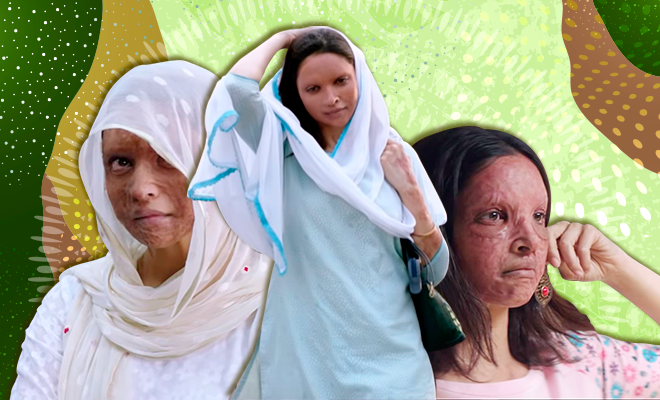 I am a cinephile and the memories I make in movie theatres hold a special place in my life. This also makes me somewhat of a movie memory connoisseur, collecting memorable moments and reliving them later. Last weekend’s release Chhapaak is one of the movies that has given me a cherishable movie memory in recent times…and it had nothing to do with the story’s obviously heart-wrenching plot or the gravity of the topic tackled. It was rather, a 5-year old little boy who was sat next to me watching the film.

Having spent most of the first half in and out of a long nap, the boy was lucky enough to be up for the one scene where Chhapaak‘s lead Deepika Padukone has not been shown with the scars. Director Meghna Gulzar seems to have made the difficult, yet effective call of making the movie about Malti’s (the lead) journey as an acid-attack survivor, and not the attack itself. This leads to Deepika’s character existing in her pre-scarred self for just a couple of minutes, a scene where she walks out of her home with naturally glowing skin and beautiful flowing hair. This exact sight warranted an enchanted “Wooow!” from the little boy, who was obviously struck by seeing such beautiful imagery on screen. This power of Meghna Gulzar’s visuals that rendered a 5-year old genuinely awestruck, is my favourite aspect of the film, among many other things.

The Power Of Costume

The film is loosely based on the real-life acid attack survivor and activist Laxmi Agarwal’s story. Since the release of the trailer, one of the things that I was impressed with the most was how much they managed to capture the essence of Laxmi in Deepika’s outfits, hair styling, and prosthetic makeup. She isn’t dressed in eye-catching clothes to be loud, her simple A-line salwar suits are enough to give off the right vibe.

The movie uses fashion to a great length to show the character’s mental state and journey. Malti is somewhere around 26 when we first meet her, a woman on the hunt for a job, fighting prejudice along the way. She is beautifully dressed in yellow, tangerines or blue hues and always has her tresses on point. She is graceful and not bothered by constant stares, carefully maintaining a side-part in order to hide the fact that she can only wear one earring.  This is a grown-up Malti that we are looking at, who when we revisit as a 19-year old survivor post-attack, is so broken that pretty salwars or accessories simply aren’t meant for her. She spends many months holed up at home wearing pajamas or unflattering cover-alls while attending school. She is also always under a dupatta, which has to be one of the most important articles of clothing for an acid-attack survivor.

The film subtly uses elements of fashion and beauty to showcase the growth in Malti. Every won is a step for her to open up and blossom a bit more. She stops hiding behind her dupatta after a memorable judgment in her favour. She sports a sleek tipped eyeliner after her PIL for acid ban finally reaches fruition. A small victory in her eyes, if you will.  She also shifts from plain white dupattas to multi-coloured ones when she’s wearing her happiness on her sleeve. She is also shown to hold a particular fondness to danglers, which she matches with her outfits. Malti’s biggest battle seemed to have been coming to terms with herself because it is true, not everybody can be inspirational in the face of adversity.

The attention to detail on the sartorial choices on behalf of costume designer Abhilasha Sharma is commendable. The same goes for makeup artist Clover Wootton, who worked on the prosthetic makeup. According to Gulzar, “The face goes through different stages. It’s a myth that if you are attacked by acid, your face melts off. Many, after watching the trailer, told me that I have shown it incorrectly. We have consulted Laxmi’s surgeon and know how the skin behaves. So, it goes through stages — redness, blisters, peeling, cracking, shedding and stretching.”, she revealed.

Malti’s choice of clothes, which I call her ‘Resistance Wardrobe’ speaks volumes of her will to fight for her cause. They are bright, showcasing hope. They are simple, showcasing humility. Combined with the well-lit shots of the film, it was indeed a sweet route to take in order to tell the story of such a heinous crime. In one scene, we see Malti and her survivor friends throw their dupattas in the air at a crowded train and it is this simple act of rebelliousness that lends the women their strength.

Meghna confessed, “It was deliberate since the content is heavy and dark. So assaulting your emotions as well as visual sense with grimness would be too much. It was a conscious decision to make the visuals bright and aesthetic, without being unfaithful to the content.”. The film flourishes on its relevant story, splendid acting (especially Madhurjeet Sarghi and Vikrant Massey) and an honest look at the life of an acid-attack survivor…they are not women who are constantly cursing life for dealing them a bad hand but influential leaders of their community who did not have their spirit broken by their attack. And that is just plain powerful.

ALSO READ: Chhapaak Is Not About Deepika Padukone, It’s About Laxmi Agarwal. It’s About Acid Attacks, Not Politics.