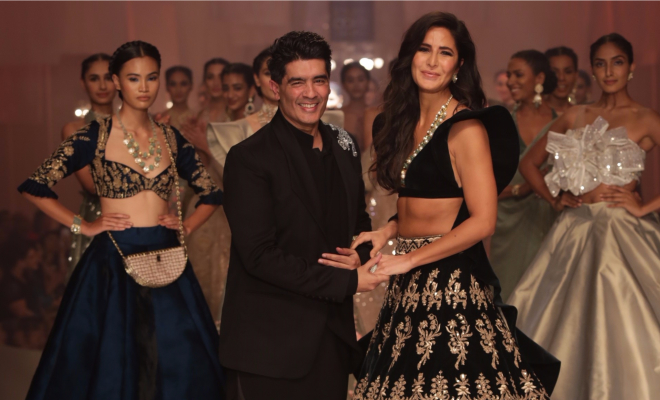 At LFW, Designers Discussed Celebrity Show Stoppers And How It Ruins The Show. We Certainly Agree That Designers Deserve The Limelight!

Just coming off the high of Lakme Fashion Week’s #5DaysOfFashion, I can honestly say it feels bittersweet. On one end, I miss the pre-show excitement to see what the biggest names in Indian fashion have in store for us for the new season. On the other end, I will not miss the long queues outside runway areas and the constant hustle to try and squeeze out time for lunch in-between shows! As fashion writers, we are expected to keep our eyes (and ears!) primed to spot any trends sprouting in a new season. But we are saving the conversation about fabrics and on-trend patterns for a later date. Right now, we want to talk about viral, albeit somewhat nonsensical trend of celebrity showstoppers prevalent in the fashion industry right now.

[Kareena Kapoor Khan as the showstopper for Gauri & Nainika]

I spent a week attending back to back shows, and the rituals surrounding them became all too familiar after a point. The shows always began with a whisper from the people around me wondering who the showstopper would be. No matter that this was meant to showcase the craft of the designer, they were somewhat overshadowed by the celebrity walking down the ramp at the end. And regardless of the fabulous display of clothes, designs and original collections presented on the runway, you can almost feel a sign of disappointment go through the crowd when a celeb showstopper never shows. This year’s LFW was a mixed bag of emotions. We had some designers standing in solidarity with the idea of not relying on big-name showstoppers. But we also had some bringing out the famous faces to wear their best creation from that particular collection. The likes of Shibani Dandekar and Malavika Mohanan walked twice for different designers on different days.

It wasn’t just me who flocked to the journalists who were there just for the art and not for the star. This sentiment was also shared by the ace designers on a special panel conducted on day 3 of LFW. Put together by the publication The Voice Of Fashion, one of the topics was the obsession fashion has with Bollywood in the country. When probed about this, a cheeky comment by designer Wendell Rodricks kind of summed it all up, “I wish Manish Malhotra was here!” he said. Malhotra, who opened up the LFW 2019 with a grand show featuring Katrina Kaif as a showstopper, has built a career out of dressing the biggest stars.

[Ananya Panday as the showstopper for Anushree Reddy]

Rohit Bal, who is not immune to controversies himself, made quite a few hard-hitting statements. He revealed, “Showstoppers are present only because of the sponsors; they are never the wish of the designer. The showstopper is mainly used by a lot of people as a disguise for the lack of their talent”. Ouch! He also added, “The history of your entire show is entirely dissolved within the given fame of the star. It takes away from the entire hard work of the designer. That 15-second-long walk of a showstopper is all that is remembered about that show”. He then went on to speak directly to the new generation of designers who can bring about real change and said, “My advice to young designers try and avoid the showstopper syndrome, it is lethal and will kill your craft. It’s Catch 22, we do need sponsors, and with sponsors come the showstoppers,”. A reality of the fashion industry that cannot be dismissed!

[Disha Patani as the showstopper for Rohit Gandhi & Rahul Khanna]

Luxury designer Shahab Durazi had some practical advice on the issue as well. She said, “I want to tell all the young designers that you don’t need a Bollywood star. And if you’re paying a star money to walk for you, use that money well to invest in infrastructure, skilled labour, raw materials, etc. You will get a moment’s fame with a star but will you able to sustain that? The sponsors have to respect the fact that they are having a fashion show to present a designer’s craft,” Durazi said. He encouraged designers to negotiate with sponsors, the fruits of which we already saw this year. Many big-name designers like Gaurang Shah and Narendra Kumar, chose to put on a show with impeccable choreography and themes. And frankly, we appreciated it with equal zest and admiration, maybe even more!

Kangana Ranaut as the showstopper for Disha Patil

Earlier, having a celebrity showstopper used to be about novelty. Designers brought out either friends (much like Shabana Azmi walking for old designer-pal Kaveri this year) or brand ambassadors to supplement the coverage. But the phenomenon of using one has gotten a bit out of hand since the star has become the news and not the show. We respect the decision a designer takes to showcase their collection, celebrity showstopper included or not. But it is also high time that a balance is struck in the way these shows are covered. A young actresses’ lukewarm debut should not be the highlight of a bridal show!

ALSO READ: Tarun Tahiliani Took A Cheeky Dig At Celebrity Showstoppers At His Show And We Love It

Check out a small moment from the Voice Of Fashion panel at Lakme Fashion Week 2019 below:

Bollywood Needs To Rethink Its Monsoon Fashion Because It Is Looking A Bit Choppy Right Now!