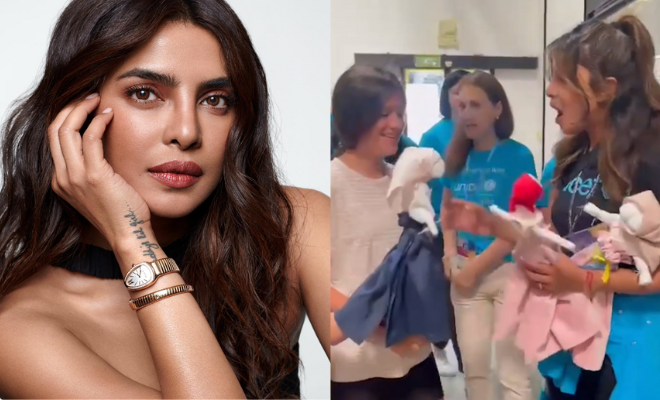 The Ukraine – Russia conflict has resulted in a lot of people suffering and losing their homes. And in times like such, I feel sorry for children and the elderly. For the most part, both of these groups are extremely vulnerable and cannot protect themselves in any capacity. Priyanka Chopra and UNICEF seem to understand this as she shares a video from when she travelled to Poland to meet Ukrainian refugees.

Priyanka Chopra, a UNICEF goodwill ambassador, uploaded a video from her trip to Poland, where she met refugees from Ukraine who had to leave their country because of the Russian invasion. She spent time with women and children while discussing the specifics of the biggest global refugee issue on social media.

Also Read: Priyanka Chopra And Lilly Singh Cheered Diljit Dosanjh At His LA Concert, And We Love This Desi Dostana!

With young Ukrainian kids, Priyanka engaged in games and enjoyable activities like painting and drawing. She received a gift of some handmade dolls that the youngsters said were given her name. She also talked to women about their experiences and became emotional while listening to one of them discuss a member of her family who was unable to travel with them to Poland.

Priyanka Chopra shared a video from her visit to Poland, “The invisible wounds of war are the ones we don’t usually see on the news. Yet, they were so evident to me today as started day 1 of my @unicef mission in Warsaw. 2/3 of Children from Ukraine have been displaced (internally and externally). This HUGE number is the devastating reality of a war where 90% of the people crossing the border are women and children.”

She then talked about UNICEF’s initiative, “The Blue Dot Centers play a very necessary role, and in many ways are a rare safe haven for women and especially the children. They offer so much…. Access to important, relevant information, mental health support, providing mother and baby areas to allow them much needed privacy, and play areas, which are so critical for kids who come from conflict situations to be able to feel a sense of normalcy.”