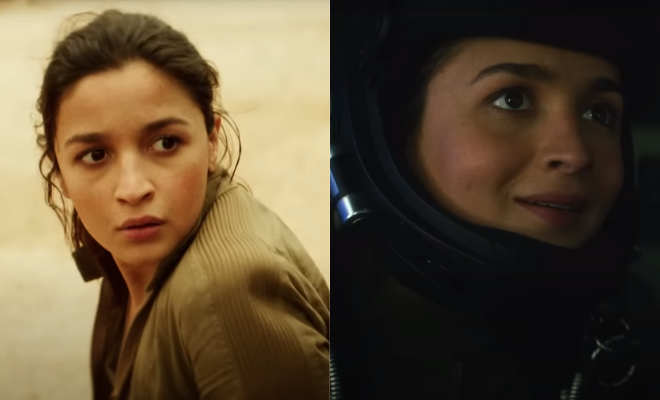 2022 has been a year full of successes for Alia Bhatt. With movies such as RRR, Gangubai Kathiawadi, Darlings, Brahmāstra and more, Alia has been on a roll and I am here for it! And while these movies and their successes are significant achievements within themselves, I was thrilled when I heard that she was going to Hollywood debuting with Heart of Stone.  And finally, the first look from the much-anticipated film has dropped featuring Gal Gadot and Jamie Dornan alongside Alia. Gal Gadot and Jamie play Rachel Stone (a CIA agent) and Parker, respectively, while Alia plays Keya Dhawan. And to say that I cannot wait to see Alia in an action role is an understatement.

The first look of Heart of Stone has scenes from the film, BTS footage, and commentary about the movie from the cast. Alia is heard saying in the first look, “It has these characters that you really connect with and feel for,” as she talks about the film. Gal Gadot says “Heart of Stone is gonna be extremely epic. It’s a super grounded, raw action-thriller.”

The first look of Heart Of Stone and Keya!💗
Coming to @NetflixIndia in 2023🍿 #Tudum pic.twitter.com/8rpUO8ovaQ

I personally wish they would have shown some of Alia’s action sequences in the first look like they did for Gal Gadot. However, this has just piqued my curiosity as I cannot wait to see Alia Bhatt in an action role. She is the one actress that has subverted my expectations throughout her career and has clearly and significantly grown while learning from her mistakes since her debut in Student Of The Year. And while 2022 has been nothing short of a year of success for her, I am certain that with a movie like Heart Of Stone releasing in 2023, the upcoming year will also be no different for her.

Also Read: ‘Hautesteppers 3.0’ Ep 8: Tisca Chopra Opens Up About Casting Couch In Bollywood, Says “No One Had The Guts To Talk To Me Like That”

Heart Of Stone will be released in 2023.