‘Atrangi Re’ Review: A Charming Dhanush Powers This Unique Love Story That Might Just Surprise You 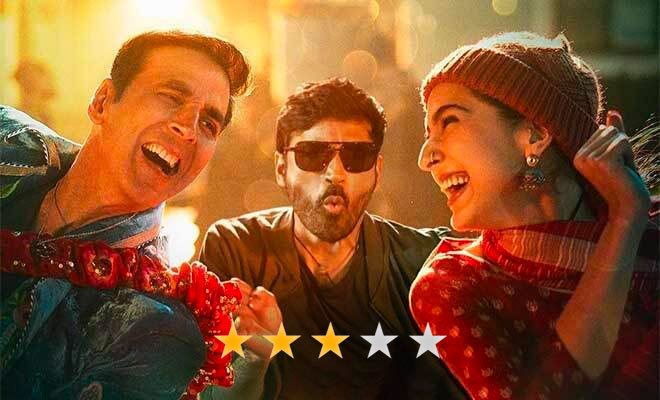 I remember when the casting of Atrangi Re, directed by Aanand L Rai and written by Himanshu Sharma, was announced, there was much criticism about another young actress cast opposite a hero that was her father’s age (and his co-star too). I know I was one of them, wondering how this film would justify a love triangle between Dhanush, Sara Ali Khan and Akshay Kumar, or was this a deliberate ploy to generate conversation around it. And Atrangi Re, which released on Disney+ Hotstar this week, opens its cards slowly through the course of the film, putting most of your misgivings at rest. And even if you guess the dark twist at the end of this love story, you’ll still be emotional when it properly unfolds. And you’ll fall in love with Dhanush all over again, like you did in Raanjhanaa, albeit minus the guilt.

Atrangi Re follows the story of a girl that embodies the title. She is like the Bihari version of Geet from Jab We Met, and I don’t mean this as a compliment. I do think Rinku is a very special character, but I do wish Sara would slightly dial down the OTT acting and just play these women at normal tempo, you know?  And even though I hate that obvious comparison, it’s actually what best describes Rinku, an orphan who lives in her maternal grandmother’s home. Her family does the whole ‘kidnap-a-dulha’ routine to get her married off because she has apparently tried to elope with a guy some 20+ times. Destiny brings Vishu to her doorstep as this unfortunate groom. A medical student from IMS, Delhi, Vishu is engaged to be married to his college dean’s daughter but ends up wedded to Rinku. On their post-marital train ride to Delhi, Rinku assures Vishu that she doesn’t want this marriage either, and tells him about her love story with her boyfriend, Sajjad, a magician, who will arrive from Africa soon to pick her up. Vishu, thus, is free to get married to someone else.

However, events unfold that catapults this simple situation into a complicated and rather unique love triangle. Revealing any more details about the plot would ruin the twist of Atrangi Re, because it really is the very heart of this film, and makes it unique.

Also Read: Atrangi Re Starring Akshay Kumar, Dhanush And Sara Ali Khan Releases Trailer. Who Is Akshay Supposed To Be?

I’ll be honest, my expectations from Atrangi Re weren’t too high because Bollywood’s track record with love stories hasn’t been that great lately. But I found myself being pulled into the story, primarily because of Dhanush. He is charming when he portrays a man in love, a love that isn’t easy, often involves heartbreak and sacrifice and trudging through morally ambiguous grounds. His Vishu is a great guy. Not to mention hilarious and pretty awkward when he is getting pissed at Rinku in Hindi.

I do have a huge bone to pick with how Rinku and Vishu’s love story begins; it is so abrupt that you wonder, how in all the stress of his forced wedding with Rinku and impending one with his fiance, was he even in the state of mind to get new feelings? Besides, I am not too fond of Sara Ali Khan’s brand of manic pixie girl acting, and I wish it could’ve been toned down a little.

Rinku’s character, her relationship with Sajjad and how it affects her feelings for Vishu, it’s quite an interesting concept explored here. However, I do feel that the film’s second half, which delves deeper into Rinku’s psyche to explain why she can’t let go of either of her loves, could’ve been written better in terms of the trajectory. At several points, it felt like mental health issues were a tad bit trivialised, and even though Rinku was living in a hostel full of medical students, it felt like she was literally one wrong move away from having a mental breakdown, and it was only because Vishu was patient, and his huge throng of friends was on board to do whatever it takes, that the situation remained stable.

And that’s actually another complaint I have with Bollywood movies, which often loves portraying the hero as this dynamic person who the entire college is jumping up to help, no matter how major, ridiculous or sometimes even illegal the situation is. I get that Vishu is a senior and has clout, but how are these friends okay with everything he is asking them to pull?

All that being said, Atrangi Re makes a pretty good effort, and to a great extent manages to keep me invested in Vishu and Rinku’s relationship, mainly because Dhanush as Vishu—with all his love, kindness and patience—has my heart. Think of it as a Bhool Bhulaiyya of sorts, except made like a typical Bollywood love story, which can, much like its actress, often go overboard with its drama. As for Akshay Kumar, I guess this time he managed to hit two social causes with one fiery arrow—honour killings and mental health. Good for him, I guess.

I absolutely have to make a special mention here for the Atrangi Re music album by A R Rahman, with lyrics by Irshad Kamil. The songs are soulful, and I particularly loved ‘Rait Zara Si’ by Arijit Singh and Shashaa Tirupati and the haunting ‘Tumhein Mohabbat Hai’, also by Arijit. Of course, ‘Chaka Chak’ by Shreya Ghoshal has been playing on loop everywhere on my social feed, thanks to Sara Ali Khan promoting it with the hook step. And both, the song and the step have grown on me!

Also Read: 5 Thoughts I Had While Listening To ‘Chaka Chak’ From The Upcoming ‘Atrangi Re’. It Was Surprisingly Good!

Atrangi Re pleasantly surprised me, NGL. I hate that I cannot discuss the theme at the heart of it without giving it away (not that it’s some major suspense, but still), because it is such an important aspect of mental health and sensitivity to mental health that the film tries to tackle through Rinku and Vishu. Love the effort to do something different, even if it is bogged down by the typical shortcomings of Bollywood movies.

If you ask me, definitely give Atrangi Re a watch this weekend, if nothing, just to fall in love with Dhanush all over again!

Atrangi Re is currently streaming on Disney+Hotstar.