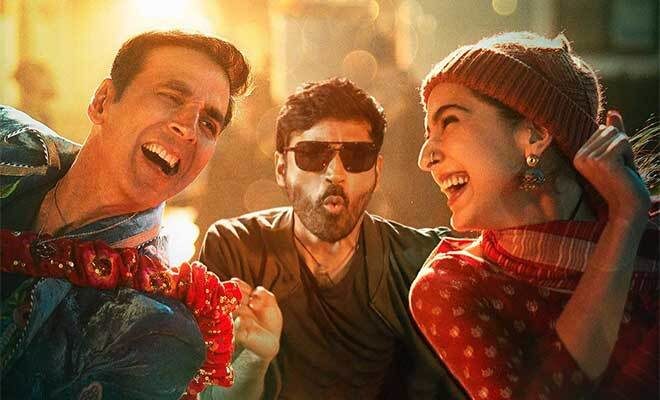 ‘Atrangi Re’ Starring Akshay Kumar, Dhanush And Sara Ali Khan Releases Trailer. Who Is Akshay Supposed To Be?

So currently we have a myriad of Bollywood movies and Hindi series’ coming on different platforms. So I was kinda unsurprised when I heard that a new movie is coming out on December 24 on Disney+Hotstar. However, it is the casting that intrigued me. Aanand L Rai’s upcoming  Atrangi Re features Akshay Kumar, Dhanush and Sara Ali Khan. Also, the trailer released today itself and has already garnered 2,89,353 views on YouTube. There was a lot about this trailer that was intriguing and confusing at the same time. Let’s talk about it with the 5 thoughts I had while watching the Atrangi Re trailer:

1. Sara Ali Khan looks pretty good in the Atrangi Re trailer. I am not an avid watcher of her movies but I do like the way she has portrayed her character, Rinki pretty well. She plays a rowdy girl from a rural region who was forced into a forced marriage with Dhanush (Vishu). I genuinely think her performance shows promise and her avatar was pretty well made.

2. Now talking about the Dhanush and his much-welcomed return to Bollywood. He portrays Vishu’s character in Atrangi Re the way it is supposed to be. Like you genuinely feel for Vishu from the trailer itself. From being forcefully married to Rinki to potentially losing her, it looks like Dhanush has done a really good job at portraying a helpless character who just was at the wrong place, at the wrong time. I am eager to see this second collaboration between him and his Raanjhanaa director Aanand L Rai!

3. However, Atrangi Re feels a bit tone-deaf and I hope that’s not the case for the whole film. There is a short scene in the trailer where Rinki is making Vishu feel uncomfortable and then says, “Agar chhed rahe hai, toh chhid jaao.” Now while I am all for good humour, I believe that normalising any gender being put in an uncomfortable situation should not be glorified or joked about. We all know that a male character saying this to a female character would not be tolerated, and rightfully so! I just believe that this should also be the case the other way around.

5. Now, I get that a trailer should not spoil the entire movie. But the Atrangi Re trailer is a bit confusing rather than intriguing. Akshay’s role in the movie has not been established at all and I still don’t fully understand it. While a trailer shouldn’t divulge the whole story it should at least intrigue the viewer and not leave them feeling lost.

Having said that, the cast of Atrangi Re is super dynamic and I want to see how all 3 of them work together. The Atrangi Re trailer was confusing enough to compel me to want to stream it just so I can see if the movie does a better job of answering the questions the trailer left behind. The film will release on December 26 on Disney+Hotstar.