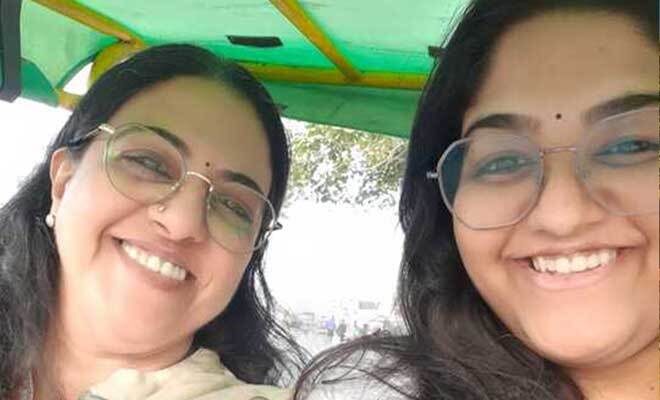 Unlike other mother-daughter relationships, my mom and I always shared a very dysfunctional relationship.

Well, because from the time I was born, our relationship never stood a chance. And that was because growing up, I was always my father’s daughter and my brother was my mother’s son.

I feel like that is a universally common statement. But what was different in the commonality was the fact that I was (and am) so different from the rest of my family – especially my mother – that it took her years trying to understand me and honestly, I was the same with her. But then, ever since my father passed away, our relationship took quite a turn.

Now, I can’t say if it was a good one or a bad one, I can just tell you that both of us have no idea where we’re going. And since that is the case, every now and then, mom and I (usually mom) come up with different things to strengthen our bond (and sometimes it definitely never goes according to the plan). So, this time, mom’s plan was to take a trip to North India. Just her and I.

Yep, I could have easily spelled the last line as a disaster because of the very fact that she and I are poles apart, which means that the same goes with our choices. We’re two crazy, indecisive women who can’t come to the middle ground to save our lives. But we did end up taking a 10-day trip to North India – that consisted of Delhi, Amritsar, and Dharamshala.

Are you wondering how we survived those 10 days? Well, let me narrate to you exactly what went down. Starting off with the packing, my mom decided that she wanted to take an age-old bag to the trip – why? God knows. But we did end up taking it, even after I spent days explaining and yelling at her not to do so. And as I predicted, the bag gave up as soon as we reached the Mumbai airport at 4:45 am. With no other choice left, we spent a full ₹10k on buying a new bag at the airport. And then spent the next 30 mins shifting all the belongings from the old bag to the new… Yes, as I’m sure you suspected, I was beyond angry.

Also Read: Sushmita Sen’s Daughter Renée Has The Sweetest Response To Questions About Her ‘Real Mother’ Which, BTW, People Need To Stop Asking!

And my mom knew it. She realised that she should have listened to me (a tad bit late for that) and constantly apologised. When I was trying to cool off, I realised that I wasn’t actually mad at her. I mean, sure I was mad, but I was mad at the situation more than at her. One of the main reasons for that was because I can fight and have screaming matches with her 24×7 but I can never see her hurt. You can think of our relationship as a love-hate one. We can’t stand each other but we really stay without each other.

Okay, that’s too much emotion. Moving on, literally and figuratively. As soon as we landed in Delhi, we took a cab straight to the hotel we had booked to rest at while we waited for the next leg of our journey. While I was planning to sleep and relax, my mom clearly had different plans. Even though we both had been to Delhi several times before, she wanted to go “sightseeing”. And so we did. We booked a cab to tour us around Delhi. Our first stop had to be a museum, more specifically the Indira Gandhi Memorial Museum. 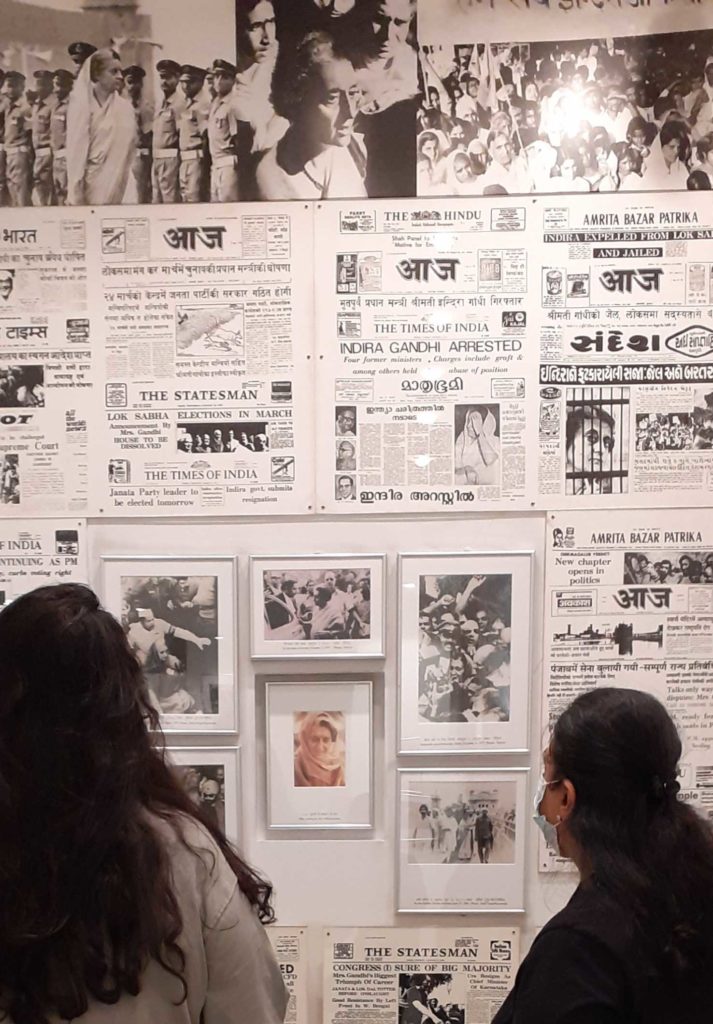 Why a museum? Well, because among thousands of differences, we share a few similarities. And going to a museum, learning about people, knowing the history, etc. was one of them. We enjoyed over an hour going through every story that was exhibited in the museum. We both enjoyed in our own ways. I enjoyed reading the stories that were displayed through different pieces while my mom enjoyed reliving the days of those who lived before us.

After a splendid time in the museum, we went to our next stop, the Parliament. What a sight! Despite the countless times I have seen it before, I can always feel the power it holds when I’m near it. While I immersed myself in the view and the environment, my mom on the other hand was insistent on clicking pictures. Now, this is another thing that is different between us. I hate taking a selfie nor do I like people clicking my pictures. I’m the kind of person that creates memories in her head or writes them down so I don’t forget (like this). But my mom? She loves getting clicked and taking pictures. In her words, these are memories that she’ll look back to. I’m not saying that she doesn’t make sense, I’m just saying, I don’t see sense in it. Well, whatever might be the case, this trip – starting from the Parliament and ending at Dharamshala – was filled with small fights at different locations about why I would just take pictures of her and not with her. 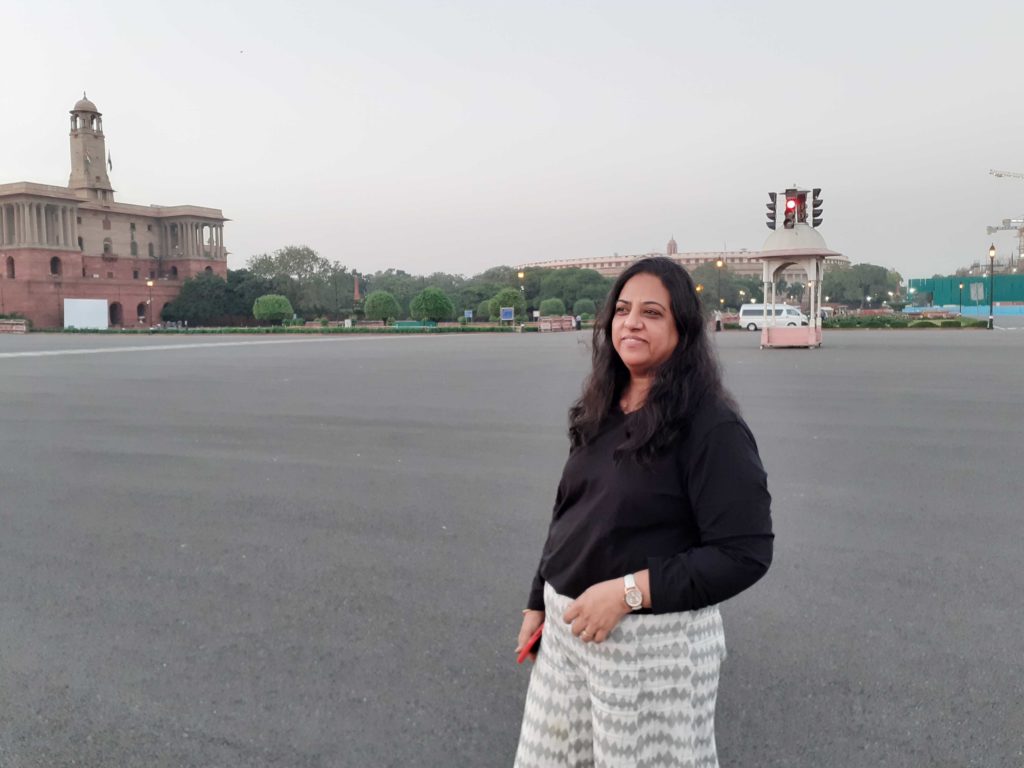 After we spent a very tiring but good day in Delhi, our cab driver left us at the bus stand from where we were supposed to board a bus for Amritsar. Once we boarded the bus, she immediately slept, drained from the busy day we had. Whereas for me? I could not sleep in an unfamiliar environment such as this. Instead, I spent the entire journey looking out of the window and listening to music, dipped in my own thoughts. Because, unlike my mom who can sleep anywhere and everywhere, I can’t and so I’m the luggage guardian in all my travel journeys. 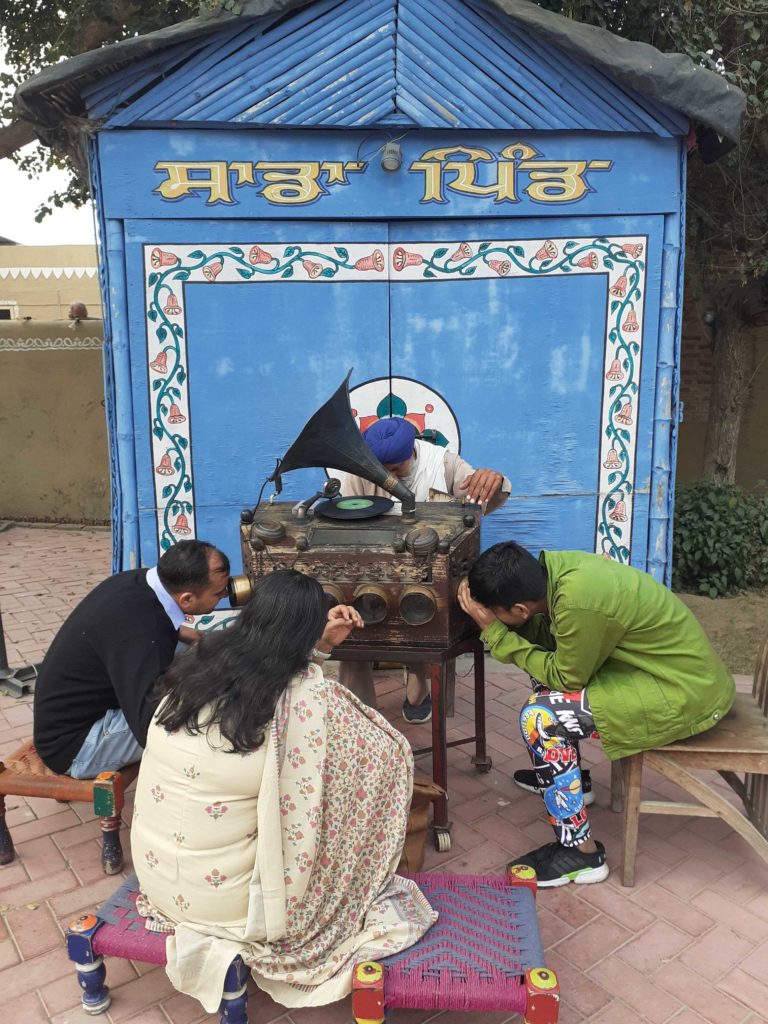 I have said this before and I’ll say it again, I’m in love with Amritsar. The amount of peace I experience by just being there, I have never experienced that elsewhere. Since we had been here countless times, after a lot of research, I had found our first new stop in this familiar old place. Sadda Pind. A hotel and living-in museum of a traditional Punjabi village where you can experience how villagers in Punjab live. We spent hours there watching magic shows, rope walkers show, sitting in a Ferris wheel, watching puppet shows, doing pottery, and so much more. After eating a typical, hearty Punjabi meal there, we made a mandatory stop at Wagah Border. 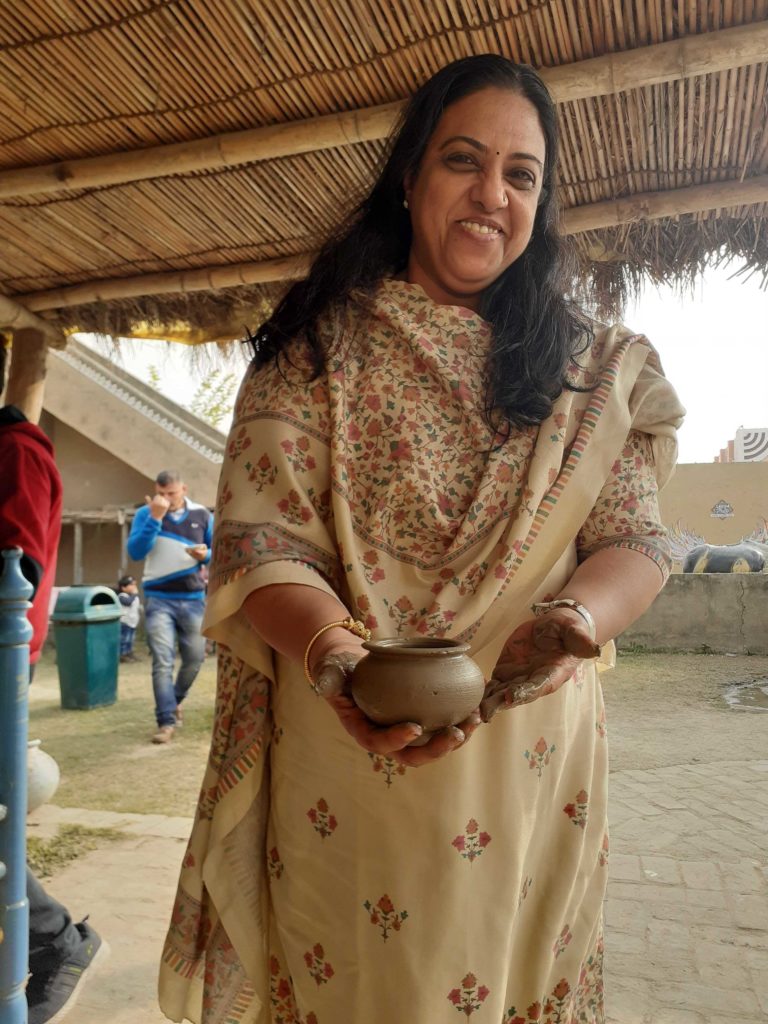 And our final destination was the Golden Temple. This temple was the main reason why I wanted to visit Amritsar. There is something very special about the Golden Temple that fills me with peace. We spent over an hour there – praying, sitting next to the water, and looking at all the fish swimming in there. So, peaceful. Another difference between mom and me is the fact that I’m not a religious person and she is. No, I’m not an atheist, I’m just not religious. Whereas my mom is the kind of person that does her one-hour-long pooja every day, in fact, she even takes the idol along with her wherever she is traveling.

Also Read: This Mother Shaved Her Own Head To Support Her Daughter Who Is Battling Cancer. It’s A Heartwarming And Touching Moment

The rest of the time at Amritsar was filled with shopping – something I dislike and something my mom loves. Onto the next stop. Dharamshala. We traveled there via bus. It was our first time sitting in a Himachal state bus and so we didn’t know what to expect. But on our journey up, we had the time of our lives! As we ascended the mountains, my mom started removing more clothes to wear since the temperature was dropping considerably. I think by the time we reached our hotel, the temperature was around 6°C. 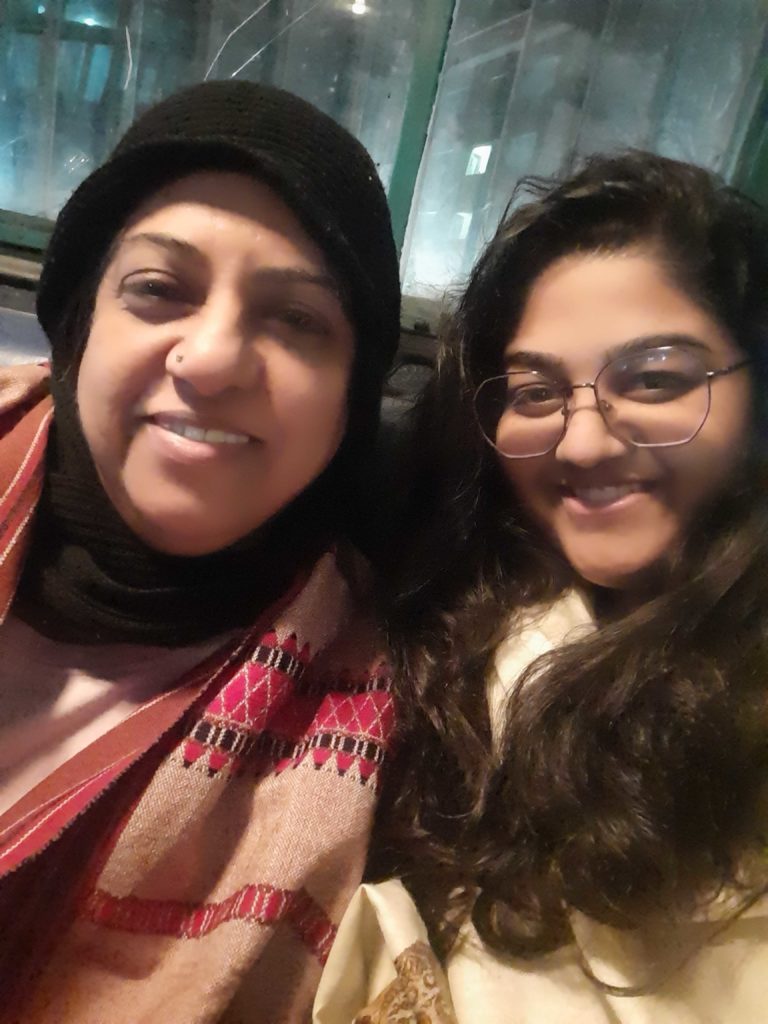 As soon as we reached there, we cuddled up and went off to sleep. The next morning we traveled to McLeod Ganj where we ended up stuffing our faces with momos and maggie. We even saw yaks and had their local Thupka with yak cheese – a must-try for everyone visiting. After visiting a few more places, we ended up shopping a bit more and ended our day. The next day we visited another museum – the Kangra museum and then went on our way to see other sightseeing points. Honestly, I don’t remember their names but I remember that all the while mom and I had a lot to discuss, and a lot to quarrel about.

Our journey came to an end when we reached Delhi again on December 11th, 2021. This time we had decided to take a train back to Mumbai. Why? Because out of all the things mom and I have in common, travelling in trains is one of them. We enjoy travelling in trains and drinking their tomato soup and eating railway catered food. I mean, I’m a die-hard fan of their Chinese. Once at home, we both looked at each other and said, “Until next time.” Yep, we said that because we can’t tolerate being next to each other for so many days together. We need a break from each other at times and quite fairly so.

Reading whatever I wrote, made me realise that so far I’ve always told you that mom and I are extremely different, except the few points where we meet, and while that is true for the most part, there is another side to our relationship that I’ve not introduced you to yet. The side of the relationship that makes me realise that I’m not that different from her after all. The side that makes me realise that no matter the differences, there are so many traits of mine that I’ve gotten from her that make me who I am. I inherited her curiosity, passion for writing, and whatever kindness I might have. And going on this trip made me realise that even more. I realised that I’m so much like her, even though I’m not. Now, I don’t know if that made sense or not, but if it didn’t, then I’d suggest taking a trip with your parent(s) and you’ll understand exactly what I mean!