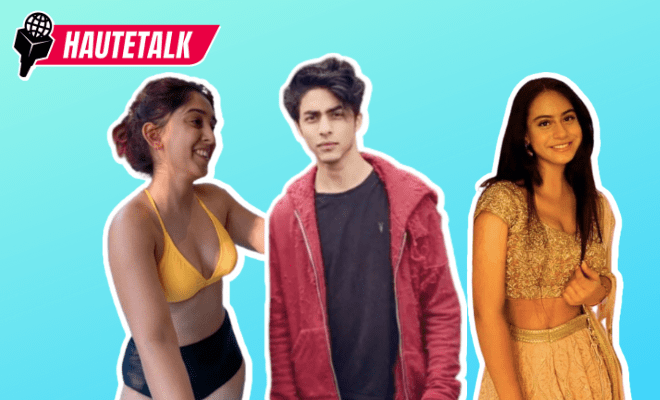 Hautetalk: Excessive Shaming Of Star Kids Reflects Our Double Standards. Why Can’t We Just Let Them Be?

Shah Rukh Khan and Gauri Khan’s son Aryan Khan has been on the radar of the trolls ever since he got arrested in the drugs-on-cruise case. Now, the authorities may have given him a clean chit but social media is far from forgetting or forgiving this star kid. Over the year, we have time and again seen star kids being crucified for the tiniest of mistakes. Not only do they become a butt of all jokes but they’re also shamed for simply existing. Recently, Aryan Khan faced flak from social media after a video of him partying at a club and drinking went viral on social media. Even though Aryan’s face is not very clearly visible in the video, several social media users claimed that it is him and commented on how a clean chit from the authorities has made things worse as the star kid continues to create “havoc” and has gone back to his “ostentatious lifestyle” among other things while several users defended the star kid and said that drinking is not irresponsible behaviour or a crime. Netizens also called out the person who shot the video for having double standards.

So Aryan Khan back to his ostentatious lifestyle! Just when Money & Power overplay Law & Order,accused get promoted for further crimes! @narcoticsbureau @dg_ncb clean chit to this accused is only going to play more havoc!
Salute to the honest efforts of @swankhede_IRS pic.twitter.com/034EYfxJ7x

But Why Is Aryan Khan Being Shamed?

Now, here’s our take on this. We all tell our parents to not judge us or our friends for partying or drinking when they say things like “log kya kahenge”. We always talk about being non-judgemental and believe in letting people be but yet we continue to judge them simply because they’re more privileged. We pass frivolous comments on these star kids and their lives only because their parents are public figures. We don’t hear anyone complaining about all the other kids partying at the same club or their privilege, do we now?

Truly infuriating.. how can we feel safe & confident when the system continues to side with such folks "drunk" on affluence & influence.??!!#BoycottBollywood#BoycottBollywoodForever

Having said that, it’s also important to note that we tend to judge these star kids only due to their privilege and bank balance. We sit in the comforts of our home and pass judgements about star kids like Aryan Khan for living a rich and lavish lifestyle and spending their father’s money but the question is if we had that privilege, would we not do the same? Would we not spend our parent’s money to continue to maintain our lavish lifestyle and enjoy the riches? We come from a generation of people who grew up watching cartoons like Richie Rich and we never judged Richie, did we? Yet we continue to judge Aryan Khan and all those like him, only because he was at a club enjoying a drink?

Speaking of drinks, how many of you can say that you haven’t been to a bar or a club and enjoyed a drink every now and then? We work throughout the week and party away the weekends. Sure, we do it with our own hard-earned money but if you had papa ka paisa, would you not put it to good use and enjoy it a little more? Most of us (including our parents, in some cases) consume alcohol yet we crucify young star kids for enjoying the same way that all of us do. The only difference is that this kid has more money than we could ever even imagine. Isn’t it double standards to judge someone for doing exactly what any of us would do if we were in his situation?

Others are using this video to point out #AryanKhan being irresponsible.
I see him being super responsible. Observe how he masks up right after taking his shot. :)) https://t.co/rjTExxg1YQ

Moreover, there are several other young people around Aryan in that video, who can be seen having fun, dancing and drinking. Now, many of these people may come from well-off families with good money and backing but our hatred is only targetted at Aryan Khan and the reason, he’s Shah Rukh Khan’s son and he was arrested and accused in a drugs case but most of us forget the one thing that our justice system is based on – innocent until proven guilty and Aryan Khan was not proven guilty and was in fact given a clean chit and yet we cannot let the poor kid live.

Could this be because somewhere or the other, we might be envious of these star kids for having a privilege that we ourselves don’t have? It’s not that coming from Bollywood families makes them less worthy or less talented or less hard working. But our dislike for them is never-ending. Probably because we can never have what they do because they were born with a silver spoon in their mouths and we didn’t.

Aryan Khan is not the only one who has been shamed for simply being a star kid. Over the years, we’ve seen many other star kids being brutally trolled for something as simple as wearing what they want and doing what they want. Nysa Devgn was once trolled for going to a salon just a few days after her grandfather, Veeru Devgn’s death. Why? Can a woman not care about personal grooming because someone in the family died? Sara Ali Khan was schooled by the internet once for dressing “inappropriately” while going out for lunch with her father Saif Ali Khan and brother Ibrahim Ali Khan. Who are we to tell her what is and isn’t appropriate for lunch with HER family? Ira Khan was also shamed for wearing a bikini at a POOL PARTY-themed birthday celebration with her family including her father. But the question is, why can a girl not wear what she likes and wants when her father is around? Why is disrespectful for a woman to wear clothes of her choice in front of a man who fathered her? SRK’s daughter Suhana Khan has been slammed by the media and social media for avoiding the paps. Why is it that we hate these star kids for just existing?

We all have an unhealthy obsession with star kids and their lifestyles to the point where we closely follow their Instagram handles and want to who wore what when and where. We love reading up about them (if you want proof, read the stats of an entertainment and gossip portal). We hate nepotism but we never question paps on why they’ve been following star kids around or why are they being written and talked about. Maybe you can start the change by not reading about star kids and not obsessing over their lavish lifestyle.