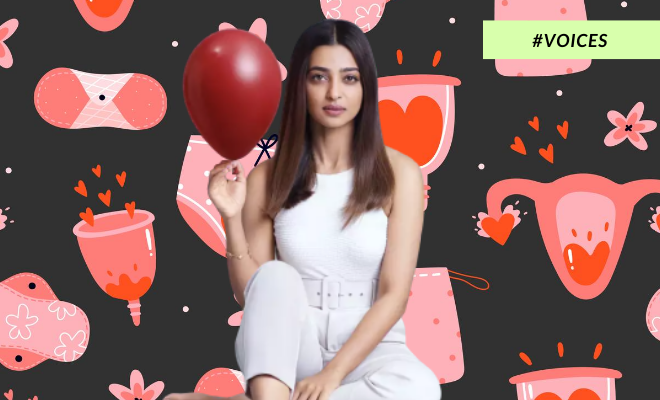 #Voices: This Sanitary Napkin Brand Showed Red Blood Instead Of Blue In Their TV Ad. Are We Finally Getting Real About Periods?

Periods are not to be discussed, period! That’s what we’ve been told by everyone our entire life. But does anyone even know why? Is it because they are perceived to be disgusting and gross? Or is it because it is an embarrassing topic to speak about since it is a feminine issue? Or maybe because of the myths like periods are dirty and menstruating women are a bad omen. Or maybe it’s all of the above!

The lack of conversation about this unmentionable matter leads to lack of knowledge. When I was young, nobody discussed it with me and the only source of information I got was from the TV commercials. But they weren’t a great help either. See, because these sanitary napkin ads only helped perpetuated this stigma and fuelled the misleading notions time and again.

No, not only because women in these ads are shown hopping and running around in tidy whites on the first day of their period (seriously, nobody in their right mind would do that) but also by showing false depiction of periods like using some weird blue liquid on pads instead of red—the actual colour of blood.

Someone please tell me who even came up with this ridiculous idea of using “blue” to show blood? What were they thinking? Plus, all the other brands followed suit and shut down any chance of society getting real about menstruation. Good job hiding the natural truth of life while running it on the national television for years!

Thankfully, things are changing now, albeit slowly. The latest ad campaign of The Rio Pads is proof. The ad starring Radhika Apte shows the blood-like liquid oozing out of a red balloon while she talks about how it feels to have heavy flow during periods. This revolutionary ad has challenged the archaic conventions about period stigma and the broke “blue blood” nonsense the right way.

Also Read: In Kerala, A College Magazine Is Getting Flak For Talking About Menstruation And Rape Culture. Apparently, It’s Taboo. Oh FFS!

Radhika Apte who is the brand ambassador for The Rio Pads recently made a statement regarding the ad. She said, “I have said this earlier and I will say it again. I do not see the issue in showing actual blood. Blood in a fight sequence in a film is fine but not for periods? Why can’t we just show what heavy flow is really like? Why can’t we show blood?  I am glad that Rio has taken up this challenge and they are standing by it with conviction. Getting a go-ahead on this advertisement is very reassuring. If this ad can start even a single conversation, then that is a win for all the unheard voices. If we can remove even an iota of stigma around periods via this ad and encourage people to accept it as a normal and natural phenomenon then it will be a big win for us all. Period.”

Rio Pads is the first Indian brand to have broken this tradition of using blue to represent period blood. Before this, a US brand U By Kotex and Australian feminine care brand Libra destigmatised periods by showing red blood in their TVCs.

Kartik Johari, Vice-President, Nobel Hygiene, said, “We are extremely proud to take this first step on behalf of all the women in India. There can be no talk of education, awareness or equality when the biological truth of half the population is censored. Our resolve to continue this conversation has been renewed, starting with the depiction of blood. To show the unaddressed problem of heavy flow, without showing blood itself, is so absurd a concept that it didn’t even occur to us. All our communications are deeply inspired from our research, showing the first true and honest representation of periods for consumers. Awareness is needed, and conversations can only begin after acknowledging reality.”

He added, “We took special care to ensure our communication remained as authentic as possible. The entire creative was scripted by a woman, based on real narratives from women, directed and shot by a woman, and is being marketed by women. Additionally, 1,000s of women have already applauded our product and messaging; we are proud to have brought this innovation for Indian ladies who receive no respite from heavy flow. We are sure that other players in the market are excited by this new paradigm, and we call upon everyone to take advantage of this exciting shift to educate and reconnect with their consumers!”

While thousands of people applauded the ad, there was some backlash and complaints about the ad too. That’s not shocking at all, but what is, is that these complaints were from some women as well. “The complaints varied in nature but split into three buckets. One was people were simply shocked to see red blood on TV. Second bucket was ‘I saw this ad with my children. How am I supposed to explain this red blood on TV coming out from a balloon to my kids? Third bucket was women themselves feeling that everyone knows what periods are, why do you want to show it on TV? This one woman said that we don’t even discuss our lingerie size in public, how can you show something so private and intimate on TV,” Kartik said. Can you believe that?

This may seem like a tiny step but is a great start to bring in a wave of change in the spotty history of period taboos in India. TV commercials are a great tool to change people’s mentality and perspective and this was one progressive and much-needed change that was long overdue. If ads like these can normalise periods and help start up conversation, it’s win for all of us. I mean it’s 2020, if we still can’t get real about something as natural and normal like menstruation, what’s the point even?

Also Read: Shruti Haasan Talks About Periods, PMS, PCOS And Why We Get Sanitary Napkins Wrapped In Black Bags. Period Shaming Is Real