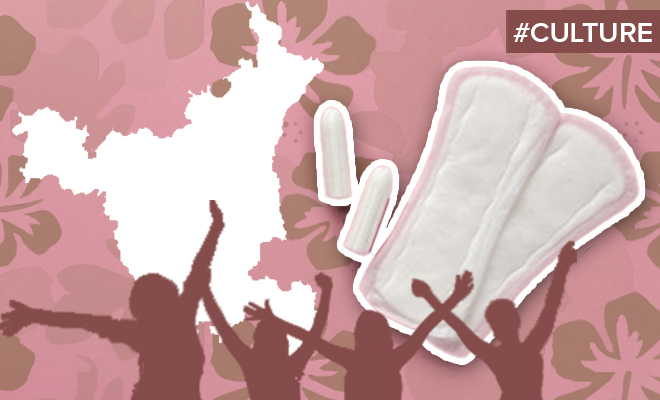 #Voices: 22.5 Lakh Women In Haryana To Get Free Sanitary Napkins For A Year. Accessibility Is The First Step Towards Empowerment

We can talk about empowerment all we want. But true empowerment happens only when there is an easy accessibility to the tools that foster it. For example, you want girls to get educated? Then the first step has to be ensuring every girl child in the country has access to a school in their locality. You want to get the population under control? You make sex education mandatory, and provide easy access to contraceptives and family planning centres. And if you want women to not be limited in any sphere by menstruation and related problems, you first and foremost make sanitary hygiene products easily available to them. The Haryana state government seems to have gotten on the right track, by announcing free sanitary napkins for a whole year for girls and women below poverty line (BPL).

In an announcement on August 3, Women and Child Development Minister Kamlesh Dhanda said that Chief Minister ML Khattar would launch the ‘Mahila Avm Kishori Samman Yojana’ on August 4 for girls and women living below the poverty line. As a part of this scheme, 22.50 lakh women of menstruating ages (10-45) would be provided free sanitary napkins every month, for a year. The Haryana government, Dhanda stated, was committed to ensuring all-round development and empowerment for women. And for that very purpose, Rs 30.80 crore would be allocated to implement this scheme in the state.

In addition, Dhanda announced another scheme called the ‘Mukhya Mantri Doodh Uphar Yojana’ that would make fortified flavoured skimmed milk powder available to 9.03 lakh children and 2.95 lakh pregnant and lactating mothers in the state. Around 200 ml of fragrant skimmed milk per day for six days would be distributed under this scheme to the needy, in a bid to reduce incidence of malnutrition.

Anganwadi workers would play a huge role in the implementation of both the schemes, and will go door-to-door distributing sanitary napkins and fortified milk powder to those that qualify under the scheme’s ambit.

The Haryana Government seems to have made some tremendous strides in introducing schemes and policies to empower women in their state. Its skewed gender ratio has always been one of the worst in the country. But as the state works towards improving it, there is also a focus on bettering the lives of its female residents. In an effort to further embolden its initiative to remedy the gender imbalance in the state, Haryana Deputy CM Dushyant Chautala also announced and amendment of the state’s Panchayati Raj Act, to include a 50% reservation for women in its Panchayati Raj Institutions (PRIs). There would also be incentives for the women who do their work exceptionally well.

Also Read: #Voices: Haryana To Introduce 50% Quota For Women In Its Panchayati Raj Institutions. Is There Hope For More Women’s Issues To Be Addressed After All?

Another important announcement made last month by CM Khattar was about providing passports to every girl student who graduates from university. This further enables them to aspire for higher education abroad.

While the Haryana Govt. sure seems to be amping up its women empowerment module with these new policies and schemes, and focusing on accessibility as well, we’re all a little too familiar with the way bureaucracy works in India. A thorough, transparent follow-up on how much of implementation has actually penetrated into remote areas and actually been made available to those who need should also be made available with equal gusto.

Also Read: Every Girl Graduating From College Will Get Their Passport Along With Their Degrees, Says Haryana CM. This Is Great