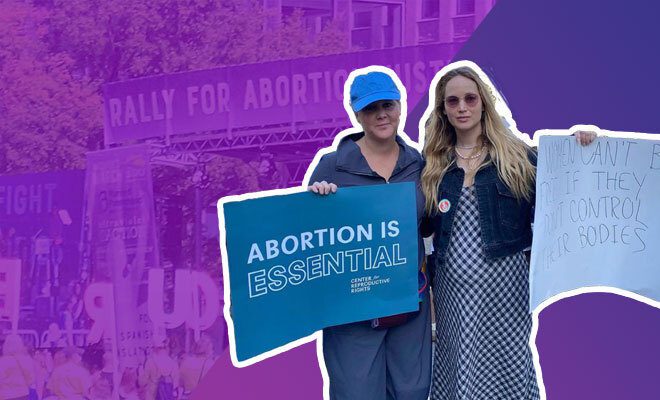 At The Women’s March, Thousands Of Women Rallied To Save Abortion Rights. Spotted Amy Schumer And Jennifer Lawrence!

For years now, men have dictated every single aspect of a woman’s life, including her physical being. Women have no right to make decisions regarding their own bodies. How ridiculous is that? It is just common sense that any decision regarding her body should be her call, especially that of abortion. Whether a woman wants to conceive a child or not is her call. And that is because it is a woman’s body and mind that undergo a ton of changes that are irreversible and often unpleasant, and she has the right to decide whether she wants to undergo them or not. But not all legal systems recognize this. Take the instance of Texas, United States, which recently passed the most restrictive abortion law yet. And to protest it, thousands of women in the US participated in the Women’s March, with abortion as the main agenda.

Yesterday, POTUS Joe Biden’s administration urged a federal judge to block the most restrictive abortion law which has banned most of the abortions in Texas since September. The anti-abortion bill passed in Texas bans abortions after six weeks (that is before many women realize that they have conceived) and with no exceptions for rape or incest.

Thousands of people—majorly women—in the United States marched to oppose the law and show support for women’s reproductive rights. From abortion rights activists to the general public, to celebrities gathered at over more than 600 marches that are taking place across the US.

Also Read: This Guy Got Offended Because His Partner Chose Abortion. And So, The Internet Schooled The Entitled Guy

The ‘Rally for Abortion Justice’ marches saw women and people holding cards that read, ‘My mind, my body, my choice’ and ‘Legal abortion for health and life.’

Rachel O’Leary Carmona, the executive director of Women’s March told CNN, “I think it’s important to understand that pretty much everybody knows somebody that’s had an abortion… It’s important for us to hear all these stories,” she said. “It also is a bit of a tragedy that you know, folks have to put their pain out on display for us to be taken seriously. So what we’re trying to do today is make sure we all lift our voices in solidarity with each other to make sure the folks in power hear our message.”

Out of the number of people that were present at the march, a pregnant Jennifer Lawrence was also seen holding a placard reading ‘Women can’t be free if they don’t control their bodies’ on Freedom Plaza in Washington, D.C. Alongside her was Amy Schumer who held a Center for Reproductive Rights sign that said, “Abortion is Essential.”

Also Read: Women In Poland Take To The Streets To Protest Against The Government’s Near Total Ban On Abortions. Women Need Their Choice Back!

In fact, Amy Schumer even took to her Instagram to post a picture of her and Jennifer Lawrence at the abortion rights march and even added a personal commentary in the caption. Her caption read, “I don’t have a uterus and she is pregnant but we out here @womensmarch @plannedparenthood #rallyforabortionjustice 🙌🏼🙌🏼🙌🏼” Her picture on Instagram got attention from other A-list celebrities like Sharon Stone, Kate Hudson, Rosanna Arquette, Mary Lynn Rajskub, Ali Wentworth, Rachel Zoe, and others.

The LA march saw a lot of celebrities partaking in the protest against the restrictive abortion law. Celebrities like Patricia Arquette, Alyssa Milano, Christine Lahti, Raven-Synomé, and Debbie Allen. Whereas Padma Lakshmi and Gail Simmons showed their support in Houston, Texas. Many others posted about it on social media.

Irrespective of the marches and protests taking place all over the US, the Supreme Court has denied the request to block the Texas law and the women now fear that it might encourage other states to follow suit and pass anti-abortion laws.

The fight for women’s right to abortion has been a long one and is still continuing. The law passed in Texas earlier in September is one of the most restrictive abortion laws yet. So the Women’s March is not wrong to fear that if the law is not blocked then other states might follow suit. Even though I’m here in India, I am in full support of the march that pushes for women’s reproductive rights. It is, after all, her body and her choice. And no one can take that away from her, not even the law!