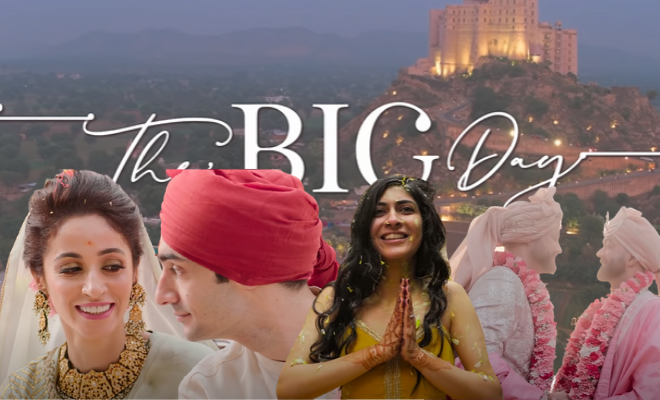 ‘The Big Day’ Trailer: Do You Take This Netflix Show, In Binge And In Cringe, As Your Next Watch? I Do.

Reality is stranger than fiction. And perhaps that is what makes scripted reality shows so irresistible. You know, like carbs? They’ve got the good, the bad and the ugly in them. If you ask me, that’s a balanced meal, alright. And Netflix India seems to have cracked the recipe that would tickle the palate of its Indian audience, both in India and abroad. After the highly talked about Indian Matchmaking, and the highly meme-able Fabulous Lives of Bollywood Wives, it’s come up with The Big Day, a show that explores the multi-billion dollar wedding industry in India through the lavish weddings of a dozen Indian couples.

Think Umaid Bhawan-level weddings, swirls of Sabyasachi lehengas, exquisite decor straight out of a Karan Johar movie, with the airbrush effect of a Namrata Soni makeup look and the finesse of a Joseph Radhik and The Wedding Filmer wedding album. Yep, the finest of the fine in the wedding business are probably going to be party to this celebration of the grand Indian wedding.

But turns out, that’s not all that The Big Day promises to bring to us, come D-Day. According to the show’s official synopsis, the show chronicles modern Indian weddings. And this means, we’re probably going to get to see some of the more interesting revisions that millennials have made to the desi shaadi setup. For example, the trailer gives us a glimpse of a same-sex wedding. And there’s also going to a sustainable wedding and a bride who defies blindly following traditions.

Hmmmm, interesting, right? It is. But then again, there’s also the point that this is Fabulous Lives and Indian Matchmaking all over again. Meaning? It’s going to be a bunch of rich peeps, doing rich shit, and hyping up first world problems. And I says this in the most tactful and respectful manner, with no shade being thrown. Hey, I love a good wedding, but will I find this relatable?

Here are five thoughts I had after watching The Big Day trailer on Netflix.

1. Netflix seems to be more invested in the ‘desi shaadi’ business than rishta aunties, man!

Where is the lie? We’ve already gotten a documentary on Sima Taparia’s daughter’s wedding up on Netflix. Then there’s Indian Matchmaking. And now The Big Day seems to be like the ultimate sequel to the latter. I can totally picture if Pradyuman from Indian Matchmaking had gotten married, his wedding was likely to be featured on the show.

The show is also dropping on a very opportune day—Valentine’s Day. Which means if you’re married, then you could binge watch with your spouse and make comparisons/have regrets. If you’re coupled, but unmarried, then you can gather inspiration or feel the pressure to get married, depending on the status of your relationship. And if, like me, you’re single, you can go ahead and make memes and jokes about everything while secretly hoping you find a Nick Jonas for yourself so you can have one of these lavish weddings in your custom Sabyasachi bridalwear.

I tried showing Indian Matchmaking to my parents, in the hopes that they’d have a good laugh and realise who ridiculous some of their arranged marriage ideas can get. Unfortunately, that didn’t work. I’m still trying to figure what angle I can apply for this one.

2. The show is about modern Indian weddings. And I’m intrigued to see what that entails.

Look ‘modern’ in India is still kaafi traditional. So it’s going to be interesting to see what ‘range’ the show lays down to capture how millennials have transformed the traditional Indian wedding. I think I am personally most excited to see the same-sex wedding—it looks beautiful and since I haven’t been to one before, this is going to be something I’m looking forward to attend, at least on screen!

Modern also means a lot of ridiculous notions about weddings, particularly the fact that some of the rituals and traditions are a sheer waste of time, energy and money and completely don’t make sense right now, might be questioned. The Indian wedding is inherently patriarchal in its existence. So I hope that there are couples here, and families, who’re smashing the patriarchy with the same efficacy as they smash the coconut during the puja.

If Indian Matchmaking got the new generations to look at arranged marriages in a different light, then perhaps this show could change the rigid perceptions around certain archaic wedding traditions for the better?

Also Read: Netflix’s ‘Indian Matchmaking’ Cast Reveals Their Side Of The Story. Is There Redemption For Arranged Marriages After All?

3. Needless to say, there’s going to be outfit, jewellery and trend inspo galore.

I mean, come on! Let’s not forget the biggest motivation to watch the show! I’m going to be making notes!

4. This sure looks like a Fabulous Lives wedding edition. Not relatable, mostly aspirational, and a dubious balance of binge and cringe?

My biggest fear for The Big Day is that it could veer into the cringe binge territory, like Indian Matchmaking and Fabulous Lives did. Which isn’t necessarily bad, because the conversations that these shows spurn are good for business for Netflix and good dialogue for social change as well.

What I then hope is that Netflix has been experimenting enough with this format now to get it right finally. I hope that while it turns on the extravagance, which BTW is what Indian weddings are all about, it finds a clever way of going OTT. For example, I enjoyed Indian Matchmaking because I thought it was a clever satire cloaked in a docu-drama. But not everyone thought of it that way. And Fabulous Lives was just all glitter with no tact or substance. In that way, The Big Day has a very tricky formula to crack.

Come on, that’s a no-brainer. We are. It’s going to the rough equivalent of the Zoom weddings that we’ve been attending all of 2020. We get to be in our PJs, snacking on whatever we want, while watching lavish weddings without worrying the video would get turned on! And we get to judge people for their choices.

What’s not to love?

The Big Day: Collection 1 will feature six couples’ weddings and drops on Netflix on February 14, 2021. A second collection, with the other six couples, will apparently be out soon.

Millennial Brides Are Making Their Photoshoots Cooler With Wedding Placards. Here’s How To Put Together The Most Adorable And Fun Props