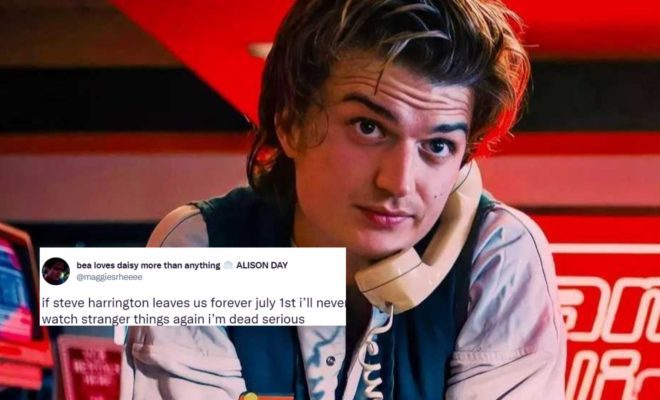 Assuming you too are a Stranger Things fan and just like me are waiting for the remaining two episodes of the fourth season. We are all definitely dying to see the final showdown between Vecna and Eleven. While that is still awaited, one of the most adorable characters of the show Steve Harrington played by Joe Keery has currently become the topic of discussion on Twitter. Apparently, there have been some weird predictions around the character’s death in upcoming episodes of the fourth season. His fans already have made up their minds as to what they will do if this theory is proved right.

Steve Harrington’s charm in Stranger Things 4 is definitely loved by all the fans of this show. He is undoubtedly the cutest babysitter- if you know you know! Since the two remaining episodes of the fourth season are yet to be released on July 1, the Steve Harington fans have already come up with this new theory of the character dying. Based on this theory, fans have taken to Twitter to declare that they would stop watching the show if this happens. The theory itself has sparked strong reactions from the Steve Harrington fans. A Twitter user stated that if Steve Harrington dies on Jule 1, they will stop watching the show and there were many other reactions that followed it.

they kill steve and they kill us-

Also Read: Stranger Things 4 Vol. 2 Trailer: Vecna vs. Eleven And The Gang Is Going To Turn Our Worlds Upside Down

Joe Keery’s character Steve Harrington is so popular on the show for being the baby-sitter but also the savior of the group. Post the first season of Stranger Things, the character of Steve Harrington became a crucial part of the series and was one of the main protagonists of the show. The character was in the first season shown in a negative light, however, the build-up of the character has really been impressive throughout the other season. Also, he is always the babysitter of the kids, and this fact has never changed in the seasons. So a prediction about losing an important character by the fans has increased the hype for the upcoming two episodes even more.