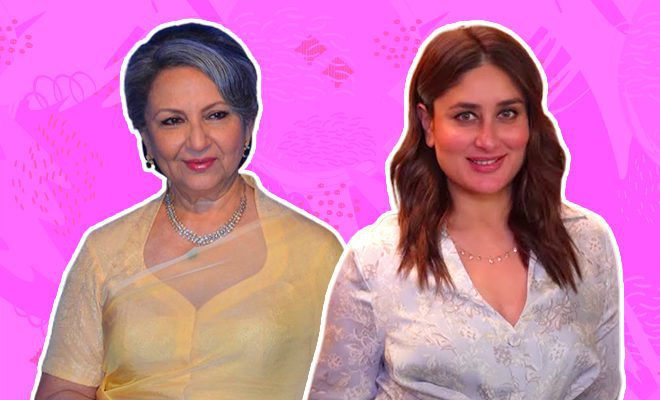 We won’t ever know the true nature of what goes on within Bollywood families. But once in a while, a celebrity will get candid and talk about their dynamic with other members of the family. And it makes you hope things truly are as easy going as they portray it for us. Furthermore, since most of our country loves emulating Bollywood celebrities in every way they can, one can also hope that people who read or watch these interviews would have some positive takeaways them. Recently, Sharmila Tagore gave an in-depth interview about her work and family life. And watching her talk about daughter-in-law Kareena Kapoor Khan was rather refreshing. Talk about ideal saas-bahu dynamics!

The former CBFC chair sat down with TOI for an exclusive interview where she talked about being on a sabbatical for health reasons, which make it unsafe for her to return to work with the threat of the third wave looming over. And when she does come back, fans can expect her to turn her attention to OTT, since that is a medium that has very excited. She told TOI,”I want to work in the OTT space. You feel that flexibility; everybody our age is watching them at home and going to the theatre is only for the film buffs and the young people. Of course watching a film in a theatre has got a different feeling altogether and I am not rubbishing it at all.”

Sharmila Tagore also talked about how proud she is of how far son Saif Ali Khan has come in his career since Yeh Dillagi, how mature he has become, and how he is a good father to his four children—Sara, Ibrahim, Taimur and baby Jee—while being a voracious reader and a good chef! But wait till you hear her talk about her favourite—daughter-in-law Kareena Kapoor Khan!

Also Read: Sharmila Tagore Says The Onus Is On The Guy’s Family To Make A Bride Feel Welcome. We All Need A Mother In Law Like Her

Talking about Bebo, Sharmila Tagore said that she is quite fond of her and loves the fact that Kareena is so patient, calm and composed, sometimes even more than her.

“I have seen her interact with her staff, her hairdresser and designer. I would sometimes snap at my hairdresser if we were being summoned and I would say zara jaldi karo, but not Kareena. She is very patient and I love that about Kareena. Her presence calms me. She doesn’t compare herself with anybody. She does her own thing.

Sharmila concludes on a note that is the sweetest summation of her and Kareena Kapoor’s relationship. “I am very happy that she is my daughter-in-law. She says, ‘I am like your daughter’. I say, ‘Yes you are’.”

I am not gullible to think that every toxic relationship we see on saas-bahu shows is real or that there aren’t MILs and DILs out there that don’t share such easy camaraderie. But as I mentioned before, celebrities and their lives are the source of constant curiosity for regular folks. And they often set trends that get emulated. So this little nugget about Sharmila Tagore and Kareena Kapoor Khan’s relationship might just inspire people to look at saas-bahu relationships differently. They can be friends, and it is not always daggers, y’all!

Ex-CBFC Chairperson Sharmila Tagore Sees No Rationale In Abolishing Film Certification Appellate Tribunal, And Neither Do We