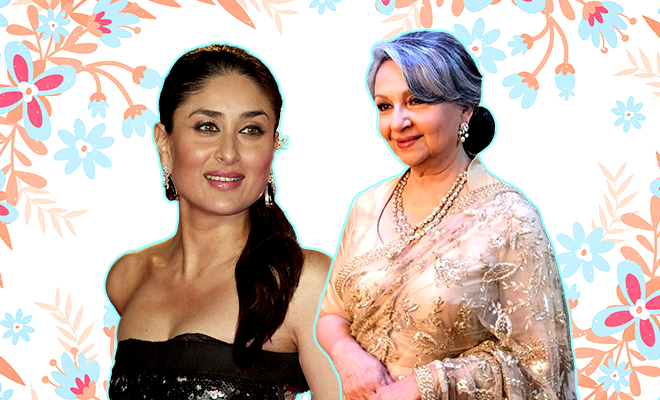 Sharmila Tagore Says The Onus Is On The Guy’s Family To Make A Bride Feel Welcome. We All Need A Mother In Law Like Her

You know how they say that in India when you get married, you aren’t just marrying the man but also his entire family? No matter how modern we get, when it comes to our culture that is a fact. I have heard of so many stories where marriages have broken up because of an overbearing mother-in-law. Always scheming and plotting to make your life utterly miserable, that is the image I have of a mother-in-law and frankly, it really scares me.

Then I watched Sharmila Tagore on Kareena Kapoor’s show and my very cynical perspective may have been altered a little. They are both such graceful, iconic women who carry themselves with such elegance it is tough to take your eyes off either of them. And now thanks to Kareena’s talk show What Women Want, we have a deeper understanding of what a relationship between a daughter-in-law and mother-in-law could also be like. And nope, it’s not all tantrums and taunts.

Kareena Kapoor’s radio show also has parallel video content being created and the first guest of What Women Want season 2 was Sharmila Tagore. They discussed a lot of very interesting things, but when I watched the interview what jumped out at me was what Sharmila Tagore said about being a mother-in-law and about welcoming a girl into the family after marriage.

Also Read: Kareena Kapoor Khan Talking About Balancing Work And Family Is The Story Of Every Working Mother Ever

One of the questions that Kareena asked her was what the difference is between a daughter and daughter-in-law. To answer that Sharmila Tagore says “The daughter-in-law is coming to your house, so you need to welcome her. You need to make her more comfortable.” She further added that the onus is on the boy’s side to welcome the girl and make her feel comfortable. It is a new relationship that they are building and instead of taking over and interfering, a mother-in-law should give them space and allow their relationship to grow instead of trying to take over.

Isn’t this what every future daughter-in-law is looking for? I know the day I get married I want a mother-in-law who is as kind and understanding as Sharmila Tagore is. Once married, the woman is expected to leave her parents behind and go live in an environment that she isn’t used to. This is what has been happening for generations now, though nuclear families are becoming more and more common. Mostly though, the mother-in-law will always be in the picture. That is why every girl needs a mother-in-law who can make her feel welcome into a new house and just give her space to settle in without making her feel pressurised.

In a country that thrives on stereotypes, here is one mother-in-law that has no problems in crushing them!

Kareena Kapoor Shares How Saif Ali Khan Silently Supports Her. Where Do We Find A Husband Like Him?