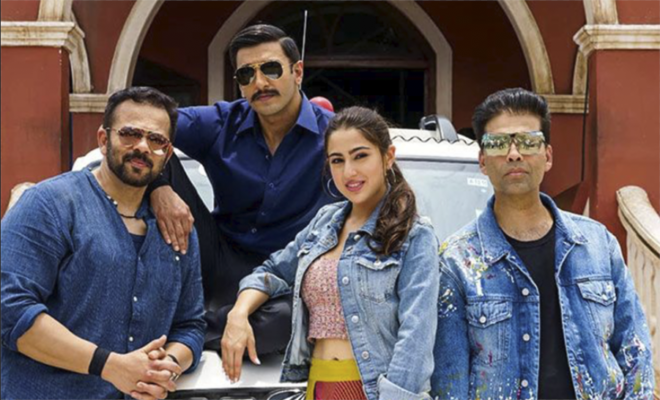 You guys, Ranveer Singh starrer Simmba sequel is on its way and I can’t help, but admit the fact that it doesn’t have me excited. Yes, for all Ranveer Singh and director Rohit Shetty fans who love to see the cars jump for no apparent reason and action that serves to the fantasy of a true blue Bollywood masala, the second part of Simmba is in the pipeline.

Confirming the news, Ranveer Singh shared with a portal, “It was always intended to become a franchise and I think whenever Rohit sir wants to make Simmba 2, I’ll be game because Simmba is my favourite character to play…. I love being Simmba. We can all hope that it happens sooner rather than later.” Comparing the film to dal chaawal that needs a mandatory mention after having sushi from around the world (really? Why demeaning dal chaawal?), he explained why he is excited to start  filming soon.

A cop drama, similar to Rohit Shetty’s blockbuster Singham, the 2018 film Simmba revolves around the life of a corrupt cop Sangram Bhalerao A.K.A. Simmba played by Ranveer Singh, who undergoes a hridaya parivartan due to a series of tragic events and suddenly swears to serve justice to all (only if it could happen in real life). Replete with punches, high on ear-splitting music and muscle flex, the film turned out to be a problematic narrative to watch on the big screen, with an actor like Ranveer Singh agreeing to shoulder it. While I am not denying the star value and box office collections it pulled off, what I hope is for a plot line that doesn’t use a woman’s trauma in the name of entertainment. The film’s deeply rooted problem lied in its incomplete homework with a waste of talent like Sara Ali Khan’s who was just limited to being Simmba’s love interest Shagun and a partner for him to dance on ‘Aankh Marey’ (for which I’ll need another hour or so to rant about). In the quest for a happy ending which hardly replicates in the real world, Simmba solved worldly issues with utmost ease and peddled till the end. What also seemed grossly loose-ended was its usage of subjects like ‘stalking’ and ‘rape’ to project a version of feminism, that the character writing itself could not justify. I mean, it’s 2022 and we are starving to watch more stories that allow us to say “Mind ij blowing” (did you get that Simmba reference here). Moreover, I definitely have no absolute trouble with Rohit Shetty’s vision of filmmaking but it looked great only till Golmaal (which is one of my favourite films) and its ailing sequels. But all things said and done, we live in hope and can only wish for the second instalment of Simmba to stitch its flaws and allow the female characters to take the lead, apart from the usual poster glimmer.

ALSO READ: Here’s Why Sara Ali Khan Chose To Do Simmba Despite Having A Small Role In The Cop-Comedy Film

This Twitter Thread Shows How Ranveer Singh’s Outfits Could Be Inspired By Indian Birds And Honestly, We Believe It