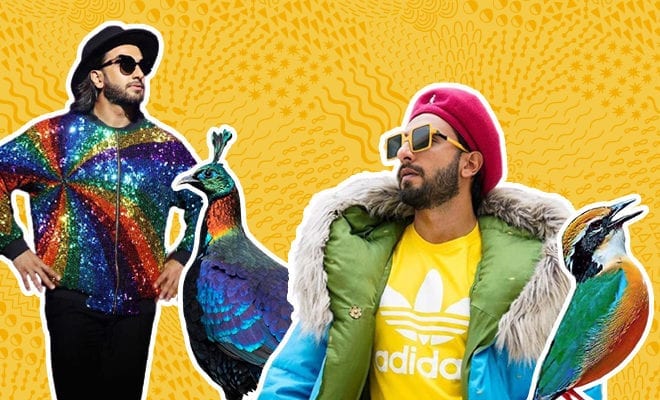 This Twitter Thread Shows How Ranveer Singh’s Outfits Could Be Inspired By Indian Birds And Honestly, We Believe It

You might not have noticed but birds, inarguably nature’s most beautiful creatures, have influenced global fashion multiple times. Feathers, flamingo prints and colour combinations of exotic avians have always made an appearance on the ramps and inspired designer wear and street style. And not just the designers, a lot of fashion lovers take inspiration from little birdies in their backyard for their outfits. Ranveer Singh also might be one of them, or so this twitter thread demonstrates, that compared his outfits over the years with birds that match his style. A bird enthusiast and photographer Bhrigu KP compiled six photos of Ranveer’s colourful outfits with different Indian birds on Twitter and is getting thousands of likes for his creativity and eye for detail. And, honestly, we are blown away too.

Bhrigu must have noticed the uncanny resemblance between his feathery friends and Ranveer Singh’s fashion while bird watching one day which prompted him to dig through the actor’s style file and make this hilarious thread. He reimagined Singh as 6 different birds and the comparison is so on point. He wrote in the caption, “Ranveer Singh as Indian Birds. I like this guy, hence the effort,” adding that the images of birds used were not clicked by him. The six birds are Himalayan monal, Indian pitta, maroon oriole, common starling, black hooded oriole and Indian vulture.

Also Read: Priyanka Chopra Is Being Accused Of Selective Activism And So Twitter Made A Thread Comparing Her Outfits To Trashcans

Ranveer Singh as Indian Birds 😉😉😉🙈
.
.
I like this guy, hence the effort.
(Images are not mine)

This Twitter thread is so on point and every outfit looks looks like it has been in fact influenced by the colour patterns and combinations of these birds. Apart from the colours, the prints, appeal and minor details on the birds are matching his looks. For example, the iridescent and lustrous appeal Himalayan monal matches the sequined sweatshirt of similar colours. The dotted pattern on common starling is mirrored in polka dots on Ranveer’s black and white outfit. Our favourite among all is the Indian vulture though which is compared to Singh’s outfit as  Sultan Alauddin Khilji in the movie Padmaavat. The colour scheme of the jacket and the fur on the lapels–it almost seems like the stylist drew inspiration from the bird for the vulturous character. I mean, the deadly, preying stare is same as well. It’s uncanny!

Only Ranveer’s cutting-edge fashion could really fit the quirky and colourful appearance of Indian birds. The man is all about experimental style and barely opts for classics and basic menswear. We have seen him wearing various colours and textures all at once and the weird thing is he even manages to pull it off every time. Plus, he rocks adrogynous fashion like no other. In other words, he is one of the few stars in the industry who have the spine to rock a skirt as effortlessly as a pair of cargo pants. We have seen ample of eccentric outfits till now, but never thought they could resemble Indian birds so perfectly. Well, now we know!

What’s next? Ranveer Singh’s outfits as Indian food items? Or Calling all the food enthusiast on Twitter!

Also Read: #Trending: Star Kids Are Being Compared To Commodes In This Twitter Thread. It’s Funny But Also Rude