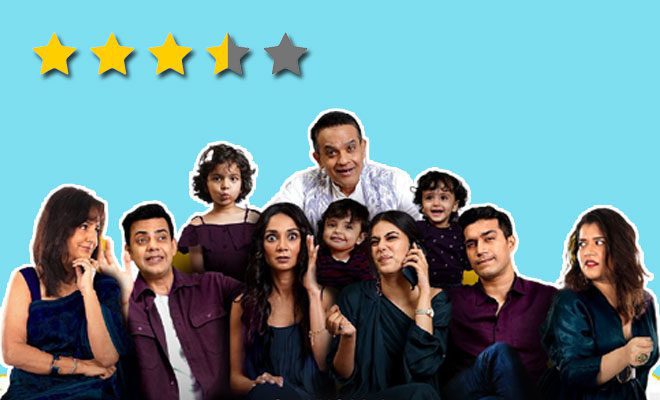 How is a family like a potluck? It sounds like the beginning of a joke, but the fact is, they’re both rather similar. Just like a potluck is about everyone bringing something from their own home to the dinner table, a family is also about each member bringing a different set of character quirks, sometimes even baggage, to the table, and putting it all together to form a hodge-podge but memorable meal. Putting this metaphor to perfect use is Potluck, a new family comedy drama on SonyLIV starring Jatin Sial, Kitu Gidwani, Shikha Talsania, Cyrus Sahukar, Ira Dubey, Harman Singha, Saloni Khanna and Siddhant Karnick. It is brought to us by producers Kunal Das Gupta, Pavneet Gakhal and Gaurav Lulla, written by Ashwin Lakshmi Narayan, Bharat Misra and Gaurav Lulla, and directed by Rajshree Ojha, who previously directed the Sonam Kapoor starrer Aisha.

Potluck is centered around the urban, upper-middle class Shastri family, and the show’s titular ‘potluck’ is an idea that is suggested as a weekly family bonding exercise in the aftermath of the Shastri patriarch’s minor health scare. Govind (Jatin Sial) and his wife Pramila Shastri (Kitu Gidwani) have three children. Two sons—Vikrant (Cyrus Sahukar), who is married to Akansha (Ira Dubey), and together they’ve a five-year-old daughter (Aradhya Ajana) and a pair of twins (Aarav and Aarvi Rana); and Dhruv (Harman Singha), who is married to Nidhi (Saloni Khanna). They also have a daughter, Prerna (Shikha Talsania), who is a writer and has recently moved back in with her retired father and overbearing mother.

A family thus split in three homes agrees to come together every Sunday for a family potluck at one of their homes, on a rotational basis. Initially, it is just Govind who loves the idea as a retired father trying to keep his family around him as much as he can, while his kids just play along for his sake. However, over the course of the season’s eight episodes, the rest of the Shastris realise just how fond of this ritual they’ve grown, without even realising it. And just when they do realise it, something threatens to spoil the taste.

I watched Potluck with my mother, and who better to do it with, right? And I can safely say, it is pretty much like comfort food for your fam. The show has a very light-hearted tone, with regular banter that is bound to be relatable with your own relationships with siblings, or in-laws, or parents. The modern family dynamic is aspirational—here, the daughter can go wine shopping with her father and call out her mother’s sexist behaviour. The two daughters-in-law actually are friends and if there’s any rivalry, it’s only of the sibling kind, between the two brothers, but even that is born out of love and care. As for the overbearing mother-in-law, yep, we have one here too. But like very few shows have managed (such as Sarabhai vs Sarabhai), Potluck too manages to give us a saas who isn’t bad, or vampish or mean, but simply a certain personality type.

What I also loved is the subtle, and not too prominent flipping of gender roles here. For example, Vikrant is practically a homemaker in the show, looking after the three kids while his wife, Akansha, tries to strike a balance between work and family. Nidhi is probably the one with a more demanding job, and that’s not made such a big deal out of. Even Prerna is  In fact, I think the women of the Shastri family are prime examples of the modern woman of today—stumbling, and not always sure, but figuring out her way, whether it is motherhood, work, relationships or anything else.

Yes, it does feel all a little too easy, sanitised, and very privileged. A family dynamic that is so sorted, and open and free, where life’s issues can be taken care of over a fancy meal with wine. Not an idea that is palatable to the harsher reality of our lives, but I suppose that’s where the aspirational bit comes in.

Although, what you also get is a statement against this rigid belief that makes older generations think that nuclear families are not close-knit and are giving up on the essence of family. No, your children can live away, have their own families and still be a part of yours, and the love does not diminish. If anything, giving everyone their space and freedom might actually reduce friction, and bring you closer. I do think that it’s like the much needed upgrade to your Barjatya families of yore, but instead of melodrama and theatrics that try to indoctrinate you with the idea of staying together, you get witty repartee and rolling eyes if someone tries to overreact to situations. That was a Rajshri production family then. And this is a Rajshree-directed family now.

Speaking of direction, I like that each episode is a tight set that revolves around one potluck Sunday, and the fillers are kept to the minimum. There’s thankfully no cramming of too many additional characters, or subplots. The dialogues feel organic, and the emotional moments come through beautifully without being too sappy. The writing is witty alright, but just perfectly that you can actually try this at home! If your family is chilled out too, and knows to take a joke, a lot of laughs are guaranteed because you’re going to relate to so many things.

I personally related to Prerna Shastri’s character the most, as a 30-year-old single woman, who is a writer and who lives with her parents while trying to juggle the dating app scene and having lost patience with the crop out there. I thought Shikha Talsania played the character really well, and her chemistry with Siddhant Karnick (who has been a screen crush from the TV days!) is pretty good. I do hope to see more of her relationship issues, particularly ones that arise from living with your parents and having no privacy at all! And of course, the finances bit.

Speaking of chemistry, there was a mini Aisha reunion happening on Potluck, with director Rajshree Ojha once again directing the hilarious Cyrus Sahukar and Ira Dubey playing a couple again, but this time with little kids around. I thought all the couples on this show were rather cute, but special soft spot for Cyrus and Ira as Vikrant and Akansha, particularly after their house-moving episode. In my interview with her, Ira Dubey iterated how well this show was cast and I agree! Particularly the women, and particularly Kitu Gidwani! I think the fancy dress episode was a total favourite, and I’d declare Saloni Khanna a winner and give her a trophy for that one!

A huge shoutout to the stylist for dressing the Shastris so well. I particularly loved Shikha Talsania’s outfits (spotted a few Masaba’s)! I do have on tiny blob of a complaint about how the homes were dressed up, because for the most part, they looked a tad too similar to each other. I’d love if each family’s home had some distinct quality and its own taste and colour palette.

Remember when primetime television was actually good, and TV families were not all saas bahu and saazish? Potluck is a modern upgrade to those simple, easy-breezy times. It is a fun, light-hearted family dramedy with its moments that make you laugh, smile, point to the screen, then point to a family member and relate hard as you tell them how they do the same thing, and make you thoda thoda emotional also.

I think these days, barring the dramatic tv shows, OTT has very few offerings that you can actually sit with your entire family and watch, without worrying about foul language or NSFW moments that turn into awkward silences. Potluck is a decent alternate that you can actually enjoy as a sweet-and-salty dessert post that family dinner.

Potluck is currently streaming on SonyLIV.

‘Happy Birthday Mummyji’, A Short Starring And Directed By Shefali Shah, Perfectly Captures The Bliss Of Solitude And Self-Care