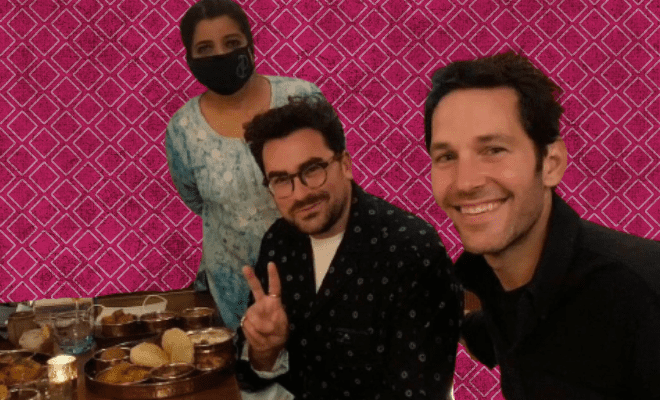 We love it when Bollywood celebrities do normal people stuff, because it fosters this sense of proximity and kinship with them, which is something we probably already feel with the fictional characters they might play on screen. And thanks to social media, we get to see a lot of that these days. The emotion is even more overwhelming perhaps when International celebrities that we admire, and who tend to feel far or worlds apart, do something that isn’t appropriation but genuine love for your culture. Like when you know Tom Hiddleston has family in Bengaluru and knows what ‘Akka’ means. Or when you find out Daniel Craig wanted to work with Aamir Khan in Rang De Basanti, or that Daniel Radcliffe once stood in line to get Sachin Tendulkar’s autograph. Or when you find out that not only were Dan Levy of Schitt’s Creek and Paul Rudd aka Ant-Man from MCU hanging out together, but they also gorged on Indian thali!

Indeed, my dudes, this be true.

Asma Khan, who has previously been on Netflix’s Chef’s Table (Season 6), has a restaurant in London called Darjeeling Express. And on Sunday, she tweeted a picture of herself standing next to two fine gentlemen who looked familiar. He Who Never Ages, Paul Rudd aka Ant-Man from the Marvel Cinematic Universe (or Crap Bag from Friends, or Josh from Clueless, depending on which fandom you belong to), was relishing an Indian thali! What’s more, this was the second time he was dining at Asma Khan’s restaurant. And this time, he brought along a friend who was none other than Dan Levy, creator and star of the Emmy award-winning sitcom Schitt’s Creek!

When Paul Rudd returns to your restaurant and brings Dan Levy with him!!! pic.twitter.com/pkRtnF9pDt

The thali is a selection of indian food in small bowls served together on a special tray. They wanted to try everything in the menu so ordered all the combinations on my menu!

Asma Khan tweeted the picture—which gives us a generous glimpse into the thali that included pooris, some mutton gravy, rice and Indian mithaai‚—and even shared a selfie of her and Levy on her Instagram, promising to serve him biryani on his next visit.

Awww David! Look at Dan, looking all comfy and chill in his robe! And Paul Rudd, the man who came back for the curry, he looks not a day over 29.

Twitter was gushing over the picture, and it took no time to get into the Schitt’s Creek and ‘dining with an Avenger’ references. And of course, the inevitable as ever topic of Paul Rudd not aging at all/ageing like fine wine.

I want a 7-part miniseries about Paul Rudd and Dan Levy going out for dinner https://t.co/UTFad2q4Qx

It’s so interesting to see which famous people are friends with each other https://t.co/QgvZ4ozt3a

(This, above, is literally me!)

Feeling very confident about the next time I’m asked “What two people, living or dead, would you like to have dinner with?” https://t.co/swhCfV6ug6

i am emotional looking at their thalis https://t.co/rRp6xK0Bn3

I mean seriously, look at the guy! Is Indian food the secret to your glowing skin, Paul? Tell us!

I’m telling you this guy hangs out in the quantum realm… he’s 52 years old… what in the heck 😂 https://t.co/5PMMluTZTP

Also Read: Schitt’s Creek Star Dan Levy Calls Out Indian Channel For Censoring A Kiss Between Two Men. It Dilutes The Whole Point Of The Show!

I also love how so many people started talking about the Indian food on their thali!

It’s always great to see Paul Rudd appreciation posts. But we’re seriously not going to have a discourse about how delicious that food looks?! pic.twitter.com/2sTqjdQBNp

It looks like Paul Rudd ran into Dan Levy's house and was like "HURRY UP DAN, LET'S GO GET INDIAN".

Everyone in the replies talking about Paul Rudd, while I'm sitting here staring at the food like… pic.twitter.com/maFlXKu6ba

so curious about the order! Everything in front of them looks amazing. I'll have the Paul Rudd platter thanks

Khan has had a few other celebs too drop in to enjoy her food. If you scroll through her Instagram, you’ll see she posted a throwback from 2 years ago, featuring another Friends alum and a David IRL, David Schwimmer!

Even though looking at this picture makes me stomach rumble and my mouth drool, my heart is so full knowing that Dan Levy and Paul Rudd enjoy eating desi khaana!