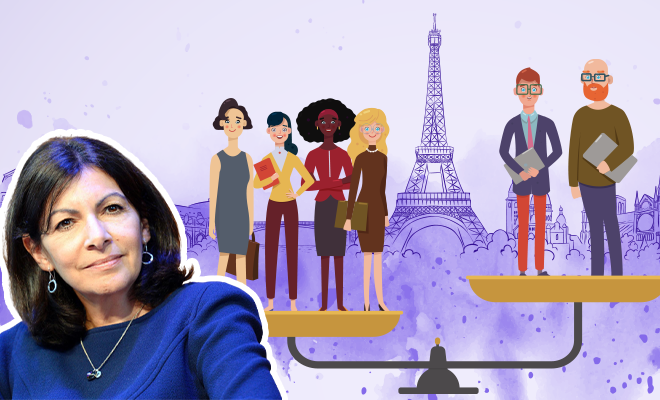 Paris City Hall Fined €90K For Hiring Too Many Women In Top Positions. But Don’t We Do That With Men All The Time?

You know how they say excess of anything is bad? Now imagine you institute a law to ensure gender equality persists in your establishment. Your peeps are like, “Yeah sure, we’re going to equalise the hell out of this!” And their enthusiasm is so intense that they end up unintentionally overdoing it. What do you do then? Do you applaud them for a exceeding expectations and a job well done? Or do you penalise them because they’ve gone ahead and messed up the equilibrium again by tipping the scales on the other side now? Well, I’ll tell you what the Civil Service Ministry is doing to Paris City Hall for hiring one too many women in top positions. It’s fining them 90,000 euros for breaking gender equality laws.

Paris city authorities have been fined for employing too many women in senior positions, a decision mocked as "absurd" by mayor Anne Hidalgo https://t.co/wMXR3ahAyp

Paris city hall seems to have committed this ‘punishable offence’ in 2018, when it appointed 11 women and five men to top positions in the city hall. According to this division, men would comprise only 30% of the total appointments. Now if you’re a woman, you’d wonder, okay, so? Big deal! We’ve seen hat happen to women all the time!

But turns out, this is apparently a case of ‘reverse sexism’. Oh yes, and also illegal technically. Because as of 2013, there exists a law that requires a minimum of 40% appointments for each gender. The law was essentially intended to ensure that women had access to senior-level Jons in the Paris civil services.

About the above law, mayor of Paris, Anne Hidalgo said, “Yes, we need to promote women with determination and vigour because everywhere, France is still lagging behind (on that issue). Currently, in Paris city hall, 47% of the senior appointments are women.

Hidalgo is naturally not fine with this fine. On Tuesday, during a city council meeting, she called it “unfair” and “absurd”. And she’s not alone.

So proud of the women at Paris City Hall for paying the fine for employing more women than men in senior management roles. Paying the pink tax twice sucks but so proud that you are willing to pay it in order to give jobs to the most qualified people.

Looking forward to this day in our neck of the woods! #womenpower https://t.co/Cy7u9SewGW

Ever since I read this news, I’ve been laughing. Laughing because we’ve barely even scratched the service with gender parity globally, and we’re already here, being afraid of reverse sexism. What’s funny is that what Paris city hall has been accused of, the reverse of that has been happening in every single field for centuries now. The ratio of male employment to female employment continues to remain skewered in most spheres. And the one time, the one time that the ratio is skewered in the favour of women, it results in an uproar and a fine? Seriously? Are you shitting me?

Really? If it’s 1 man and 15 women then I would understand the fine. But it’s 11 women and 5 men. So when men was in power they had blanket immunity but when some women are in power they get fined. Wtf kind of distorted world do you French live in?

What’s more, I’m assuming that these women were hired based on their qualifications and not gender. Maybe Paris city hall took a cue fro recent evidence that suggest women make for better leaders in this new world of ours. If it wanted to stick it to gender equality, it would’ve hired the required 40% women and be done with it. But the fact that eleven women were hired tells me, maybe more women were found qualified. We’ve never questioned this for men, and readily allowed them to be appointed, sometimes at a 100%, to positions of power. A 90, 000 euro fine is clearly an overkill, and could discourage others from appointing more women to top positions even when they are deserving.

How much can I put down on a bet this fining shit will become widespread when more women are better qualified than men for the positions hired around the world! Rock on Paris!! Paris city hall fined for putting too many women in senior roles-The Guardian https://t.co/SRPUUNnBkB

I get the spirit of the law that was established to ensure gender parity. And sure, if Paris city hall needed reminding of the rule, the fine could’ve been minimal. This is just absurd and totally ridiculous because it (perhaps unintentionally) sanctions the baseless fears that men have about the feminist movement trying to superimpose women in gender politics. Of course, the fear itself is rather BS, but when you fine government authorities for choosing women based on qualifications as opposed to gender, you’re setting telling men that their so called arguments against feminism are valid. And that’s no laughing matter.