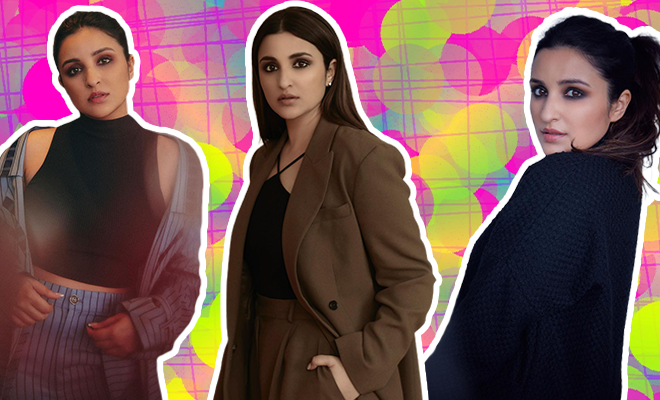 The Subtle Detail You Probably Missed In Parineeti Chopra’s Promotional Looks For The Girl On The Train. It’s Dark And Messy, Just Like The Plot!

If we love anything more than promotional looks galore served by an actor, it is themed promotional looks which demonstrate the key elements of the movie. Plus, this is so much more interesting and imaginative than the basic looks. Sonam Kapoor wearing only red while promoting The Zoya Factor and Ananya Panday dressing up in yellows and blacks for her movie, Kaali Peeli are just a few such instances where the actors let their fashion speak for themselves and their characters. Not to brag but we have gotten pretty good at catching these hidden details by now. So when Parineeti Chopra’s promotional looks for The Girl On The Train featured this one common detail, we took notice in no time. Rather than outfits, she wielded her makeup to communicate the film’s dark and messy story. Before we dive into what that sneaky little detail is, take a cue from the movie poster. Can you guess?

There’s one very subtle, almost hidden, detail behind Parineeti’s makeup looks that she is sporting for the promotions of her movie. It’s the smokey eye look, that’s just as dark, dramatic and messy as the plot of The Girl On The Train. Since Chopra shared the first glimpse of the movie, her character Mira Kapoor has appeared in mostly dark clothing, unkempt wavy hair and black rimmed eyes, that often looked smudged in most of the movie posters. For her promotional looks too, she channeled the protagonist’s look with the smudged smokey makeup, although she did keep the look versatile, experimental and chic rather than sticking to just the classic black. She used deep and dark colours and a messy eye makeup to emphasize the deep mess her character is and lands in during the course of the movie. Also, she is seen crying multiple times which explains the smudged eye makeup. Relax, no spoilers, promise!

Here are some gorge smokey eye makeup looks that she has dropped while promoting her movie till now.

Also Read:  5 Thoughts I Had About Parineeti Chopra’s The Girl On The Train Trailer. Can It Intrigue Those Riding The Train A Second Time?

The first promotional look she dropped was this all-black outfit and a soft black smokey eye. With her turtleneck sweater and leather pants, she opted for a kohled eye look, smudged to perfection, and finished it with oodles of mascara.

One of the most vibrant and lively eye makeup looks Chopra has rocked in a while is this teal blue smokey eye that she teamed her oversized blue sweater and pleated skirt. Your smokey eyes shouldn’t be restricted to blacks and browns and this refreshing coloured smokey eye is proof.

With her chic blue pantsuit, Chopra went for a colour-contrasting eye makeup. She wore this cool burgundy hue on her lids and defined her eyes with a black kajal pencil to amp up the drama. She tied the look with a nude lip. Smokin’ hot!

A brown smokey eye has officially a bigger fan following than the mod black smokey eye and The Girl On The Train seems to be a fan too. She wore a brown suit with a black crop top and teamed the look with a deep brown smokey eye and lined her peepers stark black, perfectly matching her eye makeup with her outfit. We love!

Also Read: Ananya Panday Sported Three Looks For The Promotions Of Khaali Peeli And They Were All So Unflattering On Her