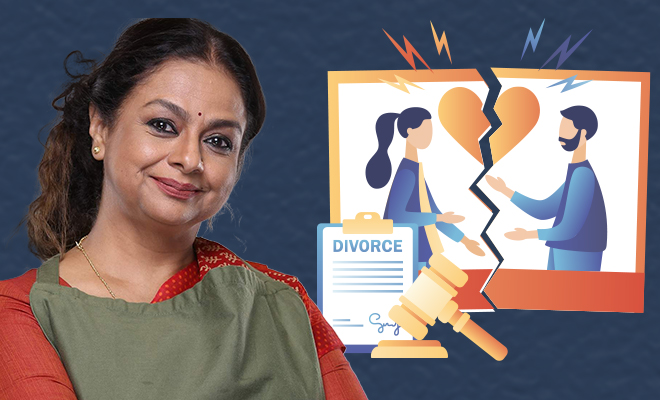 Bollywood has its fair share of complicated family trees and relationships that were volatile and ended in divorce. To us, these are just gossip and something to dismiss is “Ye filmstar logon ka toh chalta rehta hai.” But the truth is, their lives probably have the same issues as ours, only they are magnified under the scrutiny of media and flashing cameras. For them as well, breakups, divorces, heartbreaks can be just as painful and shocking as it can be for any other person. When actor Neeliza Azeem talks about what she went through post her divorce with actor Pankaj Kapur, it is not hard to imagine how devastating that must’ve been.

Most of you are aware, but those who aren’t, Neelima Azeem and Pankaj Kapur were married in 1979, and actor Shahid Kapoor is their son. The couple go divorced in 1984, post which Pankaj Kapur married Supriya Pathak Kapur and had daughter Sanah Kapur and son Ruhaan Kapur. Neelima, on the other hand, married twice after. She married Rajesh Khattar in 1990, with whom she has son Ishaan Khatter. After separating with him in 2001, she married Raza Ali Khan, which ended in 2009.

Recently, Neelima Azeem, who is also a trained classical dancer, spoke about what she went after her divorce from Pankaj Kapur. She told Bollywood Bubble how that was the first time in her life she experienced negative emotions like anxiety, grief, loss, and rejection. She also wasn’t too comfortable about returning to her parents’ home and raising her son, Shahid Kapoor, there since she wanted to be an independent woman.

“It was the first time when I actually experienced grief, sorrow, rejection, anxiety, pain and fear of the unknown. And a whole lot of insecurity. And also a sense of feeling claustrophobic that I have to stay with my parents now and raise the child on my own and how I am going to be moving towards being the independent girl that I always wanted to be and in many ways was.”

Also Read: Kabir Bedi Reveals How Parveen Babi Filled The Void Left By His Open Marriage To Protima Gupta. It All Sounds So Messy!

She further talked about how the ‘rejection’ that she felt post her divorce really hit her bad, because she had had a very happy existence until then and was loved by everyone.

“I was in my own opinion God’s favourite child. Because I got everything so beautifully, at the age of 15 I debuted as a Kathak exponent and there was no looking back. Then I became the highest in demand dancer and everything was so wonderful. Then I had this wonderful friend who I got married to. Everything was just beautiful. My parents were wonderful. I had a great crowd around me. Toh mujhe yeh pata hi nahi tha ki zindagi mein aisa bhi hota hai jismein paun fisal jaye aur aap gir jaayein. Aur rejection ka toh koi sawaal hi nahi hai because everybody used to love me and follow me around.”

As someone who has lived a sheltered and privileged life for most of my existence, I guess I understand what Neelima Azeem means. It is difficult to have your first rejection be something that is such a huge blow to you, your mental health and self-esteem. In fact, divorce is something that is given such negative connotations by our society that even when women choose to walk out or failed marriages, there’s always a sense of dread, because they have to worry about what society will say or think about them. This is why unconditional support systems, especially from parents, goes a long way into making women feel confident that they can get through it.