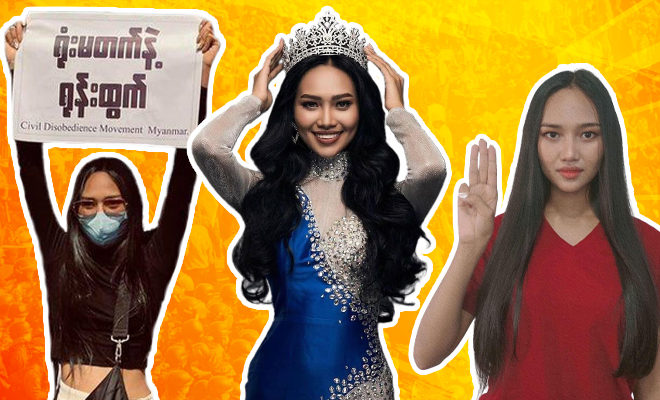 Beauty pageants and beauty queens are rarely taken seriously. It doesn’t matter if many have gone on to do humanitarian work, or are academic scholars. You’d probably have to become as huge an icon as Priyanka Chopra Jonas for the people to forget that you’re much more than a Miss… something. What’s worse is that the lack of faith in these women begins early on, from the moment they get asked these rehearsed questions on stage and have nothing impactful to say. But Han Lay, Miss Grand Myanmar, had a lot to say about the country’s alleged military atrocities and its protesting citizens. And rest assured, people have been listening.

Last week, the 22-year-old beauty queen used the platform of the Miss Grand International 2020 event in Thailand to speak out about the coup that has happened in her country, Myanmar, over the last two months.

On February 1, the Myanmar national military, Tatmadaw, led by commander-in-chief Min Aung Hlaing, overthrew elected leader Aung San Suu Kyi and her National League for Democracy (NLD) party government, and declared a year-long state of emergency after seizing control. The military was backing the opposition party, which demanded a recount of votes after Suu Kyi’s party had a landslide victory in the general elections.

However, the election commission did not find any evidence of malfeasance. And when the parliament session was about to open, the military staged its coup. Aung San Suu Kyi is currently being detained at an unknown location, and several other leaders of her party are in hiding.

Since then, mass protests have been going on in the country, with the military imposing curfews and restrictions on the people, and even detaining journalists, to curb the protests. On March 27, more than 100 citizens, including women and children, were killed.

The Myanmar junta is targeting celebrities who support the pro-democracy protests, publishing "wanted lists" that include actors, actresses, musicians and social media influencers. They are charged with “spreading news to affect state stability.” https://t.co/3uGBbVc8pq pic.twitter.com/WnKHNAtRZb

Who is Han Lay and what was her speech about?

Han Lay’s speech came on the very day this massacre happened, where 140 Myanmar citizens lost their lives in protest. According to a profile and interview of her conducted by BBC, Han Lay is a 22-year-old psychology student at the University of Yangon in Myanmar. She is the Miss Grand Myanmar, and therefore, rightly choosing to represent her country’s dire situation on an international stage. In fact, about a month or so before the event, she herself was at a protest on the streets of Yangon.

In an impassioned speech where she was fighting back tears, Lay pleaded for “urgent international help” for the people of her motherland, who she has said “will never give up”.

Of course, her speech means that she cannot return to Myanmar anytime soon, considering the junta there has already arrested celebrities and social media influencers who have been supporting the protests. Han Lay told news agencies that she plans to remain in Thailand for the next three months because she’s possibly on the military’s radar now. While she has not received any official communication from her country, she continues to receive death threats on her social media. She also hasn’t been able to contact to her family which, though safe, is out of reach mostly because internet connectivity has been constantly severed due to the protests.

Terrorist forces check every passer by's phones and motorcycles in 81 st between 23×24 st, Mandalay around 9:30AM. They'll arrest everyone who have photos/videos and tattoos related with strike.
Our Human Rights are violated.#WhatsHappeninglnMyanmar#Apr6Coup pic.twitter.com/cyobsl6RYR

Despite it all, despite the target on her and her family’s back, Han Lay stands firm by her decision to speak up and draw international attention to what is happening in Myanmar.

People from several Yangon townships launched a “Blood Strike” campaign on Tuesday, spraying red paint on public places to symbolise the blood of those who have been killed on streets across the nation by the junta’s troops. #WhatsHappeninglnMyanmar pic.twitter.com/H5dEpRr2Hq

She told BBC, “These are crimes against humanity, that’s why we want the UN to take action urgently. We want our leader back and we want real democracy back.”

Speaking of democracy, having the world’s largest democracy as its neighbour has not helped Myanmar in any way. While the national media continues to report on the atrocities, protests and deaths in Myanmar, the government continues to stay silent and not make a definitive statement of gesture of assistance.

The Internet, including users from her own country, is currently in awe of Han Lay, for she is one of the few beauty pageant contestants who has become popular, not for winning the crown but for the speech she gave.

This is something you don't normally hear during a beauty pageant:

“While I am standing here on this stage, more than 100 people have died."

Brave speech by the 22-year-old Han Lay from #Myanmar at an event in Bangkok.#WhatsHappeninglnMyanmar pic.twitter.com/8YjbRmwoHz

‘Demi Lovato: Dancing With The Devil’ Review: 5 Revelations And A Wake Up Call For How We Treat Young Female Celebs