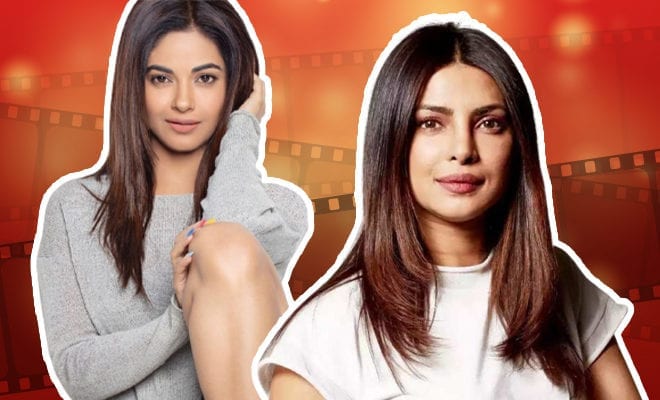 I just wrote about Kangana Ranaut and now I am writing about nepotism. In an unrelated article. Ah, what are the odds? I usually like to being any conversation on the subject by invoking her, she who gave it a voice in the first place. And while initially a lot of people, other than those on the other side of the tracks, supported her, it was eventually a sort of mutual understanding that nepotism and star-kids are going nowhere. But we needn’t worry much because even if they get that jumpstart, they aren’t going all that further without there being talent in their fuel tank. But here is Meera Chopra, cousin to global icon Priyanka Chopra Jonas, who would like you to know that sometimes even that jumpstart isn’t possible.

Meera Chopra is one of Priyanka Chopra’s three cousin sisters who followed her into showbiz. We’re all familiar with Parineeti Chopra, who’s kind of made it in Bollywood. But there’s also Meera and Mannara Chopra who did make their debut in Bollywood. However, their films didn’t make much of a mark, and they found inroads into the South Indian film industry instead.

You’d think being the sister of a former Miss World and now an international star would mean the roles are just falling in your lap. But that isn’t true. Nepotism hasn’t done much favours to Meera Chopra, who was seen in films like 1920: London and Section 375. But is more popular down South. In fact, from the way she talks about it, Meera has avoided even the negative aspects of having a famous sister, such as comparisons with her and the pressure to be as good.

In an interview with Zoom, the Vaana actress said, “The only time when I came to Bollywood there was a buzz that Priyanka’s sister is also coming but honestly I have not faced many comparisons. I have not got any work because of Priyanka. If I needed a producer, they have not cast me as I am her sister.”

Also Read: Prachi Desai Accepts Nepotism As A Reality Even Though It Has Affected Her Career. That’s Quite Mature.

Of course, nepotism isn’t just about landing substantial film roles. One of the many ways in which belonging to film family helps is that it keeps newcomers safe from the darker experiences of he industry, such as the casting couch, or from being taken for granted. And Meera Chopra might not have gotten roles because of Mimi Didi’s name (it’s a nick name for PeeCee, often used by Parineeti), but she sure has been taken a tad more seriously because of it.

“Honestly, being related to her has not helped me in my career but it has really helped me in a way that people did take me seriously. They did not take me for granted as they knew was coming from a family who knew cinema. That is the only privilege I got. Otherwise, I had to struggle. Honestly, with my work like every time my movie used to leave fortunately I have not been compared to both of them,” Meera said.