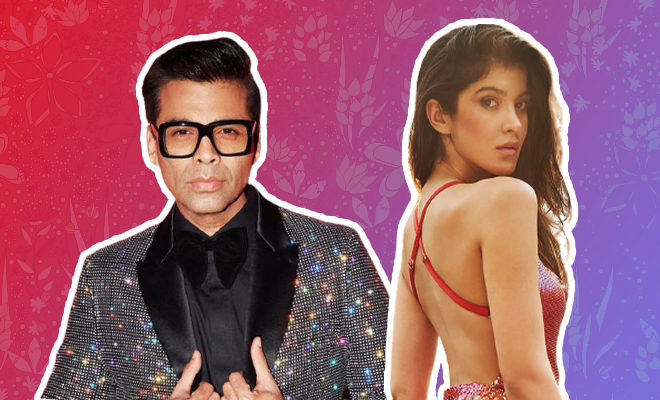 Since Kangana Ranaut usually drags Karan Johar into every other conversation, and it is her birthday today, I’m going to do the reverse and drag her into a conversation about KJo, the star maker. We’ve usually defended KJo (even trolled by Kangana stans for it) every time his name comes up unnecessarily, because well, nepotism is a very real an inevitable part of our society. But that doesn’t mean we won’t call him or the star kids he mentors out when we know that they’re exploiting the privilege a little too much. And choosing a 21-year-old Shanaya Kapoor as one of the ‘actors’ to mentor under the Dharma Cornerstone Agency and having her debut right off in a Dharma Productions film is exactly the kinda thing that’ll earn you some real talk. So listen up.

ICYMI, Karan Johar launched his own talent management agency in partnership with Bunty Sajdeh, called the Dharma Cornerstone Agency. We’re honestly not surprised because, well, he was already the mother hen to all these star babies, and it only made sense that he turn that talent into a legit business. But with great power in the industry comes great responsibility. And umm, honey, we saw Shanaya Kapoor on Fabulous Lives of Bollywood Wives, and if her Hindi is anywhere similar to brother Jahaan Kapoor’s then we’re not sure she should be getting launched this soon, that too in a Dharma film, which is bound to have a huge budget. My money is on Student Of The Year 3.

In fact, if we were to draw parallels, Karan Johar is easily the principal of the school in SOTY, which stands for StarKid of the Year, the competition that will decide which star kid is going to be launched by Dharma next.

DCA (the agency) has been dropping names of other talent that it will be backing, like Sunny Singh of Sonu Ke Titu Ki Sweety fame; Triptii Dimri, who was much appreciated in Netflix’s Bulbbul; Gurfateh Pirzada, who again was praised for Guilty; and Dhairya Karwa of Uri and the upcoming 83. See what I mean? These actors at least have some some acting credits to their name. Watch their intro videos and then watch Shanaya’s. The only thing we know of Shanaya Kapoor is her Le Bal Paris debut as seen in Fabulous Lives Of Bollywood Wives, and reports that she assisted on Gunjan Saxena: The Kargil Girl, which was her cousin Janhvi Kapoor’s film. So umm, that’s probably nepotism too, right?

I know we’ve had enough discussions about nepotism over the years. And Shanaya’s own father, Sanjay Kapoor, is proof that while nepotism can get you through the door, it can’t really get you much further if you don’t have genuine talent. However, I can’t help but think about what what Shanaya Kapoor’s BFF Ananya Panday had said during one of her interviews about her ‘struggle’, to which Siddhant Chaturvedi had said the hard-hitting and quotable line—Jahaan pe humaare sapne poore hote hain, wahan se inka struggle shuru hota hai.

Shanaya and a famous last name

And that rings so true here, doesn’t it? Shanaya has barely anything to her name other than a famous last name. And yet an industry leaders is jumping to give her the first chance, and definitely a second, third, fourth too. Not to mention endorsements and deals that’ll come her way. Remember when Janhvi Kapoor was named the face of Nykaa when she was barely even a film old?

I recall Maheep Kapoor in this one scene from Fabulous Lives of Bollywood Wives, talking about how it is ridiculous to expect them to not use their clout to help their children out. Because isn’t that why parents spent years and years of building reputation, goodwill, and finances? So that their children don’t have to struggle like they did and live an easy life? It’s a common human goal, and I understand that because I too, on occasion, have reaped the benefits of my parents’ goodwill.

But if Shanaya Kapoor, like her friend Ananya Panday, doesn’t display worthy talent and still sweeps Best Debut Awards and a bunch of film deals that, owing to her agency being Dharma, are bound to fall easily in her lap, that’s when we start seeing red. That’s the nepotism we have a problem with.

Janhvi Kapoor When Asked About Nepotism, Said She Recognises The Privilege. Finally Someone Who Acknowledges It