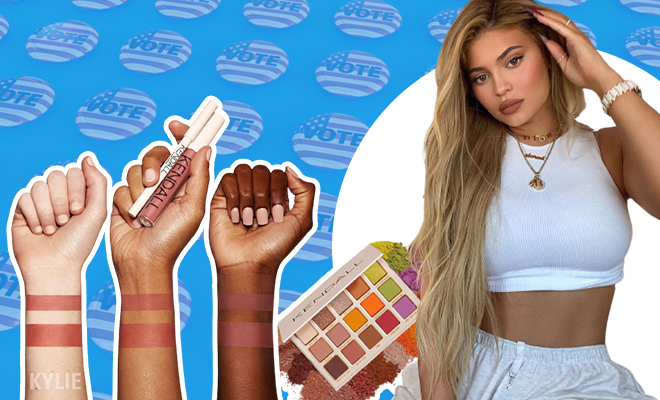 Kylie Jenner Posts A Tone-Deaf Tweet Promoting Her Cosmetic Line Amidst US Presidential Elections. Erm, This Could Have Waited

The Kardashians live in their own sweet world and it’s so cute. Just a few days ago, Kim Kardashian celebrated her humble 40th birthday by flying her family and friends to a private island amid the coronavirus pandemic, completely ignoring the concept of social distancing and mask wearing. The family got called out for not taking the safety precautions seriously. And then there was Kendall’s birthday-cum-Halloween party where again, she was seen blowing candles on her cake among a bunch of people without any face masks in sight. This time, the youngest of the Kardashian-Jenner clan, Kylie Jenner, was under fire for another tone-deaf move—tweeting about her cosmetics line smack in the middle of the US Elections.

Right now, everyone is glued to their screens waiting for the updates on the 46th US presidential elections results to unfold. Suddenly, a celebrity with a huge following (35 million to be precise) drops a tweet promoting her makeup line. See how that looks? We say, bad timing! Kylie Jenner took to twitter to wish her sister Kendall Jenner a happy 25th birthday whilst also reminding her customers that they can’t miss out on the Kendall Collection which was coming back in stock next day on her website. She wrote, “Happy birthday sister the Kendall Collection restocks tomorrow at 9am pst for the LAST TIME including signed PR kits! only on http://KylieCosmetics.com”

Now, in her defence, the products were restocking for the “LAST TIME” and she obviously didn’t want her fans to lose the chance to grab them, but this could have waited. Especially when it is essentially the most important night for the country, don’t you think? People called this move classless and self-absorbed and schooled her on how America has bigger things to think about right now.

happy birthday sister 🖤 the Kendall Collection restocks tomorrow at 9am pst for the LAST TIME including signed PR kits! only on https://t.co/bDaiohhXCV ✨ pic.twitter.com/JGflcsRSh1

Also Read: Self-Made Or Not, Kylie Jenner Certainly Knows How To Enjoy Her Billions. This Is Proof.

Kylie’s tweet was met with less excitement (which she was hoping) and more condemnation. People on Twitter called her out for her ignorant tweet and using such a crucial time as a promotional opportunity. A user wrote, “not her trying to make money while the rest of the country (and quite frankly the world) is in a panic because we’re in the middle of one of the biggest modern day presidential elections.” Another user wrote, “Did you really just tweet about your business???? idk if youre aware but there is an ELECTION tonight.” A user also wrote, “Oh now we’re posting on here lol. There is an election going on girl. You could’ve posted this earlier. People are focused on the election not a restock.”

While Kylie Jenner urged her followers to go shop from her beauty line, a lot of celebrities such as Lizzo, used their platforms to speak about the elections and encourage their fans to vote. Even the rest of the Kardashians including Kim, Kourtney, Kendall and Kris Jenner posted about elections and with their ‘I Voted’ stickers. Apart from that, Selena Gomez had a live chat with American politician, lawyer and voting rights activist Stacy Abrams about the US elections, importance of Latina vote and impact of this election which was very insightful and important. Kylie posted a similar post on Instagram while she could have used the opportunity to also ask her 200 million Insta followers to go and vote.

happy birthday sister 🖤 the Kendall Collection restocks tomorrow at 9am pst for the LAST TIME including signed PR kits! only on KylieCosmetics.com ✨

As the results roll in and Joe Biden and Kamala Harris inch towards a win over POTUS #45 Donald Trump, the world is watching like a hawk and contemplating who the next president of the United States would be. A lot is at stake for America and that’s why this election is the most for the United States. People commented on how they could be losing their voting rights while Kylie Jenner was worried about her makeup restock. Promoting your brand and alerting your customers about makeup restock isn’t wrong, but there is a time and a place, Kylie. Keep up.

Also Read: Kim Kardashian Took A Private Island For Her Birthday. During A Pandemic. Without Bothering With Masks