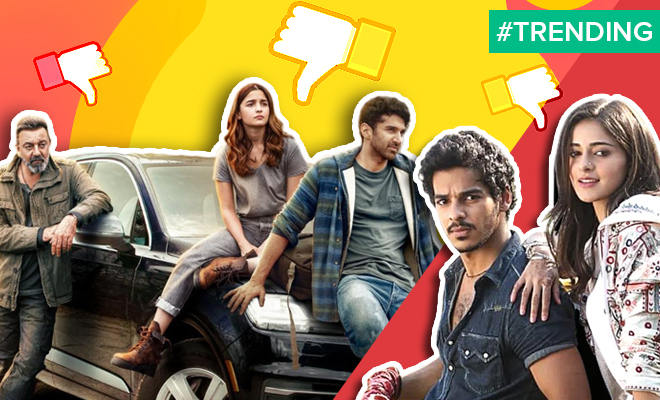 Khaali Peeli Teaser Trailer Gets Plenty Of Dislikes. Are We Really Seeking Justice Or Just Dishing Out Revenge To Feel Powerful?

The internet has always been a weird place, but lately, it’s become a cesspool of negativity and the churning out of absolutely nonsensical content to seek out eyeballs. Anything goes at this point, and if it involves skeletons and lascivious lies, that’s better. And while no one is allowed to go out on the streets and protest the various real or imagined injustices, it doesn’t stop people from becoming keyboard warriors and therefore the fight, happens in the digital world.

There was a lull before the storm – I’m talking about the period after Sushant Singh Rajput’s death- where people hadn’t quite made up their minds about being armchair activists. It didn’t stop them from raging about the nepotism debate and the whole industry was split into two – the ones who were okay with it and the ones who vehemently opposed it. And into this were dragged the names of Alia Bhatt and Karan Johar, apparently the duo who are responsible for this entire situation where the offspring of people are favoured. And then the trailer of Sadak 2 dropped and the wrath of idiots everywhere was unleashed. Everyone took this opportunity to drag it down, making it one of the most disliked trailers. This wasn’t asking for justice, this was vindictive and people were using their clout to further a cause they believed in, and if other people’s mental health was trampled upon because of this, that was just collateral damage.

The trailer garnered a lot of views but that’s not the number people were looking it. It got 12 million dislikes and people hit that dislike button with a vengeance, raking up news stories about the trailer of Sadak 2 and its unfortunate claim to fame.

And while they weren’t categorically targeted given that they haven’t gathered that sort of clout yet, Ishaan Khatter and Anaya Panday’s teaser trailer for Khaali Peeli dropped yesterday and a similar fate awaited it. The number on the dislike button is steadily climbing and when I last checked, it was clocking in at 945,000. When the number of likes are at a mere 88,000, this kind of obvious bringing down of a film’s trailer seems horrible.

Why Is Everyone Lashing Out Against Star Kids And Their Movies?

Largely, this is a byproduct of the misplaced activism. The populace is baying for blood, and they are using Sushant Singh Rajput’s death as a crutch to further their personal agenda. It is not as much a fight for justice for SSR as it is a lashing out against the privilege that star kids are believed to have. Which is why movies that are releasing trailers are facing the kind of backlash normally reserved for political dramas. That being said, digital activism in the form of spreading hatred and bringing down a movie because of the actors in it is a far cry from justice. It certainly isn’t going to undo a death. Or avenge it. Then why are we out to pull down anything that represents what the public has seemingly come to hate?

With the pandemic, most movies are releasing online. At OTT players work to get the best movies in their kitty, driving subscriptions up, we are not sure who is losing out here, except perhaps those who resolutely refuse to get entertained my star kids. And even while this happens, the number of retweets and likes on a certain bhai’s video, or tweet are proof that the tirade is reserved for a few. A few deemed not worthy of the audience’s respect but this is arbitrary.

But Are People Watching Other Movies? Nope.

Most people would proudly puff their chest about not watching a movie with actors with lineage in the industry. They wear it like a badge of honour. But are they really putting their money where their mouth is? Because it’s not like they are watching movies of newcomers. A Raat Akeli Hai starring Nawazuddin Siddiqui comes on Netflix, creates a tiny ripple and then disappears. So, no, the audiences are not watching movies with actors they don’t know. While Dil Bechara was declared a hit, and opened to glowing reviews because you certainly don’t want to claim a movie like this was a bore, because they will come for you. Let’s admit that we do not give actors who are alive their due. Are we watching small budget movies that aren’t trending on Twitter and that don’t garner the kind of eyeballs that a cringe-y show would? As an audience, we need to ask ourselves are need to pull down other people’s hard work and dwell in the triumph of it.

Because right now it’s carnage and for all the wrong reasons.

Swastika Mukherjee Got A Fabulous Haircut. The Internet Decided That The Look Was That Of A Cancer Patient. This Is Extremely Insensitive