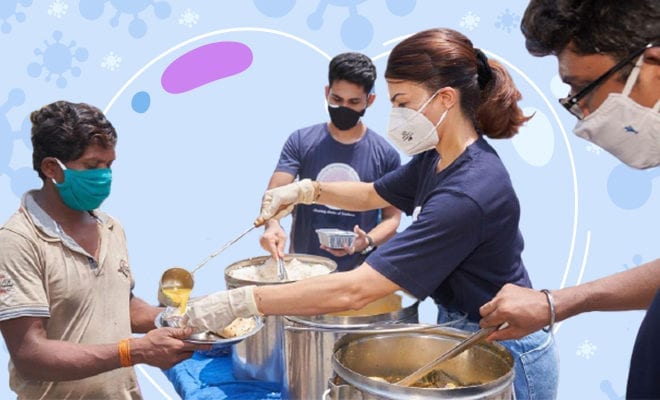 Jacqueline Fernandez Agrees Celebs Are Privileged But Says It Isn’t A Time To Criticise Them. We Disagree, This Is Exactly The Time!

If you hear anyone tell you that COVID-19 pandemic is some great leveller, tell them to respectfully STFU and sit down. If anything, it is making the difference between those with privilege and those without much starker. For example, while politicians sat on their socially distanced stages and campaigned during the elections, getting the best healthcare and easy vaccines, those who participated in these rallies had none of that while they contracted COVID from being in crowded places. Similarly, while people struggled to quarantine in the smallest of spaces and race against time to save their loved ones’ lives, celebrities with their privileged stamped passports flew to the Maldives to get a break from it all. And now, while a few of them have lent a helping hand, they think it is okay to tell us this isn’t the right time to get negative about privilege? Yep, that’s what Jacqueline Fernandez has said.

Recently, Jacqueline, who has started her own You Only Live Once Foundation, was seen helping an NGO called the Roti Foundation with preparation and distribution of meals as part of their COVID relief programme in Mumbai. While talking about this initiative, she acknowledged that she comes from a place of privilege, which grants her a roof over her head and food on her plate, while others are not so lucky and struggling to survive through this pandemic. She said that she wanted to help those people out, above all.

Now that is an admirable sentiment, and one that several celebrities, apart from Jacqueline Fernandez, have shown. I don’t think I need to even mention all that Sonu Sood has done and continue to do for the people of this country, since the first lockdown began. The man has been relentless. Meanwhile, it is kinda silly that movie stars and sports personalities, whose one-time payment for an endorsement or movie is in millions, are asking regular Joes like us to donate for COVID relief. While others have chilled, gone and done that Maldives trip, rubbed our noses in their beach vacay stories, and then directed efforts to fundraise.

Honestly, good for you guys. But then when people call out celebrities over their privilege, they shouldn’t come around trying to dismiss it in the name of ‘this is not the time for it’ or ‘this is just negativity that we don’t need right now’. And that’s exactly what Jacqueline Fernandez tried to do.

“If it’s in your capacity to help, please help, and if maybe, it’s not in your capacity or you don’t have the means, at least don’t spread hate, don’t spread negativity. It’s not the time or the place for that. It’s really uncalled for… There are actually people out there who are doing what they can and probably not talking about it. You don’t know what someone’s going through or what someone’s doing, so please don’t make yourself a judge of that. Even if it means keeping your negative opinions to yourself, please do that.”

While we do understand the sentiment behind it all, this is pretty much like the logic that men use to tell women to not ‘generalise’ about all men being trash because there are good men too who respect women. The point is, right now is the time to call out the inaction and utter lack of social responsibility that many celebs continue to show right now. As public personalities, some amount of tact is required, isn’t it? For example, sure, you want to go for a vacation because your privilege can afford it. Or you’ve gone and done a hot photoshoot because you still have work and all the top notch safety precautions are being maintained for you. But then why advertise it like you want the whole world to know about it? Couldn’t it have been done quietly too?

Furthermore, since when is speaking the truth and laying out cold hard facts become ‘spreading negativity’? Why do we want to keep living in the illusion of toxic positivity? If not now, then when do we get to remind celebrities and the richest of the rich in our society that they’ve built their empires on the backbones of the regular folk and sharing that wealth in a time of such crisis isn’t just them doing a favour, it is a moral duty of sorts?

Anyway, kudos to all the celebs doing their bit, whether they’ve advertised on social media or not. We won’t put you on a pedestal for it, but we do appreciate what you’re doing. And yes, that talk about privilege, that’s not going anywhere either.