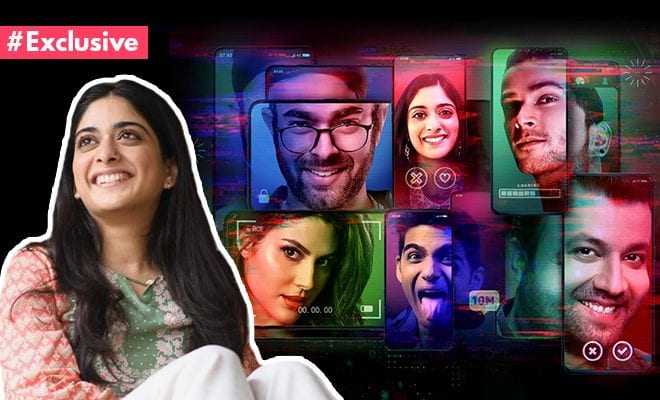 The first time I watched Tanya Maniktala on screen was as Lata, the girl looking for a suitable boy in Mira Nair’s BBC series on Netflix based on Vikram Seth’s A Suitable Boy novel. And there was something about her smile that instantly won me over. It’s been roughly a year since the series first came out (in the UK) and Tanya Maniktala is back, capturing prime real estate on our OTT screens. Just this week, in fact, she has two interesting releases lined up, and coincidentally, both are anthologies: Feels like Ishq on Netflix, which is a romance anthology, and Chutzpah, which is a bunch on stories about humans and internet culture and just how it transforms their identities both online and offline.

From the trailer, Chutzpah looks and feels fresh, quirky and interesting. Basically, it has chutzpah! And the cast is definitely a huge part of that vibe. It stars Fukrey funnymen Varun Sharma and Manjot Singh alongside Gautam Mehra, Tanya Maniktala, Elnaaz Norouzi, and Kshitij Chauhan amongst others. The anthology series is directed by Simarpreet Singh and marks the OTT debut of filmmaker and producer Dinesh Vijan’s Maddock Outside. It has been conceptualised by Amit Babbar, who has also co-written it with Mrighdeep Singh Lamba.

Eager to know more about her character in the series and whether it was harder to shoot virtually or keep a straight face while working with Varun Sharma, and everything that’s coming next for her, I had a fun chat with Tanya Maniktala! Read on!

Q: Can you tell us about your character, Shikha, in Chutzpah?

A: Shikha’s story is about this girl who comes from a very comfortable background. She’s lived a very protected life and holds morals, principles and family in high regard. She is in a relationship with Vikas, played by Varun Sharma, who has to be in Boston for his job, leaving them no option but to do it long-distance. And Shikha being this young, enthusiastic woman, she tries to navigate her way through it and make the relationship work to the best of her capacity.

The character feels special because she reminds me of the optimism that she emits. She could brighten up anybody’s day, and she has so much love and life inside of her that she wants to share with everybody. And in her, you’ll always have a cheerleader. Shikha has so much passion; she’s pure and selfless, and always up for a good time. And no matter how long the relationship may have been there for, she’s always finding something or the other kind of spice it up!

Q: Chutzpah sounds like a blast. And so does working with Varun Sharma! Tell us more about that!

A: Unfortunately, because of COVID, we couldn’t interact much in person; we had all our readings on Zoom. But even virtually, you are right, Varun is such a blast and an incredible actor, and more importantly a very nice human being. He is a grounded human being and so funny at the same time. He would make sure that you’re comfortable and gives you the space to communicate with the character and see what’s working for you and what isn’t. I’m so glad I got to work with him.

We were doing a look test and I told him that actually my father is a big fan of his and is very excited for this project to come through, more than anybody else!

Q: How challenging was the process of filming virtually?

A: Surprisingly, it was very, very simple. We had a great team. I mean Simarpreet sir (director) and Mrighdeep sir (writer) who conceptualized all of this, they’re very passionate people. And this was their baby! And such people, when you’re working with them, they are going to make sure that everything goes around seamlessly. We had a lot of workshops and readings because here, on set, the other person is not going to be there. So, there was not much chance of improvising things. It had to be precise. The timing had to be correct and lines had to be delivered in the perfect manner because other things have already been recorded. And if you react in a way that is unexpected of you, it might just not fit in.

Still, for us actors, it was just our stories. But for the creators, they had to keep all the stories in the anthology in mind. Kudos to them for taking up such a huge ordeal and seeing it through!

Q: Speaking of internet culture, has your experience or perception of the Internet changed with your growing celebrity status?

A: So Tanya avoids digital as much as she can! *laughs*

You know, I had this perception for the longest time that the internet isn’t a kind space. It is not a space where you can trust people. But I think in the wake of COVID, my perception of the digital world has changed. I have had friends who were going through tough times in their lives and strangers from everywhere have been helping them. So I have seen a lot of that happening around me, where the stranger sitting online is probably the kindest to you.

It’s so funny because we have been taught as kids to not talk to strangers, and now strangers are our best friends online!

I don’t know if it’s a lie or people are putting on a façade. But I want to believe in this kindness that is being shown. I mean, trolling and bashing is always going to be a part of this world we live in. But I think it’s time for us to divert from the cons of the internet and seek the pros that it has to offer.

Also Read: A Suitable Boy Review: Mira Nair’s Immersive Adaptation Proves Not Much Has Changed For India Or Its Women

A: It is very overwhelming! To be honest, it’s very surreal to be a part of the BAFTA Breakthrough programme. I’m just so honoured to be alongside the other honourees, it’s such a great, talented and hardworking bunch of people. It’s a matter of pride that I get to be chosen! I don’t know what to expect right now, so I am just taking it slow, one day at a time, and we’ll see where it takes me!

Q: This last year has been great for you, from A Suitable Boy to the another anthology that’s releasing this week too, Feels Like Ishq (Netflix). What do you look for when you’re picking your roles?

A: I don’t look for anything specific, really. I want to read as much as I possibly can, and I want to work on something that excites me, that I truly would want to watch. So you could say the consumer Tanya dictates the actor Tanya!

I would want to explore a lot more, and get into a little more darker shades of Tanya now because it’s something I want to see if it suits me. The idea is to keep growing as an actor, as a human being.

Q: What’s next for Tanya Maniktala?

A: My next project, which could be released sooner, and which I am so thrilled about is Mumbaikar, because I got the chance to work Santosh Sivan sir and the incredibly talented Vikrant Massey, Vijay Sethupathi sir, someone I’ve grown up watching on screen! It’s been an incredible journey and I’m grateful for everything that I got to do. I’m just looking forward to what’s next!

Chutzpah will begin streaming on Sony LIV from July 23, 2021.