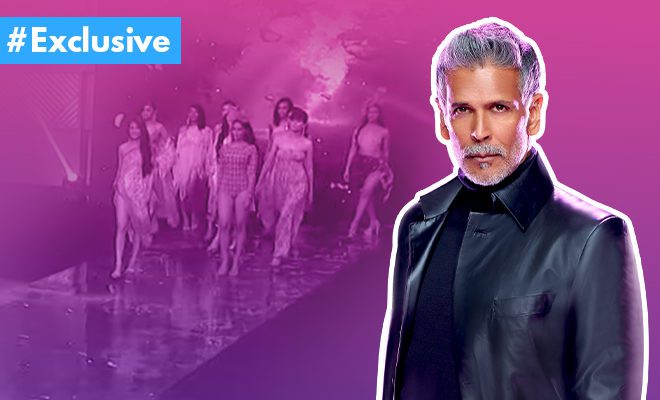 Every time you say supermodel, there are few fixed images that pop up in my head. Naomi Campbell, Kate Moss… Milind Soman and, for a reason that IYKYK, Madhur Bhandarkar’s Fashion, where Priyanka Chopra as Meghana says she doesn’t want to be just a model, but a supermodel. Modelling as a profession isn’t an easy one to pursue. And yet, since we’ve been kids, we’ve all subconsciously dabbled in it. From photoshoots in cute little outfits when we were little, to the fashion show and talent showcases that teach us a thing or two about confidence before a crowd, and occasionally that strut, back and forth, that’s our amateur version of a supermodel’s ramp walk. But it ain’t just that. Being a supermodel takes so much more than the slightly dated notions we have about the modelling and fashion industries. The change is visible when you look at reality shows like Supermodel of The Year on MTV, which is all set to return to our screens with Season 2 after the success of its first outing.

The first season of MTV’s Supermodel of the Year, fondly referred to as SOTY, made it amply clear that to be a supermodel, one had to be bold, fearless, oozing oomph and confidence to be chosen by the panel of judges, which included industry vets like Milind Soman, designer Masaba Gupta and Malaika Arora. And the contestants were mentored to be all of that and more by Ujjwala Raut and Anusha Dandekar. For Supermodel Of The Year Season 2, some familiar faces return to the judges panel—Malaika Arora, Anusha Dandekar and Milind Soman. But this year, the theme kicks things up a notch hire. With a unique theme that focuses on the contestants’ individuality and asks them to be #UnapologeticallyYou in a volatile world of social media that is ready to judge, criticise and troll them for who they are and what they wear.

As someone who has been a plus size person all her life, modelling was always a distant world that would never let someone like me in. Luckily the body positivity movement has been working relentlessly to change that narrative. The modelling industry has come a long way, seen its own new trends while clinging to certain problematic ideals of old. I was curious to see what the new definition, if there was one, was of a ‘supermodel’ and how a show like SOTY 2, that focused enough on ideal physical attributes would reconcile with the changing perception of inclusive beauty and fashion.

And who better to talk about this with than Milind Soman, who’s been in the industry for long enough to bear witness to how far it has come, and how far it can go. In an interesting chat, I spoke to Soman about being a judge on Supermodel Of The Year 2, what the audience can expect from the new season, his views on the body positivity movement, feminism, and what it takes to be a supermodel today.

Q: How was your experience of Supermodel Of The Year Season 1 and what made you return for Season 2?

A: Season 1 was quite a while ago! But it is always exciting to be a part of a show like Supermodel Of The Year. One of the reasons is that over the years, I’ve seen how the modelling industry has changed. When I was a model, the models were initially coming only from Mumbai, and then eventually, some started coming from cities like Delhi and Bangalore.

But today, models are coming from all over the country, from small towns and even villages, and from different backgrounds too. It’s interesting then to see the different attitudes, dreams, beliefs and to hear their stories. More than anything, for me, it’s meeting people from all over the country and listening to what’s on their young minds that is the best thing about this show.

Q: What can the audience expect from this season?

A: The participants! This season is about how these participants, who’ve come from all over India, approach their life and their work, which changes every year with the trends. But also, for the audience, it’s going to be amazing to hear some of these participants’ stories, some of whom have come from remote towns and are probably the first one from their family to ever step out of their town to do something on this scale.

So it’s not just about beautiful faces and bodies, and who’s going to win. It’s aspirational and also inspiring people to get up and go achieve that dream.

Q: As a judge, what are the three topmost things on your list of what makes a supermodel?

A: One thing is, you’ve got to be a good model, which means that you understand what the job requires. Because first and foremost, a model is a professional doing a job. So it is important that you understand the requirement of the job not just in terms of the physical requisites but also mentally and emotionally, as in what it’s going to take from you.

Second, how much self-belief and confidence you have.

And the third thing, is how sure are you of what you want.

So the face, the body, all of that is secondary and often changes depending on whatever is in trend or whether you’re working in the country or abroad. But for me, professionalism is number one and then, being sure of what you want.

Q: With inclusivity and body acceptance movements gaining momentum, how do you reconcile that with a show like SOTY, which focuses on physical attributes and somewhere promotes the idea of ‘a pretty face’?

A: See, I think “pretty face” depends on what we decide is “pretty”. And it isn’t even deciding on an idea of prettiness, it’s only for this show. Again, for me, it’s not about whether you’re a certain body type or height or you have a particular kind of face. When it comes to beauty, the kind of diversity we have in India is incredible, from people in Punjab to Kerala, Rajasthan, Gujarat, the Northeast. They have such distinct features in terms of their skin colour, their hair and it is wonderful to celebrate that.

To me, looking at all that diversity, it finally boils down to what’s in the contestant’s mind. Why are they doing this show? What are their beliefs and values? What is the story they want to tell? That is important. It’s finally about the mind. Whenever people ask me, what makes a model, I say, it’s not about the face. Yes sure, you’ve got to look attractive to certain people. But we don’t know what exactly is the idea that makes a person attractive. Today, there is a model who is internationally known as “The Most Perfect Face Ever”, or so I hear. But I don’t find her attractive at all.

So beauty is subjective. It’s rarely about the looks or the body. It’s when you love looking at the person, you want to follow them and you admire their confidence, that is the most attractive according to me.

It’s quite reassuring to hear Milind Soman say that, being a plus size woman myself! But it makes me wonder…..

Q: Does that mean, some time soon, we might see plus size models on the ramp or even in a show like SOTY?

A: Of course! In fact, we make a point to put this message out on the show that we want people who are normal. Now again, that is a broad range. But we do not want people who starve themselves or be cruel to their bodies to achieve a certain standard. It’s not healthy for the body or the mind and makes you unhappy. And what is the point then? Aren’t we doing all of this to be happy ultimately?

Most people believe that models starve themselves, they’re anorexic or bulimic. But we want to dispel that and tell them “No, Malaika [Arora] is not like that. Anusha [Dandekar] is not like that. Neither have I been like that myself. We don’t believe in it at all.

Q: What does feminism mean to you?

A: Feminism to me, for one, is that you try to be who you believe you are. The conversation has actually gone beyond, because there are more genders. People can say, “I am not a woman or a man, but this is what I am,” and we accept that too. Feminism, for me, is about striving for equality, to have your voice heard, and to be the best you can be with whatever gender you chose to be.

Also Read: Milind Soman Says That When He First Met His Wife, Ankita Konwar, Neither Of Them Wanted To Get Married

Q: You are an advocate for a health and fitness. But there are many fitness enthusiasts who dismiss the body positivity movement because they believe it encourages obesity and unhealthy bodies. What are your views on this?

A: See, personally, I wouldn’t like to be fat, because it would stop me from doing the thing that I love, which is running. But if other people are okay with it, I am nobody to judge that. The choice to be who you are is for everyone, and whatever you choose, it’s their right.

When it comes to health and fitness, people know what is healthy for them and what is not. For example, we know that certain foods, or say smoking is unhealthy. And it’s even put on the cigarette packets how harmful it is. But it is people’s choice and that’s okay.

Q: The modelling industry has changed so much since you were a young entrant yourself. When you look at it now, what change are you most happy about and where do you see scope for improvement?

A: You know, I think overall India has changed so much, and it is slow but it is gradual and it is changing. As far as the modelling industry is concerned, I think the most exciting thing, like I mentioned in the start, is that models are now coming from all over the country. And there is a reflection today, in the participants of a show like Supermodel Of The Year, of what India has to offer to the modelling world.

Milind Soman Said He Discusses Everything With Ankita Konwar Because They’re A Team. We Need A Milind Soman Too.