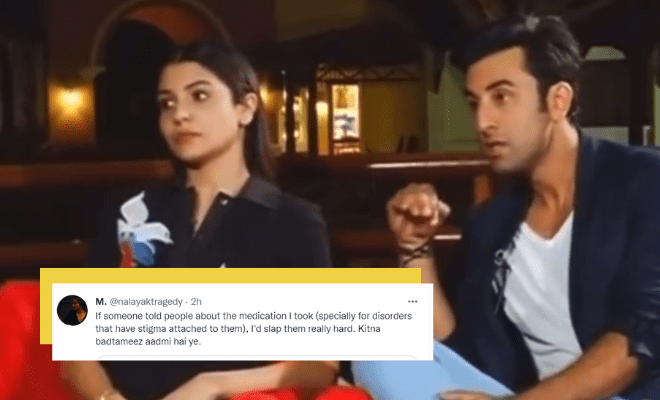 Why Is Twitter So Mad At Ranbir Kapoor For “Mocking” Anushka Sharma’s Anxiety Years Ago?

One thing you might not know about me: I suffer from severe anxiety and that is just one of my mental health issues. Now here is another thing you might not know about me: humour is my coping mechanism. So what do you get when you merge mental health issues with humorous coping mechanisms? A person that jokes about her mental health and trauma as if they don’t haunt her every single day. And I guess because of this, I sometimes tend to not fully understand the outrage behind mental health-related issues. Hence, the Twitter anger over a resurfaced interview clip of Ranbir Kapoor and Anushka Sharma wherein Ranbir seemingly mocked Anushka’s anxiety is a bit lost on me.

Now, let’s make something clear: I am not defending Ranbir here. What he said was undeniably inappropriate and intrusive. But what did he say? In an old interview, Ranbir Kapoor talked about how severe Anushka’s anxiety is and very casually even mentioned that she is taking pills for the same. They went on to discuss what pills she is taking. However, Anushka went on to clap back and say that Ranbir uses drugs to keep himself energetic and upbeat.

The Tweeple are not happy with Ranbir and have shown their anger over his insensitiveness about Anushka’s mental health struggles. Take a look here:

If someone told people about the medication I took (specially for disorders that have stigma attached to them), I'd slap them really hard. Kitna badtameez aadmi hai ye. https://t.co/289CBlDfDo

i just feel bad for alia cause imagine marrying him and then raising a kid w him. https://t.co/nvr4EXeCKR

he’s such a dog… no wonder ppl don’t wanna talk about their mental health when others make such crass jokes on their expense… it’s ok if you don’t have anxiety disorder and you don’t need meds but you could at least have empathy for those who are struggling https://t.co/bUk5ziSCf1

Also Read: This Tweet About Anushka Sharma And Virat Kohli Is The Epitome Of Misogyny And Middle Aged Uncle Humour

What a complete piece of shit omg https://t.co/H6O4X3X8uT

Loved how Anushka responded at the end to the man's terrible behavior. https://t.co/XmF9RNjaZF

I personally don’t see the point of having this outrage now. The video must be at least 6-7 years old now, so I personally don’t understand the anger over statements made so long ago. Considering they still seem to be close (almost BFFs), I think it is safe to assume that they got over the incident. While I completely agree that Ranbir should not have disclosed such personal information about Anushka in public, I don’t think he was joking about her condition either. I personally am of the belief that while people in the public eye should ideally be sensitive to their viewers and try to not “offend” anyone, it is virtually impossible to do so. One of the tweets said that this is why many people suffering from mental health issues don’t talk about it but is it? How many ofour mental health issues have anything to do with what celebrities say or validate? I know mine don’t, I won’t speak for anyone else. I feel like we must try to be more empathetic to the people around us, that is what will encourage people to open up, not something that a celeb says.