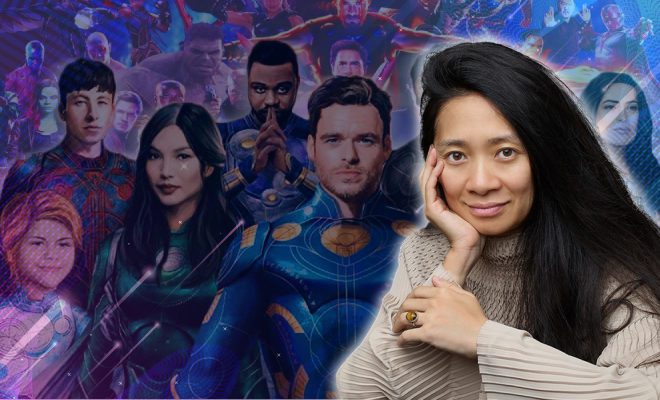 The First Reactions To Marvel’s ‘Eternals’, Directed By Chloé Zhao, Are Here, And It’s Different!

This year, we’re all going back to the movies. With safety precautions, double vaccinations and masks, of course. But we are, and it is an exciting time. This week, as the world gets ready to see Denis Villeneuve’s sci-fi epic Dune in theatres, a bunch of really lucky individuals have already watched another major film even of the year—Marvel’s Eternals! The premiere of the 26th film in the Marvel Cinematic Universe or MCU, directed by Oscar winner Chloé Zhao, was held at the El Capitan Theatre in Los Angeles on Monday night, where the stars and superheroes descended in full force. I mean, Angeline Jolie, who plays the warrior Thena in the movie, had all of her six children walk the red carpet with her! And now that the embargo on social media really eactions has lifted, we can finally know!

✨ It's happening ✨ The world premiere of Marvel Studios' #Eternals starts now! Follow along all night to see who shows up on the blue carpet. pic.twitter.com/t7h5zrIXgB

For us Indians, there’s a double treat, with Kumail Nanjiani’s Kingo playing a Bollywood star and our very own Harish Patel (Ibu Hatela from Gunda, you guys!) also in the movie.

But what makes this film even more special, apart from the obvious reasons, is that this is a major MCU film being helmed by a female director. And while I too am not a huge fan of adding ‘female’ to these job roles because it highlights gender, the fact is that it is a big deal to have a woman of colour lead such a major production of a mammoth film franchise. What’s more, the anticipation is heavy considering Chloé Zhao has her own unique filmmaking style that she’s brought to the Eternals, with everyone hoping to see a different kind of Marvel film than the usual. And definitely one that looks visually spectacular, with some trademark Zhao shots you’ll know if you’ve seen her works, like the Oscar-winning Nomadland!

The one and only Kevin Feige and Chloé Zhao at tonight’s Premiere #Eternals pic.twitter.com/PiItvzzdAW

Zhao is not the only woman headlining this magnum opus though. The Eternals are powerful beings with all sorts of super powers, and they are led by a woman, Ajak, played by Salma Hayek. Their strongest warrior is Thena, played by Angelina Jolie. And there’s also Gemma Chan, another Asian actor, who plays Sersi, a powerful being, whose performance has been much appreciated in the early reactions!

Make way for @gemma_chan! Our Sersi knows how to capture your attention 💫 #Eternals pic.twitter.com/NIrTqevblx

Here’s what the early reactions are saying about Chloé Zhao’s Eternals!

Holy crap – Eternals is a freaking MASTERPIECE!!! Packed with adrenaline right from the start, but also filled with lots of heart & humor! So many MCU firsts!! Your mind will be BLOWN! Nods to comics but a totally unique story. Those end credits are GAME CHANGERS!! #Eternals pic.twitter.com/jKiMJukn4S

Marvel’s #Eternals is spectacularly weird & rich w/ a new MCU mythology that makes it feel separate from everything else. It’s honestly refreshing. There’s a bittersweetness to the film that you feel in its sunset shots – a definite Chloé Zhao touch. It is soulful & thoughtful pic.twitter.com/pIAFAyhJ4D

#Eternals is a whole lot of movie.

It’s shot with a massive scope, looking visually different (and more intimate) than anything else Marvel. It has laughs, great surprises, and heart to go with the gigantic, crowded story it unpacks.

Also Read: Meng’er Zhang Talks About Learning Martial Arts From Scratch For Marvel’s Shang-Chi! This Film And Its Badass Women!

#Eternals flirts with being "just a superhero movie" but (barely) gets by on scale, a few affable actors and some eventual intrugue. At its best, it almost plays like Marvel playing in the DCEU sandbox but coasting on comparatively generic superhero archetypes. pic.twitter.com/Im83hV6sm0

Eternals is Marvel’s version of Zack Snyder’s Justice League. A film that builds upon a cast of unknown characters and does so with great success. Chloé Zhao direction is superb. Easily one of the best looking Marvel films of all time. Insane post credits scenes too. #Eternals pic.twitter.com/TbZlqPJxGQ

#Eternals , wow! A lot to unpack. If Marvel movies are a Venn diagram — variations within that overlap — this movie is off the charts. Hands down the most different of any of their films.

#Eternals is DENSE & I felt the weight of the exposition often. Movie’s at its best when the focus is on the Eternals recreating their family – the humor of it & the passion when they fight for each other and the things they love. Also, Angelina Jolie in the MCU is EVERYTHING. pic.twitter.com/rMJz0U2It2

Just got out of #Eternals. I've never been so invested in a story. It was cinematically beautiful. I was engaged the entire time. There's a lot to ingest but they do such a great job to process it all. This feels so different from the MCU, like it's own universe. I loved it.

My favorite part of Marvel movies is how they consistently manage to find new ways to tell their stories. #eternals is beautifully shot & looks very different than previous MCU films. Story surprised me with some of the twists & turns. The 2 after the credits scenes are 👏👍🔥 pic.twitter.com/XUgxkBngeX

#Eternals was not what I expected at all, but in the best way! It went where no MCU film has gone before. The best way I could describe it is an epic fantasy ala Ben-Hur. https://t.co/Qh33IHYd0t

Okay wow… I'm going to make another tweet but #Eternals is A LOT.

Without exaggeration it is the most plot heavy mcu film and it definitely *feels* like the longest. What I will say now is:

– Legit LGBTQ rep
– Legit sexual tension
– Does not feel like it's on autopilot https://t.co/FY8b2gIb9m

#Eternals is perhaps the most ambitious Marvel movie ever made. But the highest compliment I can pay it is that it’s not a Marvel movie; it’s a Chloé Zhao movie. pic.twitter.com/AzlXjJQXVc

OMG, as a diehard MCU fan, I cannot wait to watch and discover for myself what I feel about the film. Marvel’s Phase 4 hasn’t disappointed me so far, and I hope it keeps that streak going!