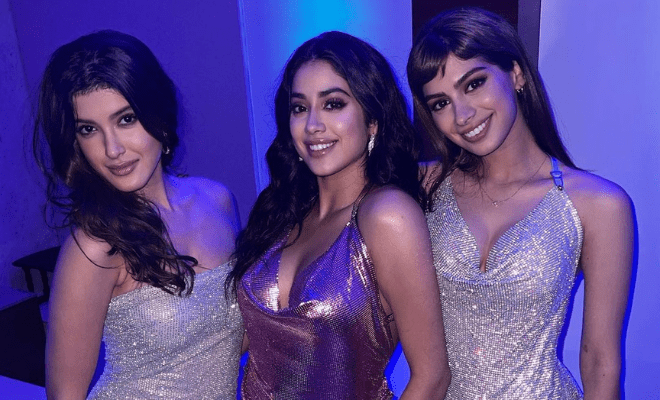 Since the announcement of her movie, GoodLuck Jerry, Janhvi Kapoor has been the talk of the town. Her sisters, Khushi Kapoor and Shanaya Kapoor are also both about to make their acting debuts. Khushi just arrived at the bay after finishing her Ooty schedule for The Archies, while Shanaya’s debut film Bedhadak was also recently announced. The Kapoors hailed The Archies star’s return when her schedule was completed. We bet you couldn’t take your eyes off the photo of them modelling their sparkly dresses.

Furthermore, Janhvi Kapoor took to Instagram on Friday to unveil the first look of her upcoming flick Good Luck Jerry. Janhvi, who shared the picture, also stated that the film will be available for streaming on Disney+Hotstar beginning July 29. GoodLuck Jerry is a Hindi remake of the 2018 Tamil comedy-crime film Kolamavu Kokila, directed by Siddharth Sengupta and produced by Aanand L Rai.

Also Read: Nayanthara And Vignesh Shivan’s Honeymoon Pics Show What Once In A Lifetime Love Looks Like And We’re Here For It

In Zoya Akhtar’s The Archies, Khushi Kapoor will make her OTT debut opposite Shah Rukh Khan’s daughter Suhana Khan and Amitabh Bachchan’s grandson Agastya Nanda. The first schedule in Ooty was recently completed by the crew. Shanaya Kapoor, on the other hand, will make her debut in Shashank Khaitan’s next film, Bedhadak, opposite Gurfateh Pirzada and Lakshya Lalwani, and will be produced by Karan Johar’s Dharma Productions.

Janhvi Kapoor Brings Home A Brand New Maybach. But Here’s Why This Was Heart-Warming