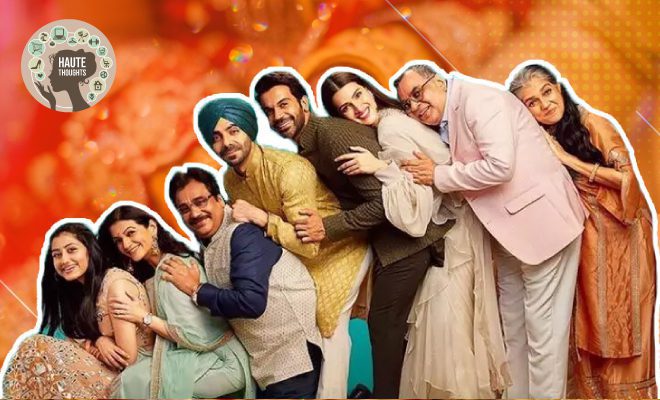 5 Thoughts We Had About ‘Hum Do Hamare Do’ Trailer: Funny, But Aren’t We Done With This ‘Fake Parents’ Trope?

You should never look a gift horse in the mouth. And I’d be stupid to dismiss a film that brings back the pair of Rajkummar Rao and Kriti Sanon, who absolutely killed it in Bareilly Ki Barfi. What’s more, it adds another dynamic duo, of Paresh Rawal and Ratna Pathak Shah, to the mix, along with Aparshakti Khurana. Consider me partially sold on Hum Do Hamare Do, just because of the star cast. But here’s the thing, haven’t we had this ‘fake parents’ wala trope done to death now? The movie, directed by Abhishek Jain and produced by Dinesh Vijan under Maddock Films, is all set to release in October end on Disney+Hotstar. And today, we get a trailer!

The Hum Do Hamare Do trailer promises a lot of fun in typical Rajkummar Rao style. He wants to marry the girl of his dreams, but she dreams of a guy who has a perfect family and probably a dog. Unfortunately, the guy doesn’t have all that, and so a plot is hatched to get some fake parents. Turns out, there’s a lot of history between the two people who’re playing the fake parents, and this clearly turns the situation into a ticking time bomb that might explode with one wrong action, and threaten to ruin our hero’s happiness.

Here are five thoughts I had about the Hum Do Hamare Do trailer:

1. Fake parents is an overused trope now, guys! Can we not?

Just a couple of months ago, when 14 Phere released, I had a similar concern about it. The couple in the film, played by Vikrant Massey and Kriti Kharbanda, use fake parents to get away with an inter-caste marriage. Similarly, there was a TV series called Sajan Re Jhooth Mat Bolo, starring Sumeet Raghavan, where he sets up an entire fake family just so he can marry the girl he loves. And even before that, this whole fake family and fake parents trope has been used several times.

My problem perhaps is not even with the fact the fact that it is overused, but that it often ends up treating the other characters as unintelligent, ignoring the most blatant signs of fraud even when they’re staring them in their face. For example, if you’re setting up such an elaborate plan, don’t you think the people playing fake parents should iron out their stories about how they met, how they got married and their last names?

Along with the cast I mentioned above, there are also Manu Rishi Chadha and Prachee Shah Pandya, who play Kriti Sanon’s character’s parents in the film. And I think all of these actors have pretty great comic timing, and the ability to pull this off convincingly.

3. Something tells me Ratna Pathak Shah is going to steal the show!

Ratna Pathak Shah has this ability to look poker faced and yet crack you up with the lines she says, like in the final scene of the trailer, when she says she’s ready to play a widow. And while we know that both Rajkummar Rao and Paresh Rawal are hilarious, I will personally be watching out for Shah!

4. I have a concern about the possible ending of this film….

This concern carries on from my issue with the fake parents trope. Something tells me, Hum Do Hamare Do has a happy ending. Which means a guy legit lied to the girl he claims he loves, practically defrauded her, and she might still agree to get married to him (from the looks of it). I know that this has happened as many times as this trope has been used on screen. But I just am not too sure how much longer we can ignore the fact that this in movies might have a happy ending but in reality this is fraud and cheating and not so easily forgivable.

5. Hum Do Hamare Do looks like a family entertainer that would be perfect for Diwali.

The cast, the comedy, the band baaja baaraat, all of it make this a total family entertainer that will be perfect to enjoy with the fam during the festive season, in case you do not want to go to the theatres amidst all the festive rush.

Hum Do Hamare Do will stream on Disney+Hotstar from October 29, 2021.