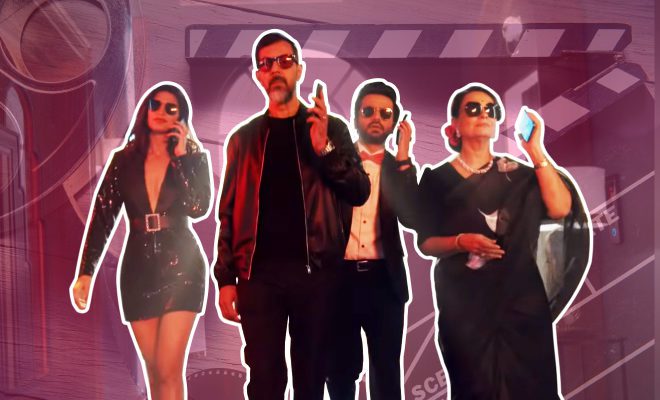 Thoughts We Had About ‘Call My Agent: Bollywood’ Trailer: This Looks Fun, Let’s Hope It Isn’t Afraid To Get Real Too

One of my biggest issues with Bollywood trying self-depiction is that it rarely does it justice. Once in a while, you’d find something like a Luck By Chance that isn’t afraid to keep things real. But most of the times, Bollywood movies that want to show the film industry just aren’t able to do it well, without turning the whole thing into a caricature or keep it very shallow, like we saw in Fabulous Lives Of Bollywood Wives. And that’s precisely why Call My Agent: Bollywood, the new series on Netflix that’s a remake of the French original, Dix Pour Cent, has my eyebrows raised in intrigued. Directed by Shaad Ali, the series stars Aahana Kumra, Ayush Mehra, Soni Razdan and Rajat Kapoor as talent managers from an agency that reps Bollywood stars.

Netflix dropped the trailer for this show, and apart from its core cast, we can expect a bevy of promising cameos from Bollywood, of actors playing themselves!

The show’s official synopsis describes it as “an exciting wild ride into the world of Bollywood, glamour and celebrity.” Aahana Kumra, Ayush Mehra, Soni Razdan and Rajat Kapoor play talent managers at a renowned talent agency ‘Art’. They’re savvy, street smart talent agents who must manage fragile star egos and real human emotions, as they try to save their talent agency from imminent closure after the death of its founder. The series promises to be a funny, quirky, heartwarming and emotional take on the dazzling rollercoaster world of showbiz.

Here are five thoughts we had about the Call My Agent: Bollywood trailer:

Also Read: ‘Little Things’ Season 4 Trailer: One Last Joyride With Dhruv And Kavya Is All About Big Decisions And Little Moments

1. This cast is kaafi promising!

The four talent managers, played by Aahana Kumra, Ayush Mehra, Soni Razdan and Rajat Kapoor, are supposed to be the heart fo the show, bringing in the human element in an otherwise ruthless industry. And it looks like they’re cast well for their parts. I am particularly interested to see what Soni Razdan and Ayush Mehra do with their characters!

2. The cameo line-up for Call My Agent: Bollywood is great, not just razzle dazzle but some substance too

I think I was sold when I saw that they brought in Richa Chadha and Ali Fazal, and Jackie Shroff! Even Farah Khan has some pretty great comic timing, if you remember from Masaba Masaba. And in the trailer too, we catch a glimpse of that! I hope that the cameos aren’t just for the glam quotient but something interesting is done with their characters.

3. This looks funny but let’s hope the satire is effective and not afraid to hit some real issues with the industry

As I mentioned before, Bollywood doesn’t know how to be self-deprecating without being cringey or caricaturish about it. So while the trailer looks hilarious, let’s hope it isn’t just ‘funny’ and really goes hard with the satire, and touches on some genuine issues that the industry is known to harbour.

4. Here for the dialogues, the music and the production scale!

I hear a rap track play in the background as the talent managers walk out in full swag during the trailer, the real MVPs managing things behind the scenes, and I am sold. Also, because it is Bollywood, and Netflix, I look forward to the production scale, which is definitely going to be grand, with fashion and beauty looks worth noting. *fingers crossed*

Call My Agent: Bollywood will be streaming on Netflix from October 29, 2021.

Bipasha Basu Completes 20 Years In Bollywood, Talks About All The Prejudices She’s Faced Over The Years