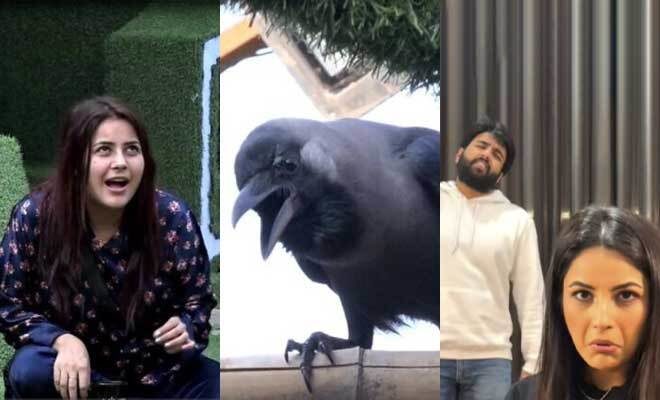 Shehnaaz Gill is probably the most entertaining member of the Bigg Boss family, apart from maybe Rakhi Sawat. From her funny one-liners, conversations with a crow to her big laughter, Punjab ki Katrina Kaif, (as she likes to be called), is our most favourite. And as we celebrate her birthday today, here are the many times that Shehnaaz Gill entertained and made us laugh hard inside and outside the BB house. Take a look:

Such A Boring People

Collaborating with musician and internet sensation Yashraj Mukhate, the duo added a musical tadka to Shehnaaz’s Bigg Boss moment “Such a boring day. Such a boring people.” Featuring Shehnaaz herself, who vocalised the end verse of the catchy track with music by Yashraj Mukhate, the song in no time went viral, with fans lip-syncing it. I mean it’s too addictive, we can’t help.

Another interesting moment of Shehnaaz Gill in the Bigg Boss 13 house was her infamous conversation with a crow. As seen in the episode, Shehnaaz and Rashami Desai were sitting in the garden area while having their morning tea when the former noticed a crow and started talking to it. Replicating the crow who came to visit the BB house, Shehnaaz Gill started saying “ka ka ka.” The clip soon went on to become viral and is still remembered as her best moment from the Bigg Boss house.

ALSO READ: Yashraj Mukhate And Shehnaaz Gill Made Our Day With Their New Song ‘Boring Day’. Twitter Reactions Are Gold!

Did you say Tommy?

The time when Shehnaaz Gill was upset with Sidharth Shukla and said in anger, “Kya karu main mar jaun? Meri koi feelings nahi hai? Tuhada kutta Tommy, sadda kutta kutta?”  While the topic of discussion around the infamous one-liner was quite serious, the dialogue enjoyed immense popularity, courtesy of internet sensation Yashraj Mukhate who composed a song around it. The musician mixed the dialogue with dhol beats and many celebrities including Deepika Padukone, Ranveer Singh, Raveena Tandon, Shikhar Dhawan, Shakti Mohan recreated hilarious versions of it. The song truly became a highlight of 2021.

Her On Point Mimicries

Apart from her one-liners, Shehnaaz Gill entertained the audience by imitating the housemates. Be it her closest friend late actor Sidharth Shukla or Himanshi Khurana, her funny antics left everyone in splits including the show’s host Salman Khan, who too would laugh uncontrollably while chatting with Shehnaaz.

While we all enjoyed the many lovely moments of late actor Sidharth Shukla and Shehnaaz Gill in the BB house, what additionally won our hearts was their funny camaraderie. Filled with ‘tu mujhse baat nahi karta’ the duo would always fight and patch up soon. Their funny banter became so popular that celebrities including Kartik Aryan, Sara Ali Khan too imitated the two during their visit to Bigg Boss 13 house. Moreover, their relationship gave birth to their fanbase which is popularly known as SidNaaz. We loved their nok-jhok.

Shehnaaz Gill was one of the funniest captains in the history of Bigg Boss. From her entertaining tactics in order to wake up housemates to get their tasks done, Shehnaa Gill entertained the audience and housemates with her ideas of offering dand (punishment) to those who would refuse to work.

Just like the theme of Bigg Boss 13, Shehnaaz Gill’s tedhi English had us all laugh too hard. She would often give lessons on spellings and literature to the housemates and say ‘whatever’ ‘mujhe khudko bohot gyaan hai.’

Share with us your favourite Shehnaaz Gill moments in the comments below.