These days, when a celebrity’s name is trending o Twitter with a #Boycott or #ShameOnYou, I pretty much gloss over it, depending on who the celebrity is. Because 9 out of 10 times, if it is a Bollywood actress, she is likely being ‘boycotted’ for the most ridiculous reason. You know, like speaking up in a political matter which the trolls would like to think is not her place. Or wearing something she likes which is too bold for trolls’ tastes and hurts their dainty fragile sensibilities. Or even something as basic as seeking justice for her fellow women. So when #BoycottRadhikaApte trended on Twitter a few days ago, I didn’t pay much heed. If you ignore it, it won’t grow bigger, is my logic. But alas, I did end up finding out why this was trending. And the reason, as Adil Hussain who costarred with Radhika Apte in Parched describes, is ridiculous alright.

In 2015, a film called Parched, directed by Leena Yadav and produced by Ajay Devgn (amongst others) was released. The film, which was set in an desert village  in Gujarat, India, is the story of four women who are oppressed by the society they live in, riddled with social evils like patriarchal traditions, child marriage, marital rape, dowry and more. It stars Tannishtha Chatterjee, Radhika Apte, Surveen Chawla, Sayani Gupta, Sumeet Vyas, Riddhi Sen, Lehar Khan and Adil Hussain. 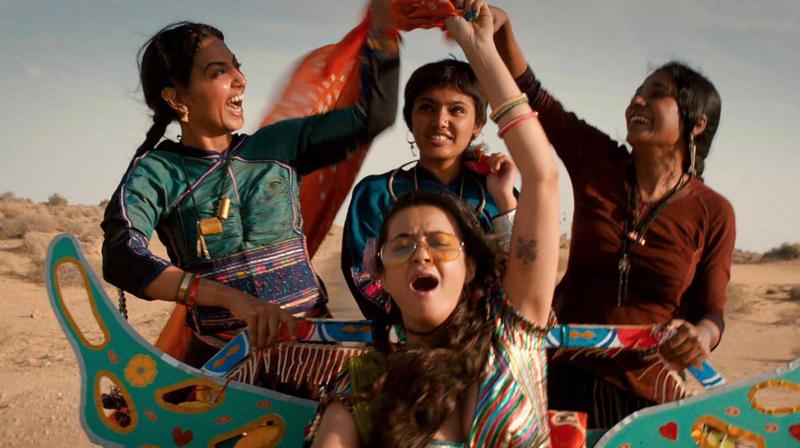 When Radhika Apte was shooting for the 2017 film Madly, a clip of her lovemaking scene from Parched, with actor Adil Hussain, was leaked. The controversy made it extremely hard for Radhika Apte to even leave her home. And since the leak, she has spoken in multiple interviews about the difficult times she faced because of the explicit clip getting leaked.

One of the interviews where she spoke about this was rather recent. And since people have a sick mentality toward women and sex in our country, it might have led people to dig up the same clip. Soon enough, screenshots of Radhika Apte from that scene went viral on social media. The holier-than-thou with delicate sensibilities began clamouring to boycott her, saying that this was against our Indian culture. Yep, a film which is more than half a decade old spawned that stupid #BoycottRadhikaApte trend. Let’s marvel at the joblessness of some people.

Also Read: Radhika Apte Said She Couldn’t Step Out For 4 Days After Rumoured Nude Video Leak. It Wasn’t Even Hers.

It’s not just Radhika Apte who is in the clip, is it? There’s actor Adil Hussain too. And yet, we don’t see anyone trying to boycott or ban him. Just one of the perks of having a certain chromosome which bestows upon you a near-magical ability to avoid judgement. Of course, we’re going to ban the woman and not the man. Thankfully, Adil isn’t just silently enjoying his male privilege. He is speaking up for his costar.

Calling the hashtag trend “absolutely ridiculous,” Adil Hussain talked to Hindustan Times about how he found out that this trend had happened and how he thinks it’s rather lame.

“I got to know about it a couple of days back, when I saw some Google alert. I think it’s ridiculous to trolls Radhika or make a big deal about that scene. I don’t pay much attention to such things at all. I just think the only way to respond to it is, that you don’t (respond at all).”

This tactic is one employed by many celebrities to maintain their mental sanity. But we all know, it is easier said than done, especially when you are the person at the receiving end of most of the ridicule. There’s no ignoring it completely when you live your life in the limelight. What you can do then is to help amplify the importance of changing attitudes. And Adil Hussain makes an important point in that vein when he says we shouldn’t just blame the trolls because the real culprit here is the education system.

“Our education system is almost to get a job, be job literate. It’s not the education, which we’re receiving since British era… to make a bunch of people run the British machinery, which was left behind. We’re still running that. The purpose of education was to make them a working machine for the British Raj. It needs radical change, and I hope the Indian government will do it soon,” he says.

Well, here’s hoping that people listen. We’re literally parched for more sensible conversation around art, minus the judgement, the censorship, the easily ruffled feathers and the ‘boycott’ hashtags in this part of the world. Sigh.