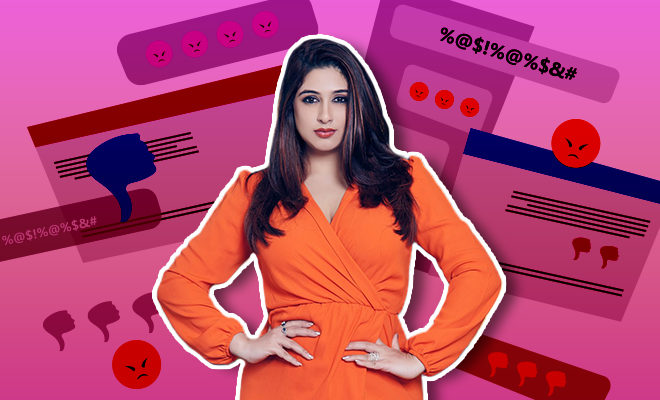 On social media platforms, it becomes easy for people to put across their views and opinions, even about someone’s face, body or work that they won’t usually say so bluntly in real life. Because, what’s the worst thing that could happen, they would get blocked? Big deal! What I mean is people don’t say mean things about someone’s body and how much they hate someone’s guts as easily on their face as they would in the comment section on one of their posts on Instagram. Celebrities have a huge following and are therefore used to hurtful comments and negativity on their social media posts but that doesn’t mean it’s it doesn’t affect them.

However, everyone has their own way of dealing with body shaming and hate. While some block their trolls aka block the negative vibes, others expose them, shut them with a response and then there are some who just don’t give a damn. TV actor Vahbiz Dorabjee who debuted in Indian television with the show Pyaar Kii Ek Kahani regularly faces body shaming and negative comments about her divorce. But she chooses to pay no heed and thinks as far as you have confidence in yourself, this can’t bother you. And, suddenly this makes sense to me.

In a social media interaction with her followers, she responded to a user who asked how she handles body shaming and hurtful comments. She said, “You have to have confidence in yourself then no one can shake you. I believe in myself… not in people’s opinion. The dogs will keep barking but the lion keeps walking.” This is actually great advice because a lot of times, we let people get into our heads and allow them to mess with our mental peace just because we pay too much heed to their opinions. These opinions are not even real most of the time and are aimed to solely make you feel worse about yourself. Being confident and believing in yourself is how you beat them.

Not just celebrities, this happens to everyone. You post a picture that you are pretty confident about but a negative comment can leave you second guessing about your own body and bring your confidence down. Well, the only thing we should be giving attention to is building that confidence up and taking the trolls down, instead of our posts. Vahbiz Dorabjee recently shared a post on her Instagram on body shaming and wrote, “Say NO to #bodyshaming BELIEVE IN YOURSELF and don’t give people the Power to turn their words into a knife and cut yourself.Dont give them that Power over you..Everyone is Beautiful in their own way.. Let the Dogs Bark..The Lion is still the King..” That will be my life’s motto from now on, thanks!

Also Read: This Comedian Was Shamed For Her Weight But She Wasn’t Having It. Why Do Confident Women Rattle Us?