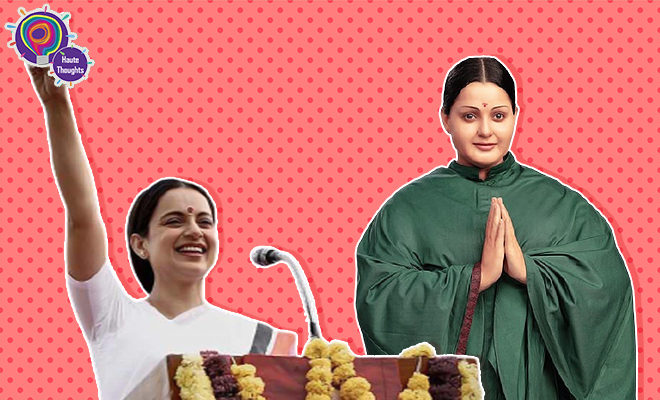 5 Thoughts We Had About Thalaivi Trailer: Kangana Ranaut As Jayalalithaa Is The Actor And On-Screen Politician We Wouldn’t Mind Stanning

It’s easy to not like Kangana Ranaut after the vitriol she spreads on social media. But what is frustrating and marvellous at the same time is just how easy it is for her to remind us that it is equally easy to like Kangana Ranaut the actor too. We may vehemently disagree with her politics and the way she trashes other women (and men) to toot her own horn. But one look at her Thalaivi trailer, the J. Jayalalithaa biopic she’s headlining, and we realised the actor and on-screen politician we see is someone we don’t mind stanning. As a friend said, credit where credit is due. And birthday girl Kangana Ranaut just presented her fans with quite the gift.

Thalaivi, directed by Vijay and also starring Arvind Swamy, Nassar, Bhagyashree, Raj Arjun, and Madhu Bala is based on the life of actress-turned-politician and former Chief Minister of Tamil Nadu, J Jayalalithaa. The trailer gives Kangana Ranaut plenty of opportunities to flex that acting prowess we haven’t seen much of since Panga. We get to see her as Jayalalithaa, the South Indian superstar and queen of romance as she develops a relationship with actor MGR, who went on to form the AIADMK party and become the Chief Minister of Tamil Nadu in 1977. MGR is the one who brought Jayalalithaa into politics, and is played in the film by Arvind Swamy.

There is absolutely no doubt that the trailer is quite powerful and is bound to get the audience excited. Here are five thoughts we had about the Thalaivi trailer and Kangana Ranaut in it.

1. Kangana Ranaut looks stunning as the younger Jayalalithaa and grows progressively powerful and mature as the character ages. Her expressions are so on point, we even catch a glimpse of one of the dance numbers in the trailer. And Kangana nails every single look. In the latter half of the trailer, she radiates power as a woman who wants to overcome the patriarchy and prove herself.

2. Arvind Swamy’s transformation into MGR looks as incredible as Kangana’s into Jayalalithaa!

Also Read: Kangana Ranaut’s Fitness Journey From Putting On 20kgs For Thalaivi To Now Being Fit For Tejas Is Inspiring

3.  Once in a while, we all dig movies where the heroine triumphs over her oppressors and naysayers, mouths filmy dialogues and reigns like a queen. And Thalaivi seems to have plenty of all that masala.

4. Biopics do have a knack for downplaying problematic traits of their subject and glossing over anything that makes them appear in a bad light. In the late Jayalalitha’s case, there’s plenty of controversy, from the  centralisation of power to the numerous corruption cases filed against her to favouritism. And I hope that the film represents the negative as well as the positive.

5. While Kangana delivers some of her best lines as the younger pre-politics Jayalalithaa, I am eager to see if the ‘Amma’ cult angle has been explored by the film and how she performs in those scenes. It is said that her followers and ministers would bow down to her and their loyalty was unwavering, almost divine. There would be posters of her in a goddess avatar all over the state and her allure was almost magical. It would be interesting to see the extent to which the biopic explores this aspect of the former Tamil Nadu CM who held that position for fourteen years.