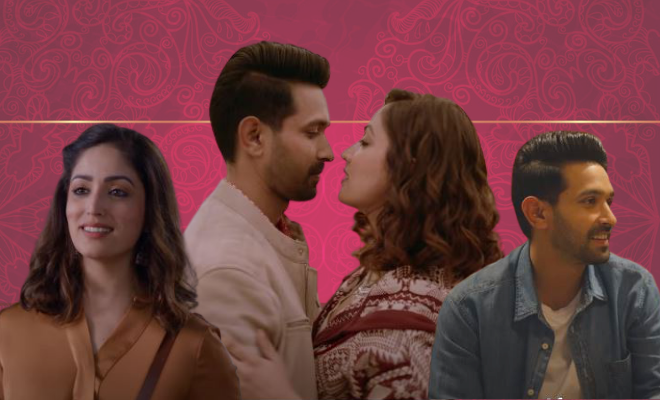 Bollywood rom-coms have really started to come of age, haven’t they? But because it is Bollywood, as in Indian cinema, the coming of age is naturally tinged with some typical desi attributes. For example, the whole Dulhaniya franchise makes for a heartwarming love story at first glance. But when you think about it, it does glorify stalking quite a bit. And this undercurrent of sexism and deep-rooted patriarchy is what makes me slightly wary of watching of Bollywood romances. The newest entrant on that front is Ginny Weds Sunny, which stars Yami Gautam and Vikrant Massey in the lead. The film, directed by Puneet Khanna, written by Sumit Arora and Navjot Gulati and produced by Soundrya Productions, is all set to release on Netflix next month. It’s trailer dropped early on Friday, and let’s just say, I’m super intrigued by what this love story could offer.

Ginny Weds Sunny’s synopsis pretty much lays out the premise for us. Evidently from their names you’d have realised that this is going to be an out-and-out Punjabi scene. Yami Gautam’s Ginny lives with her mother (Ayesha Raza) who is a matchmaker, in Delhi. Naturally, Sima Auntie from Delhi wants to find a nice boy for her own daughter, but for some reason, picks the worst of the lot. Ginny doesn’t want them; she wants a ‘love marriage’, which is like the Santa Claus of our early 20s. Every person wants a love marriage! Enter: Vikrant Massey’s Sunny, who is rather risk averse about the whole long-term commitment scene. He is super cheesy and sprouts filmy lines which are sometimes rather hilarious. And once he sees Ginny, he wants to make her his wife.

But life ka relationship status is always “It’s complicated”. They’re both faced with their own drawbacks and confusions, and major compatibility issues that start coming to the fore. Whether they make it to the aisle or break it off for good, that’s I suppose the story.

As I mentioned earlier, watching the world with woke-tinted glasses had made me tread rather carefully around romantic comedies. Are the women stereotyped? Are the men latently sexist? Are the tropes glorifying something regressive.

Well, armed with these pre-conceived filters, I watched the Ginny Weds Sunny trailer, and here are five thoughts I had about it!

Ginny’s mother is a matchmaker so I have a feeling we’ll get that requisite montage of bad rishtas lined up for her, which prompt her rebellion to opt for a love marriage. Now here’s the thing, when usually such things are shown, they always tend to be caricaturish and rather exaggerated. I’m not saying the boys you find via matchmaking are not all that ridiculous, they are, speaking from personal experience. But when your candidate is your own daughter, who you know is not just beautiful but also has certain expectations from a guy, how can you get it so wrong as to show her boys who she rejects right away?

2. Vikrant Massey’s Sunny is so cheesy! But not annoyingly so, which makes a huge difference.

Look, I’m a self-confessed Vikrant Massey fangirl, and I feel I should put it out there. Massey sahib is all kinds of adorable, not just when he is playing the sweet and supportive feminist in Chhapaak, but also, surprisingly, when he is playing a cheating husband and fraud in Dolly Kitty Aur Woh Chamakte Sitare. In Ginny Weds Sunny, too, his usual simple-and-real guy charm is full cranked up, which helps sell the whole idea that someone like Ginny could fall for a cheesy guy like him with conviction.

His cheesiness doesn’t seem annoying. Like a certain character from an Imtiaz Ali film, whose effervescence made me want to throw something at her!

3. Hoping this mismatch is not your typical Bollywood romantic couple that loves each other for all the wrong reasons

From the trailer, it looks like what Ginny wants, she doesn’t really know. And it is definitely not just a regular love marriage, though when is love marriage just regular, haan? Her relationship with Sunny is way more complicated, especially when you factor in the 2-3 other men that enter into the picture in the latter half of the trailer. Sunny seems pissed at her inability to make up her mind.

A lot of Bollywood movie couples reach this point in the story, and then everything just magically solves itself, which for me makes for a very hard sell. Didn’t you guys separate because you both were problematic? Two negative do not a positive make, at least in the case of relationships! If Ginny and Sunny are a mismatch, then let them sort their problems realistically instead of just in the name of love because they claim to be the perfect match.

Ayesha Raza has this dialogue in the trailer about how Punjabis have only two things in their lives that really matter—emotions and paneer! The whole scene with Vikrant Massey being angry and she being calm and poker faced when she utters the line is so hilarious. The film’s description promises a full-to Punjabi wedding dhamaal, replete with music, shenanigans, witty one-liners and of course, siyappa!

The fact that all the characters are going to be sassing each other in Punjabi, tinged with that Dilli ka tadka, makes me look forward to laughing a lot during this movie. Special mention for the vibrant costumes and the whole bright colourful vibe of that I sensed!

5. How many remakes of Mika Singh’s ‘Saawan Mein Lag Gayi Aag’ are there this year, really?

Arre bhai break lagaao! We just recently saw Kiara Advani and Adiya Seal in one version of this song from the movie Indoo Ki Jawani. And now Ginny Weds Sunny also has one? I even caught a glimpse of Mika Singh shaking a leg, which means this is probably going to be one of those end credits songs. I get it, this was a huge sensation when it came out in the 90s, back when Indipop was all the rage and Mika Singh was just following brother Daler Mehndi’s footsteps.

But Bollywood, yaar, ek hi song kitni baar remix karoge? Are y’all out of original compositions or what?