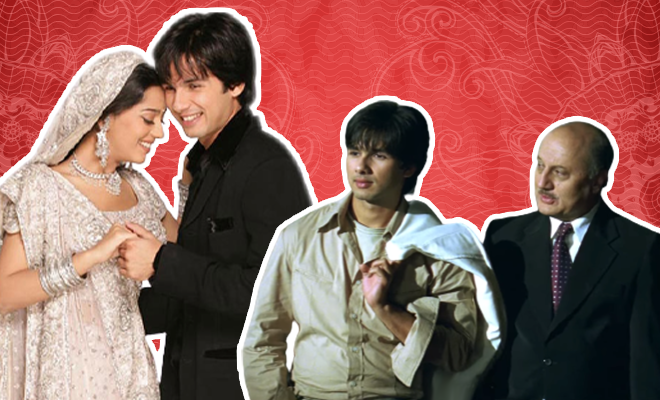 If you thought watching Baghban with your parents is scary, let me assure you watching Rajshri films like Vivah or Hum Saath Saath Hain with them is scarier. Why? Because you’re enjoying this peaceful family bonding, and everyone’s good. And then BAM! You don’t know what hits you when you’re suddenly made to feel like a bad person for not loving your siblings enough or for being a tad more concerned about your daughter’s marriage prospects because the ground reality is, dark complexion in India gets too much hate! If you were a kid when these movies released, you were narrowly saved from feeling super awkward. If not, oh well. Especially, if you’re of marriageable age (in India that’s a very broad range), the Shahid Kapoor and Amrita Rao starrer Vivah would seem like a very awkward watch with your parents. It’s like Indian Matchmaking, but instead of Sima from Mumbai, there’s Seema Biswas as the cruel aunt who’ll give you the death stare if you laugh.

Now, I remember watching Vivah when I was barely out of school;, and for a long time, thinking it was all so romantic. The whole ‘meeting on the terrace’, the stolen glances, the ideal life partner who’d never abandon you no matter what happened, how you looked, or where you were from. And of course the ‘all’s well that ends well’.

But when I grew up, marriage felt like a sham, like a restrictive shackle that I was being put into, and something that didn’t seem very durable because I was repeatedly told it was a delicate relationship. Too many things could go wrong. I felt lesser and lesser like Poonam and more like Chutki, who’d have to sit home and listen to all the taanas because she was never going to find someone who really ‘saw’ her beyond her colour. I took a leaf out of Shruti Kakkar from Band Baaja Baaraat’s book, and proclaimed, “Naah, main toh single hi best hoon”.

And then, I grew up a little more. Now, dangerously close to 30 and considering marriage seriously had made me more, shall we say receptive, to the conversation.

Vivah completes 14 years today. And as I was browsing social media for its cast’s reactions and stuff, I came across one of the clips from the film where Anupam Kher’s character, a father, is having a heart-to-heart with Shahid Kapoor’s character, (no points for guessing, he’s named Prem), his son. You see, the film’s version of Sima Taparia, played by Manoj Joshi, has found this nice rishta for Prem, a small-town girl called Poonam. And Prem’s father is trying to sell him on the idea of considering marriage with her.

A Film that continues to become the Darling of the Nation 💞 Thank you Sooraj ji 🙏 There are films and then there are Rajshri Films !! @rajshrifilms you continue to Celebrate Indian traditions and emotions like No one else 💫 I Remember this day was the last day of shoot.. We shot at a waterfall in Lonavala… I was all of 19 and totally surrendered in good faith of my most wonderful director Sooraj Barjatya …No one like him !!! I knew this was a Big Film but that it would reach this far in the hearts 💞 of the audience comes as a wonderful blessing 🙏 On TV #Vivah has already broken the record of being the most played weekend movie This Film recently released on Netfilx and trended in India, Bangladesh and Pakistan at No1 🙏 #25weeks #LastiSilverJubileeFilmOfIndianCinema #VivahTrendingOnNetflix #VIVAH #WeekendVivah #14yearsOfVivah #rajshriproductions #25weeks #rajshrifilms 💫

The conversation in Vivah starts off with a very typical mindset, with the father stating that since Prem had finished his studies and had started contributing to the family business, he might as well get married. He then goes on to explain why marriage at this age is the right choice, what makes a good marriage work, and why Poonam would make an ideal life partner. The duo are seen talking in office, then taking a stroll in the night, driving in the car and even at a very hip cafe that millennials like us would frequent. It’s all to give you very obvious cues that he isn’t an orthodox man, but a sensible one who takes the best out of the past and passes it on to the future generations.

Back then, watching this scene would mean constantly exchanging glances with your parents and having them tell you, “Dekho! Kitna sahi bol rahe hain!” And you smiling awkwardly. Growing up means understanding that this was probably the most sane advice he as a parent could’ve given his son. And what was particularly striking was how he decided to do the whole thing. That, my friends, is a lesson to add in Parenting 101.

For starters, the father talks about how this is a right age to get married. When you get married young, you’re not too set in your ways and have a lot of experiences that you’ve never had. As a couple then, you can adapt and adjust easily, grow together, and have someone to share these new experiences with. As someone who has begun to detest change as a I grow older, I do find it difficult to see things from other’s perspectives. It makes me wonder if I would have been more amenable had I gotten married earlier?

Another point is that after you’ve spent enough time getting to know each other, you can finally consider starting a family. The biological clock ticking is a very sexist argument made against women marrying late. But what we must consider is that age catches up with women and men both, perhaps hindering them from enjoying some of the best years of their kids’ lives because of their older age. Or maybe, getting married late, you might rush into having kids (even if it’s adopting) before you’re ready, and that again could hurt your marital bliss.

When Kher’s character in Vivah talks about trust, honesty and friendship in marriage, that too hits different than it did before. When younger, our notions of marriage are romantic and fantastic. Adulting is recognising that these are superficial demands, and what a good marriage needs is substance. Most people don’t marry for love, but for companionship. And as This Is Us taught me, that can be a beautiful partnership too, especially when you’re growing old and need someone, after all your loved ones are either dead, busy or have moved away.

What I loved the most though, was how the father leaves the girl’s photo until the very end. It’s a nice way of letting your child decide for themselves and not be influenced by any parental pressure or other factors into making the decision. In fact, it reminded me of Akshay’s Mom from Indian Matchmaking a lot, and how she was the exact opposite! Kher also tells Shahid that he should follow in his brother’s footsteps and get married… basically cites very similar reasons like Akshay’s Mom did to convince him to get married. And yet, had she only given him the pep talk that was there in the movie, Akshay wouldn’t have been this confused and pressured.

As someone who has been explained this by elders enough times now, it took a while for the lesson to sink in that maybe, just maybe, an arranged marriage in my late 20s isn’t exactly a frightening prospect. While shows like Indian Matchmaking can scare millennials and Gen Z away from the concept of marriage, it isn’t that bad when you remove all the regressive bits and pressure from it. What truly matters is the intent, the purpose with which you’re entering the relationship. If you’re mature enough and doing it for the right reasons, because YOU want companionship and love and your own person, then it can be the most natural and beautiful step in your adult life. And parents can play a huge role, through both practicing and preaching, in making their children ready for this commitment. Don’t push them in, but whisper the map routes in their ears and let them pick which detour they want to take.

I’d like to think that if a Vivah was made now, the father would still explain the same to his son. And if his son said that he didn’t want to get married even then, because he isn’t ready or doesn’t consider something he needs to do, then he would respect it. Oh, and if he doesn’t want a Poonam but a Prem for himself, then that would be okay too. Hi, can we have this movie please?