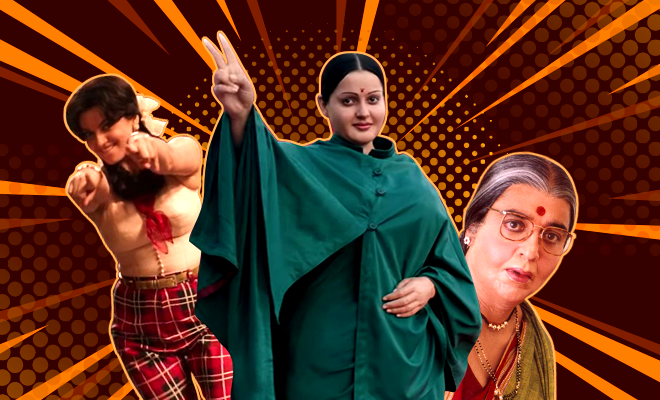 It is absolutely fascinating to see an actor embody a historical figure, transforming into them on-screen. It doesn’t even have to be someone we knew, just the prospect of seeing a performance to tell a real-life story is exciting. For a movie buff like me, biographies of famous personalities, translated on screen and played by an actor so it looks true to life is one of my favourites. From watching Clair Foy as Queen Elizabeth II in The Crown to Ranbir Kapoor embodying Sanjay Dutt in the flawed but influential film Sanju, I can’t get over the movie magic that tells the stories of influential people through recreations. Which is why I am excited to see Kangana Ranaut’s next release, a dramatic feature based on the life of former Tamil Nadu CM Jayaram Jayalalithaa.

There has been a lot said about Thalaivi already. The movie is set to release in three languages, Tamil, Telugu and Hindi. Directed by A.L. Vijay, it also marks the second time where Kangana is playing a real person after Manikarnika: The Queen of Jhansi. The first look of the film that came out this weekend is already the subject of many social media debates and we wanted to offer our two cents as well.

Let’s start with the obvious truth staring everyone in the face – the prosthetic makeup done on Kangana for her transformation into a much older Jayalalithaa looks totally amateur. According to the makers of the film, renowned makeup artist Jason Collins, who’s resume boasts films like Blade Runner and Captain Marvel, has lent a helping hand in putting together her look. I mean, we loved the ‘Skrulls’ from the Brie Larson-starer but it does not look like the same people have worked on this look. The idea should have been to age Kangana in order to depict her as the influential political figure so revered by millions, not just put her in a fat suit and slip on a droopy double chin.

When we saw Meryl Strep turn into Margret Thatcher, she was given prosthetic teeth and a nose that altered her appearance somewhat, yes, but not so much that it looks comical. Even Deepika Padukone drew the line at scar makeup for her role as acid-attack survivor Laxmi Agarwal, who is much more slender and smaller in real life. It is about capturing the essence of a person, without pushing the envelope and getting so mixed up in physical technicalities that is . We hope the final result in the movie is much better than this, fingers crossed!

ALSO READ: Kangana Ranaut And Deepika Padukone Are Spending Hours On The Makeup Chair To Get Their Prosthetic Makeup Done. We Love Their Commitment

However, this unleashed a sea of memes on the internet and boy, people did not hold back!

Even #KamalHaasan could have been better choice for #Thalaivi #KanganaRanaut is loooking like some one blew air in annabelle doll😂
😂😂 pic.twitter.com/5zEy2Ic2ud

This is how she looks now #Thalaivi pic.twitter.com/h7LFMt5O72

The first look his getting a lot of flak for the prosthetic makeup but it was the first half of the teaser that was enchanting us. In a side by side comparison of the film scene with a young Jayalalithaa shows how well Kangana has done her research as a performer!

Her movements, mannerisms and expressions are so eerily similar to the actual clip, we are lobbying to get some more of it already. We know Kangana is a fearless actress and she can sell the role solely based on her prowess of performance only. But it will definitely be put a damper on things if she gets lost in the sub-par makeup. She wouldn’t just figuratively get drowned by all those prosthetic makeup, it will be quite literal if the layers don’t let her natural charisma shine through. For now, we can only wait until the full trailer comes out to fully realize what to expect from the film. We just hope it a better than this!

From Priyanka Chopra’s Kashibai To Kriti Sanon’s Parvatibai In Panipat, There Are So Many Finer Details To The Looks Of These Maratha Warrior Women