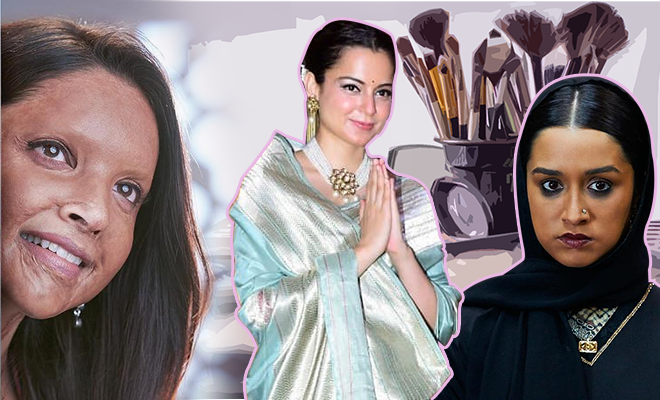 Kangana Ranaut And Deepika Padukone Are Spending Hours On The Makeup Chair To Get Their Prosthetic Makeup Done. We Love Their Commitment

As a 90s kid, watching Chachi 420 on the TV on a Sunday afternoon was a whole event. My 7-year old naive little heart could not comprehend the fact that Kamal Haasan was indeed the one to transform into chachi. The film was way ahead of its time in terms of technical prosthetic makeup. Since then, we have seen many instances of actors using this art form to transform into their characters.

Having said that, prosthetic makeup did seem to be restricted to male actors for the longest time. From Amitabh Bachan in Paa to Rishi Kapoor in Kapoor & Sons, makeup artists were given just male subjects to work with.

Fortunately for the fearless actresses working today, we are indeed seeing a shift in the narrative. These leading ladies are not shy about going all out for their characters, going further to change their appearance completely. We are also digging their unique blend of using prosthetic makeup to enhance the character, keeping it realistic and true to the actual person it’s modelled on.

The recent scoop to hit the web about this is Kangana Ranaut’s imminent transformation into Indian politician Jayaram Jayalalithaa. The biopic titled Thalavi will see Kangana playing the influential female politician and the deets are just pouring in. Already marred in rumours about lack of funding (Kangana and controversy do go hand-in-hand), the film’s producer Vishnu Vardhan revealed their plans for Kangana’s makeup. Reportedly, Captain Marvel famed makeup artist Jason Collins has been roped in for the job and it sounds exciting!

Vishnu revealed, “It’s very disheartening to see baseless rumours being spread without verifying. The pre-production is in full swing and the team is in Mysore for the recce and as planned earlier the shoot will start post-Diwali. Kangana has four looks spanning different ages in the film and we need a good amount of pre-production for that. We have roped in Hollywood makeup artists for Kangana’s makeover”, he elaborated.

Another A-lister who is just about joining the ranks of movie makeup magic is Deepika Padukone. The actress has no qualms about transforming into the role of acid-attack survivor Laxmi Agarwal. She confessed, “It’s a very important film and I feel that the story which we are showcasing in our film needs to be told.” According to set reports, it took four hours to put the prosthetics on and even longer to get it off completely without damage. Spending hours on the makeup chair every day does take a lot of commitment and we are sure it will pay off on screen.

It isn’t just full chameleonic transformations that have been seen on screen. Back in 2017, we saw Sharddha Kapoor use prosthetics to help with the dialogue delivery of her character in Haseena Parkar. She revealed, “I managed to gain seven to eight kilos and for the rest, we took help of prosthetics, and silicon prosthetics in the mouth. I had to change my look as well as the voice as my character ages. When you get ready to play a character then you start feeling, walking and talking like that person. It’s psychological”, she elaborated.

Bollywood’s leading ladies are certainly pushing the envelope when it comes to portraying real-life characters. It will be interesting to see Kangana take the prosthetics route in her next as well!