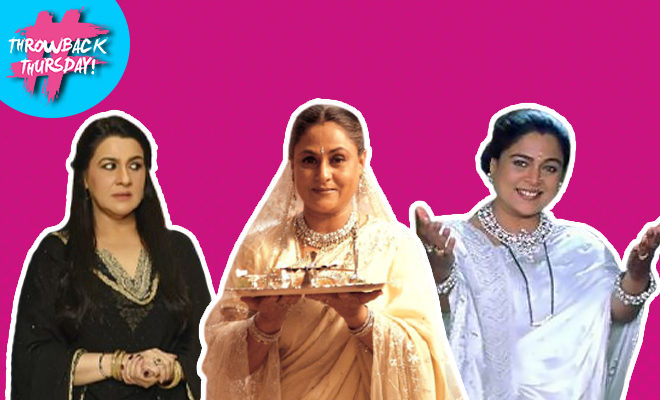 Throwback Thursday: The Evolution Of The Mother-In-Law In Bollywood

I won’t lie that while growing up I had this really horrible image of mothers in law! My grandmother passed away much before my dad got married so my mom didn’t have a MIL. I had not seen her struggling to get along with one. But oh boy, the movies portrayed the mother-in-law in such a bad light. Calling the daughter in law “kulta” “karamjali” and all such weird ass abuses monopolized by MILs was super common in Bollywood. And then there were scenes in which the husband’s mother would inflict physical pain on his wife. Dipping her hand in hot water, pushing her off the stairs and depriving her of basic rights – such a regular sight in the movies.

Then there was this other type of mother-in-law in Bollywood who’d be the most bechara person in the entire movie. The bahu on the other hand was the evil kind. She’d be “modern” and the MIL is all self-sacrificing. She’d give away her kidney if she had to. This MIL will be the one getting thrown out of the house or being abandoned.

Either way, there was a war between saas and bahu and who’d benefit from that? The men of the house! As the two women are pitted against each other and of course, stereotyped AF, they’d fight to please the man in the house. Internalised misogyny wasn’t fictional. It was more prevalent back in the day and Bollywood exhibited that. Of course, that stopped from the narrative being changed.

Thankfully, over time as the generations evolved, so did the saas-bahu equation. The melodramatic evil or helpless mother in law made way for women who are flawed, conditioned a certain way but also accepting. They are not blinded by their love for their son. They are evolving and thinking from a woman’s perspective.

Here’s how the saas went from melodramatic to super cool!

Bindu plays the role of a monster-in-law who is classist and wants a daughter-in-law who she can flaunt in front of her rich friends. However, when her son marries a simple woman (Rekha), the domineering MIL decides to drive the bahu away by hook or by crook. She frames her in a theft crime, accusing her of stealing cash and jewellery. She threatens to get her arrested if she doesn’t leave the house. A twist in the end though makes the monster-in-law learn her lesson. It was a typical melodrama but at least it came with a moral of the story!

Aruna Irani plays Anil Kapoor’s stepmother in the film. While he is devoted to his stepmother after he lost his biological mother at a very young age. His father was a rich landlord and his stepmom was in it just for the money. After he passes away leaving all his money to his son, she is all set to exploit his love for attaining his wealth. When she gets a smart and educated bahu, much against her wishes, she plays several tricks to scam her son, which are nullified by his wife. This not only stereotyped MILs but also stepmothers.

In this one, the mother-in-law is a specially-abled woman and the bahu is an evil woman, who is ambitious and career-oriented. She’s the original Moira Rose (if you know it, you know it!) and goes around slapping people like it’s her workout. Eventually though, to show her as a new improved bahu material, she quits her job and becomes a housewife. And the MIL is still nice.

Reema Lagoo is a name synonymous with the upgraded mother-in-law Bollywood gave us. In this film, she is a loving mother and treats her daughters-in-law quite nicely. She is laidback until the people around us brainwash her to become evil just for a bit. She realises her mistake in time and becomes a nice saas and mother again. Start of a revolution? A refreshing change, I’d say!

Jaya Bachchan takes her mother-in-law duties to a whole new level and none of it involves getting too possessive of her sons or being evil. She has lived a restricted life and hates to interfere in her children’s lives. She loves her sons but is not a bit interested in home politics. What she likes about being a saasu maa is the fun bits – the cute traditions, family fun and all that. She’s a sweet one!

Amrita Singh plays a dramatic mother who is in a bad marriage and her life revolves around her son. Which means when he falls for a woman who is not even of the same caste, she isn’t the easiest to impress. She doesn’t pull off dramatic, damaging tricks like framing the bahu in theft or burning her hand. But she does take her position as the mother of the groom seriously, being a little territorial and throwing occasional taunts around. She’s hard to impress, a little dramatic but she’s good at heart.

Neelu Kohli brings good humour to Manmarziyaan as she plays Abhishek Bachchan’s mother in the film. She is looking for a wife for her son and is hoping she’d have more authority on it. Why? Because when she was younger, the mothers of prospective grooms would do the same. But when her son sits her down and explains she need not repeat the same, she gets it. The modern mother-in-law needs a little explanation but eventually they come around and give the children the space they need to make life decisions.

ALSO READ: BaeWatch: “My Mother-In-Law Expects Me To Handle The House Like She Does. I Can’t!’

Tanvi Azmi plays Taapsee Pannu’s mother-in-law in the film. It’s not like she went through any kind of abuse but she did make a lot of sacrifices throughout the years. So when she learns to look at her daughter-in-law as not her son’s wife but as a woman, she not only understands her but realises she could have supported her better. Mothers-in-law have come a long way, in real life and in Bollywood!

ALSO READ: Sharmila Tagore Says The Onus Is On The Guy’s Family To Make A Bride Feel Welcome. We All Need A Mother In Law Like Her