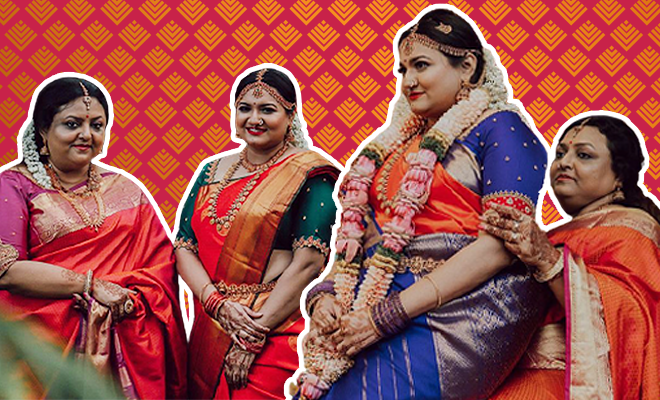 This Bride Made Sure Her Mother Did Her Kanyadaan Because Her Mom Was Always There For Her. This Should Be Normalised

The torchbearers of traditions will have a huge problem with any tweaks you make to the customs being followed for ages. Many people don’t care if those customs are patriarchal in nature and take away from women. But there are people who don’t feel the need to conform to rigid customs and do what holds more meaning to them. It’s good to question things and rationalise. This bride went ahead and got her kanyadaan — that is traditionally done with fathers — with her mom instead.

Wed Me Good shared a heartwarming story of a bride and her mother. Preethi’s father walked out when she was 12 years old and was raised by a single mother since then. “I am the only child of a single mother! My father left the picture when I was about 12 years old, with no contact and my mother took on both roles and raised me alone. She worked really hard, and never let me wait for anything that I needed. So this amazing woman in my eyes was the head of our little family,” she wrote.

In India, when a woman raised by a single mother is getting married, she is suddenly made very aware of the absence of her father. With customs such as kanyadaan and more being handed over strictly to the father figure in your life, your relatives will try to ready a substitute for you. In her case, it was her uncle. “When the time came to start planning for my wedding, I decided I wanted a traditional Tamil Brahmin wedding as well, and traditionally the bride is seated on her father’s lap during the Kanyadaan and while the thaali is tied on the neck of the bride. My heart sank a little the moment a family member said, I would have to sit on my uncle’s lap for the ritual,” she wrote.

But why should an uncle do your kanyadaan when it’s your mother who gave you birth and raised you? She deserves to do it and not just any male in the family because he is a man. How does being a man make you more deserving? And yet, it wouldn’t have been easy. The bride explained, “I mean, I realised then that Brahmin wedding traditions are so staunch and rigid that it would take a lot to convince a priest to allow me to sit on my mother’s lap, and let her perform my Kanyadaan as the rightful head of my family. We went through more than a dozen priests before we found the right one who had an open mind towards my request!”

So the day arrived and she sat on her mother’s lap…the same lap she was raised and loved on. Her mother deserved every bit of respect she got and anyone else giving away the daughter in Kanyadaan would be really unfair. “She is the coolest mother and more of a best friend to me! And I am so sure there are thousands of single Indian mothers slaying it each day and they deserve to get this chance at their daughter’s wedding too, instead of just being present in the background,” Preethi wrote.

I feel mothers deserve a much higher place in our traditions. Fathers are great but really, what mommies do for their kids need more respect. “It’s heartening to note this. In many cases for the sake of upholding the tradition, the daughter n mom compromise n have the long estranged father do the role or substitute him with other members. This is an excellent step. More power to both of you,” a user wrote.

ALSO READ:This Couple Had A Gorgeous Wedding Without All The Sexist Wedding Traditions. We Love Everything About This

I believe it’s all about sentiments and a mother doing the kanyadaan should be normalised so a bride doesn’t have to go through so many priests to find one that agrees. It’s not just about kanyadaan. It’s about people being rigid on patriarchy. Normalise children taking their mom’s name as their middle name instead of their father’s. Women deserve a better show of respect in the lives of their children!

ALSO READ:This Bride Ditched Her Blouse And Went For An Elaborate Mehendi Choli Instead. Brides of 2020, Take Notes!