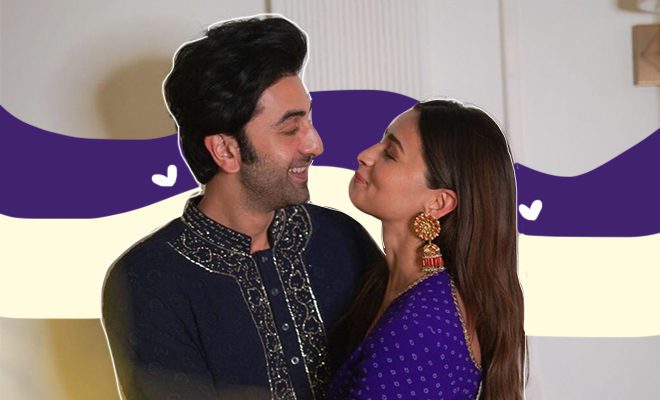 Ranbir Kapoor Said He Doesn’t Eat Or Shower Unless He Knows Where Alia Is. Can Men Stop Feigning Incompetence And Passing It Off As Love?

It’s nice when someone you love constantly wants you around. In some ways, we’re all like that. When in love, we just want our partner close to us not just emotionally but also physically. And as adorable as that sounds, it’s not very practical. We’re all fully grown adults and have a life and a career and, of course, a social life. Now, imagine being in a relationship with someone who refuses to do the most basic things like eating and going to the loo unless they know where you are. Isn’t that a little OTT? In a recent interview, Ranbir Kapoor confessed that he boasts about being independent and detached but he is heavily dependent on Alia Bhatt. The actor also shared that he does not even go to the bathroom or eat unless he knows where Alia is while adding that it’s extremely important for him to have her next to him even if they’re not doing anything romantic or even talking.

Now, I know this sounds kaaffii cute but let’s be honest, it’s not very practical. For the longest time, men have been dependent on women for their most basic needs and I think it’s time we understand how problematic it is. It may sound cute to have someone who cannot stay without you but if they refuse to do something as simple as going to the bathroom or eating unless they know where you are or constantly want you next to them, it’s a little too problematic. TBH, men have been feigning incapability and having women spoon-feed them and calling it love for the longest time. Is it cute to have an overgrown male child who throws a fit and refuses to eat or shower until he knows where his wife is? IMHO, that just does not sound like love. In 2022, when we’re all talking about being strong, independent women, it’s not very practical to have an overgrown male tugging at your clothes asking to be fed and bathed.

Why does a 39-year-old man need to know his wife’s whereabouts in order to do the most basic human things? Why do men expect their wives to mother them? And what makes them think it’s okay to be such manbabies?

At the beginning of 2022, a TikTok trend had people talking about weaponized incompetence or strategic incompetence. This term is the act of feigning incompetence in order to get out of doing it or have someone else do it for you. And we know men have been doing it for the longest time. They’ll simply feign incapability and then heavily depend on the women of their lives and then call it love. Now, imagine, a fully-grown man telling a woman that he cannot feed himself because he can’t cook and have her feed him or a man saying he cannot iron his own clothes and have a woman do it for him. All these television shows romanticise a woman picking out clothes for her man and placing them on the bed for him to come from the shower and dress up. But I’m sorry, why can a man not pick out his own damn clothes before he goes to shower?

Also Read: Neelam Kothari, Bhavana Pandey Don’t Want To Say The Word “Vagina”. Why Are We So Intimidated By Our Lady Parts?

While I completely understand that women think it’s cute that their partner need them all the time but at the same time it’s extremely essential to understand that it’s unhealthy if your partner just cannot do without you. I mean, if you need to leave someone in charge of your husband when you’re not around, is he really your husband or your kid? The fact that Alia Bhatt agreed with Ranbir and said that he cannot do anything without her especially if it’s health related stuff and leaves things for last minute if she’s not around, sets a dangerous precedent. Why are we okay with men expecting their wives to mother them?

Ranbir depending on Alia to the point where he refuses to take care of his own self is not cute or adorable. And as much as the society asks us to romanticise this, we need to understand that this is problematic AF. Alia Bhatt enabling Ranbir’s behaviour is continuing an unhealthy pattern wherein men turn into manbabies and expect women to be at their beck and call all the time. Moreover, I think it’s time we women learn the difference between love and men feigning incompetence. Not being able to take care of their ownselves and asking their wives to do it, is not love! That’s just men being lazy and feigning incompetence to have women do all the work. Also, dear men, quit depending on the women of your lives and calling it love while women do all the heavy lifting in a relationship and practically do slavery only to be taken for granted.