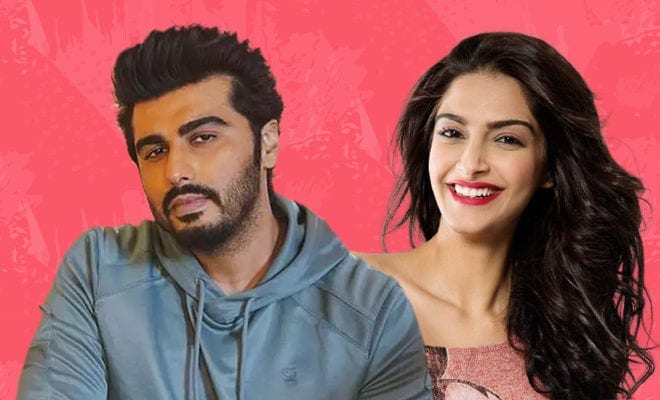 They say your cousins are your first friends and we know that Sonam Kapoor and Arjun Kapoor, have always shared a good bond. Sonam Kapoor’s father Anil Kapoor and Arjun Kapoor’s father, Boney Kapoor are real brothers. While Arjun had a strained relationship with his father after he got separated from his mom, he maintained a good relationship with the family. Sonam and Arjun even went to the same school.

In a recent conversation with radio host Sidharth Kannan, Arjun Kapoor got candid about the time when he went home with a black eye, because of Sonam! This was when both of them were teenagers. Arjun Kapoor revealed that both of them loved playing basketball in school. On one of the days, a couple of seniors came and snatched the ball from Sonam, and said it was their time to play. Feeling bullied, she went crying to Arjun.

“She said, ‘He behaved badly with me, this boy.’ I asked, ‘Who’s this boy?’ I am not a violent person at all. Neither in my childhood nor now. But I do get angry. I got angry and I went. That boy came and I abused him. He looked at me, kept staring at my verbal diarrhea of abuses, he just looked at me. He took his hand and punched me. I went back home with a black eye,” Arjun revealed.

This is adorable! Arjun Kapoor, being the protective guy that he is, come home with a black eye because he tried defending his sister. Of course, he was also just a teenager back then and dealing with a senior, who was a boxer! But it was sweet nevertheless and shows just how much he cares for Sonam Kapoor.

“I got the punch and had to go to the doctor. I got suspended because I abused. I was the instigator of the problem. After that I told Sonam, ‘you take care of yourself in school because I have been defamed very badly. I can’t do this’,” concluded Arjun.

Well, I bet he is better equipped to punch back now. But like he said, he is still not a violent person and Sonam Kapoor has bodyguards to protect her. And if she’d be playing basketball, the boys won’t snatch the ball away from her but watch with their jaws on the floor. The mean boy must be regretting his actions now!