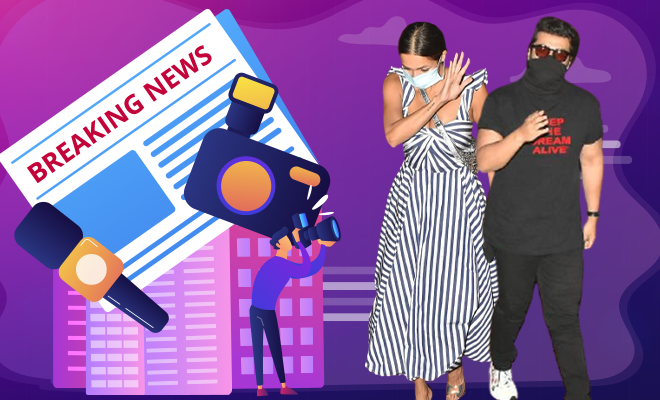 Unpopular opinion: Bollywood celebrities and paparazzi are equally dependent on each other. It’s simple, you see. The pictures the paps click give the celebrities publicity. One can barely survive without the other. That being said, the pressure on the paps to be the first ones to catch a glimpse of the celebrities have made them do some very questionable things. There are been instances where the pap has zoomed into a celebrities house or followed them to their car and even clicked pictures despite being told to back off. And while most of the times the celebrities engage and oblige, sometimes the photographers just cross a line. Recently Anushka Sharma had called out this ugly pap culture and now Arjun Kapoor scolded a photographer for climbing a wall to click pictures of him and Malaika Arora. This is madness.

At the risk of sounding like a hopeless Bollywood fanatic, let’s not deny that Arjun Kapoor and Malaika Arora are one of Bollywood’s hottest couples. They kept their budding romance under wraps for so long that now everyone wants to know all the details. This obviously means that paps are overly eager to capture that money-winning shot of them. So when Arjun and Malaika went to visit Kareena Kapoor Khan, who just had her second baby, paparazzi were all over them.

Amid all that chaos, when Arjun and Malaika were leaving Kareena’s residence, one photographer thought it would be a good idea to climb the wall of the building to get a good shot of them. This didn’t sit well with Arjun who sternly told him to get off the wall and not click any more pictures. According to a report by Zoom, Arjun lost his cool with the pap and told him, “Thoda tameez rakho. Woh request kar rahey hai apse, yeh galat hai. Aap neechey utro. Aap building ke wall par aisey maat chadha karo.”

Also Read: “Stop This Right Now.” Anushka Sharma Calls Out Photographer For Invading Her Privacy. We’re Glad She Did

Even after this the photographer continued his antics and tried clicking pictures of Arjun and Malaika. And when Arjun told him off again, he ran away. He told the pap, “yeh dekho ap maan bhi nhi rahey ho. Bhaisaab idhar aao, laal shirt walley, kyu dar ke bhaag rahey ho.”

This is really shameful. I understand that the paparazzi are just doing their job by clicking celebrity pictures but this is unacceptable. Celebrity or not, invading someone’s private life and clicking their pictures even after they’ve objected to it is crossing the line. This photographer in question shouldn’t have pretended to be spiderman and climbed the building’s wall to click photos. He could’ve just as easily asked Arjun and Malaika to pose in a more appropriate manner. We are glad that Arjun called him out. Hopefully, the pap culture that’s so in-your-face will eventually become more subtle.