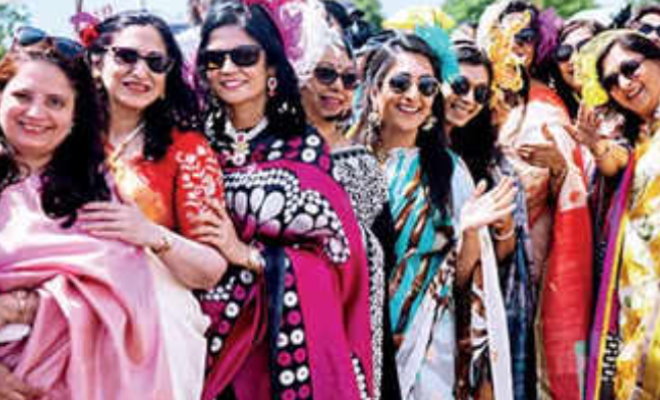 More than a thousand women of mostly Indian origin, made history on Thursday at Ladies’ Day at Royal Ascot when they all arrived dressed in sarees, some of which were made by a humble “Kantha” artisan from West Bengal named Rupa Khatun, who’d never heard of Queen Elizabeth II, let alone Royal Ascot. The royal family usually arrives in horse-drawn carriages to the famed racing meeting, where men wear formal morning suits and top hats and women wear dazzling hats.

However, Dipti Jain, a UK-based doctor from Kolkata, came up with the notion of a mass of ladies wearing sarees to Ascot to exhibit pride in their culture and to appreciate the works of Indian weavers. Most were from the United Kingdom, although some were from other countries, notably India.

Rupa Khatun, an artisan from Nanoor, West Bengal, hand-embroidered Jain’s silk saree with the London and Kolkata skylines, the Queen’s visage, Big Ben, a red phone box, and the Tower of London. She claims she never received any training in saree creation and instead learned from other women in the village, as well as her mother and grandmother. She went on to say that she is proud of herself and stated that she had never heard of the Queen, London, or Big Ben.

Also Read: Mouni Roy’s Latest Picture Declares She Is A Forever Saree Girl And We Think This One Is Tailor-made For Summers

Khatun also expressed gratitude for her acknowledgement. I am overjoyed that I am being recognised. She stated that she simply provides her sarees to a middleman who sells them in the market. Her village is well-known for its Kantha embroidery. Khatun also stated that this is the most difficult saree she has ever created and that she is used to traditional designs. The saree took her four months to make, with assistance from other women. According to TOI, Khatun added, “The hardest part was making the Queen’s face absolutely perfect.”

Tanima Paul, who supports Indian craftsmen in the UK, designed the saree and sent Google photos of Big Ben and the Queen to Khatun’s village mate, S K Nurul Hoda via WhatsApp. He drew them on the cloth, bought the materials, and Khatun created the saree. Just as the saree was about to finish the saree, Paul saw that London had been misspelt “Landon.” Khatun then fixed it.