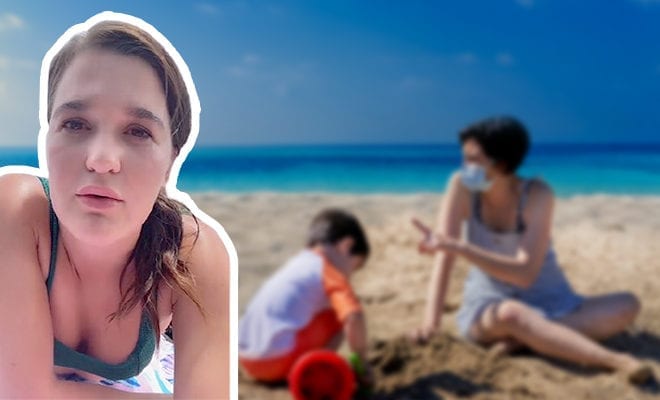 Woman At A Beach In Hawaii Got Bikini Shamed By An Angry Mother. What Are We Supposed To Wear To A Beach?

We all have a few toxic traits within us. For me it is the constantly need to please other people, for my brother it is to procrastinate things till the end moment and not do it even then, and for my best friend it is purposefully pick guys that are emotionally unavailable. But if there is one trait that most of the people in our society have in common, it is to police others on their personal choices. Something that a mother indulged in when she got mad at a fellow woman for wearing a bikini on a beach.

Yet another case of fashion policing has been reported, infuriating us wherein a woman was looked down upon for wearing a bikini on a beach in Hawaii. As opposed to the actual dress code for a beach we assume..

Calling Savannah Sims “inappropriate” while she was sunbathing in a bikini on a beach in Hawaii, this woman who is a mother of two, came to Savannah angrily to tell her that she had very well taken offence of her bikini. It was at this point, that both Savannah and anyone reading the story started struggling to understand how what she wore was any of the woman’s business.

Also Read : Bikini Clad Women Always Outrage Society. Why Do We Feel The Need To Police What Women Wear?

And to make matters worse, the woman did not just turn out to be straight up nosy, orthodox and misogynist but also a hypocrite. Sims went ahead to allege that the woman was a “hypocrite” because she also stripped down to a thong bikini, soon after she had asked her to leave the beach. Wow for selective judgement!

Savannah, who was naturally infuriated by the incident, took to TikTok to reiterate the entire thing and ended up gaining a lot of support from the netizens who could relate with her. She said, “So I just had the worst experience in Hawaii on the big island. I lay down at a spot that’s right off the road and this family gets out of their car and sits down kind of close to me. And the mum starts saying to her boyfriend, ‘no I can’t have that and ‘that’s not OK with me. I look up and she’s looking at me, so I ask if there’s an issue. She said she doesn’t want to see my butt and lady parts.”

She then went on to display the bikini she was wearing and continued to say, “To be clear, this is my bathing suit. Pretty frigging normal right? And this girl over there said that this happens all the time and she didn’t come here to see my body. I asked her what the issue was and what I needed to cover because she was with a kid so I was trying to be respectful. She just said that she wanted me to leave, I was in her way. So I got up and left and she said ‘mahalo’, and it ruined my day.”

The society as a whole needs to understand and accept the fact that women have the right to make their own choices, and that most of the times their unsolicited opinions best belong to their own selves and wardrobes. It’s time people stop feeling entitled to police others for what they put on their back, and mind their own business. After all, you wouldn’t want people come and tell you where that nose needs to be put in, right?

Also Read : In Kuwait, A Fashion Blogger’s Protest Against Harassment Has Sparked Off An Entire Movement